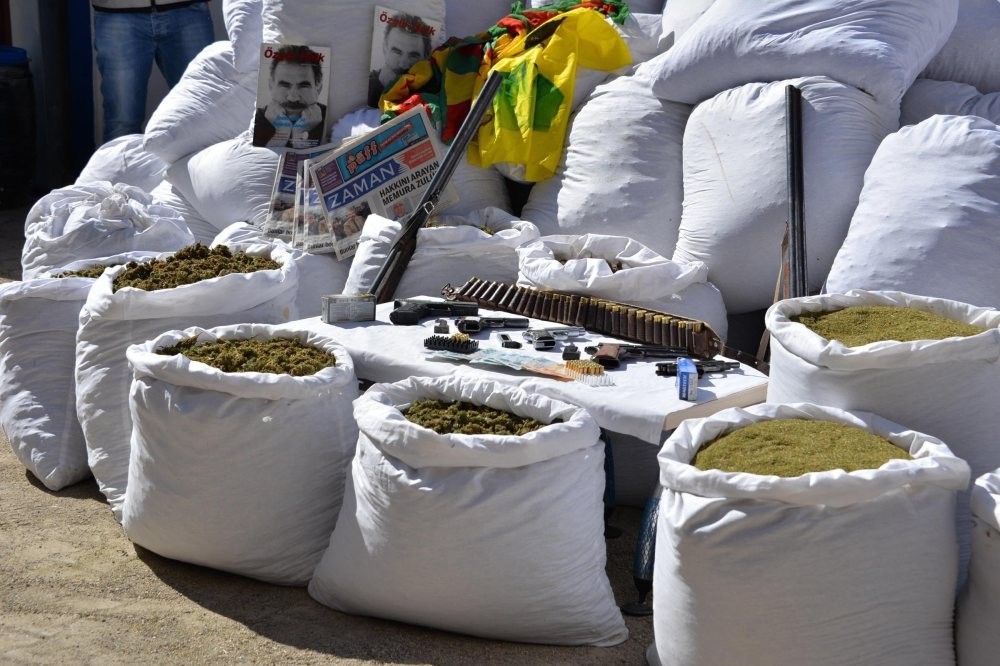 Sacks of cannabis seized in Diyarbaku0131r on display. On the far left are pictures of Abdullah u00d6calan, jailed leader of the PKK and Zaman newspaper, a now-defunct Gu00fclenist mouthpiece, found in the raid against PKK-linked drug traffickers
by Daily Sabah with AA Dec 02, 2016 12:00 am

As Turkey fights drug traffickers using it as a transit route, as well as the recent rise in the number of drug addicts, terrorist groups such as the PKK and FETÖ are trying to manipulate the illicit practice for monetary gains with the justice minister saying these two groups are 'poisoning' citizens

Members of the Cabinet have convened Thursday for a counter-narcotics coordinating meeting in the capital Ankara amid Turkey's growing concerns over drug trafficking and its fight against drug addiction among the youth.

Addressing the meeting, Justice Minister Bekir Bozdağ stated that terrorist groups including the PKK, the Gülenist Terror Group (FETÖ) and some others fund their illegal activities "like killing civilians, military and police in terror attacks" with revenue coming from illegal drugs that are "poisoning the public."

"We have to understand that an efficient clampdown on drugs will also help our anti-terror struggles," Bozdağ told his fellow ministers, noting that drugs have been the primary source of income for all the terrorist organizations.

"Those failing to take measures against drug trafficking, sales and those who do not tip off authorities on this sort of crimes are all complicit in terror crimes," the minister said.

The outlawed PKK, which claims to fight for Kurdish self-rule in the southeastern Turkey, has killed hundreds since it resumed its campaign of violence last summer targeting civilians and security forces, mostly in the country's southeast.

The militant group has been active since the 1980s and is involved in both drugs trafficking as well as production, particularly in Lice, a southeastern town, frequently subject to counter-narcotics operations. In June this year, some 20.2 million cannabis plants and three tons of hashish were confiscated in the town.

According to an Interior Ministry report, the PKK earns more than $1.5 billion every year from drug production and trafficking. Although no concrete numbers are available, authorities believe about two-thirds of the illegal cannabis cultivated in Turkey is grown around southeastern Diyarbakır. The Interior Ministry's report also claims that the PKK produces heroin in laboratories in its camps in Northern Iraq and sells it in Europe through its supporters in the continent.

The FETÖ, on the other hand, poses a new challenge for the authorities as it differs from conventional terrorist groups due to its extremely secretive nature and masterful disguises adopted by its members infiltrating law enforcement forces, the army, the judiciary, and even counter-narcotics units of police itself.

Unlike the PKK, the FETÖ adopted a legitimate front and ran a network of "legitimate" companies, many of which has faced since Turkey stepped up its crackdown on the group after it masterminded the July 15 coup attempt.

Five anti-drug operations, one of them abroad, were carried out by narcotics officers against the FETÖ this year.

24 FETÖ suspects were detained over the past months during operations in several Turkish provinces including Gaziantep, Kayseri, Malatya, and Erzurum and additionally in Dubai. In these operations, police seized some 800,000 Captagon pills, 252 kilograms of cocaine and 226 cannabis Sativa roots.

The 800,000 pills were seized by Turkish and United Arab Emirates (UAE) police during a joint operation in Dubai. Three suspects, including the founder of FETÖ's drug network, identified only as Ibrahim I. were held in the incident.

The pills' were valued at almost 25 million Turkish liras ($7.7 million).

As part of the same investigation in Turkey, eight more suspects already in custody were remanded for trial by Turkish law enforcers.

Turkey has stepped up its counter-narcotics efforts in recent years with new action plans to tackle the problem in the country which is often used as a transit route for drugs from Asia to Europe and vice versa, and following the emergence of a new wave of synthetic drugs plaguing the youth.

Speaking at Thursday's meeting, Interior Minister Süleyman Soylu said counter-narcotics units have become even more active after they set up a new directorate under the Turkish National Police to fight drug trafficking.

He said they have also maintained cooperation and communication with other countries regarding international drug trafficking and since 2002, the government has conducted 258 joint counter-narcotics operations with 38 countries.

"In 2016, we seized 1.1 tons of cocaine in seven different operations jointly conducted by five countries," he said.

The minister complained that despite Turkey being praised by Europe for its battle against drugs, Europe itself has failed to curb the flow of synthetic drugs from the continent to Turkey.

"New drugs, such as 'Bonzai' [a notorious and cheap synthetic drug in Turkey] originate in Europe. We have also lost many young lives, addicted to ecstasy pills produced in the Netherlands, Belgium, Germany and the Czech Republic," he said.
RELATED TOPICS