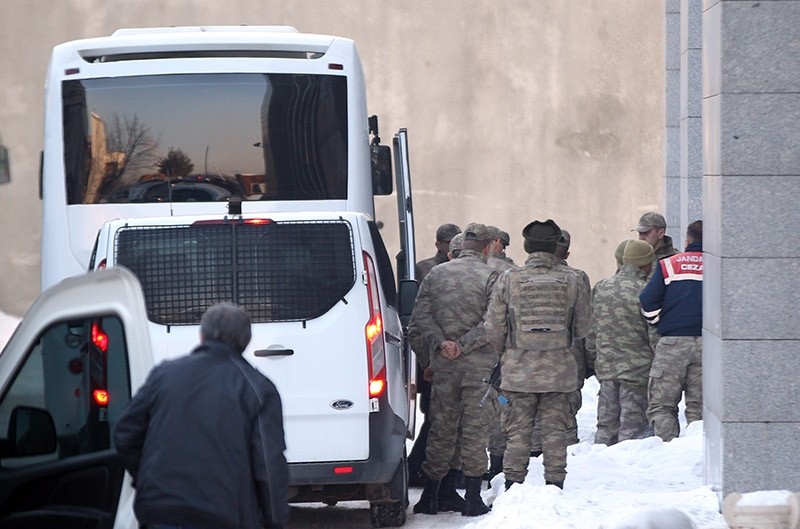 The first verdict in a trial related to the July 15 coup attempt blamed on the Gülenist Terror Group (FETÖ) was issued by a court in eastern Turkey. Two career officers were sentenced to aggravated life imprisonment on charges of "violating the Constitution," the formal name for a military coup attempt. Staff Col. Murat Koçak and Staff Major Murat Yılmaz, who served as military commanders in a gendarmerie base in the eastern city of Erzurum, are the first to be sentenced among thousands of officers arrested after the coup attempt that killed 248 people. Koçak was the "martial law commander" of pro-coup troops in Erzurum while Yılmaz, former head of operations at a local military unit, was on a list designated by pro-coup soldiers to replace the commanders opposing the coup. Yılmaz was also a user of ByLock, an encrypted messaging app almost exclusively used by FETÖ members, and he was in "the red category" designated for frequent exchanges among the terror-cult members over the app. The defendants rejected the charges and denied involvement in the coup, but the court did not reduce their sentences, a common practice in the cases involving the most violent crimes. The trial in Erzurum was one of the first trials against the pro-coup troops in the country, while another trial is being held in the western city of Denizli for officers involved in the putsch attempt. The coup-attempt trials for military officers in major cities, such as Istanbul, are scheduled to start in February, but some 29 police officers accused of aiding pro-coup troops in Istanbul are already on trial facing life sentences. Similar verdicts are expected in other cases on the coup attempt as all defendants face the same charges with Koçak and Yılmaz, in addition to charges related to membership of FETÖ.

Erzurum is the hometown of Fetullah Gülen, the leader of FETÖ who lives in self-imposed exile in the U.S.