Daesh on the ropes as Turkey redoubles operations after gunman captured 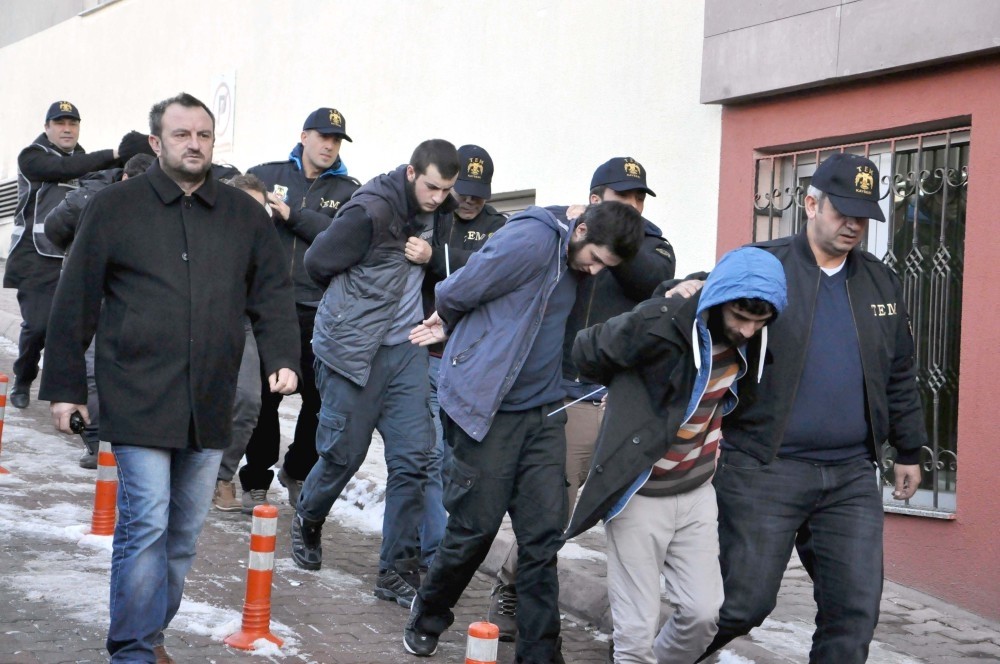 Police escort Daesh suspects to the courthouse in central city of Kayseri.
by Daily Sabah with Wires Jan 19, 2017 12:00 am

Daesh is feeling the heat as Turkey expands its operations following the successful capture of a gunman who killed 39 at an Istanbul nightclub. Meanwhile, local media reported that the identified gunman confessed he received orders from Daesh leaders in Syria and the original target was Taksim Square

A few days after it issued a video message threatening to carry out attacks in Istanbul, the Daesh terrorist group is feeling the wrath of the state's security forces, which are leading anti-terror efforts in the region against Daesh militants. Late Monday, Turkish police succeeded in capturing Abdulgadir Masharipov alive, an Uzbek-born militant of the group in Istanbul where he gunned down 39 people in a popular nightclub during New Year's Eve celebrations. More operations netted more than 30 suspects, including one carrying explosives, across the country while local media revealed the confessions of Masharipov, who was arrested in the city's Esenyurt district in an apartment he was hiding in with his alleged accomplices.

Masharipov said he originally intended to carry out an attack in Istanbul's popular Taksim Square. Daesh, listed as a terrorist group by Turkey a few years ago when it emerged as a serious security threat in unstable Iraq and war-torn Syria, was quick to add the country to its list of adversaries and took turns with other terrorist groups to kill dozens in a string of attacks in Turkish cities. Just as Turkey heightened its support for the opposition in Syria to strike Daesh, 34-year-old Masharipov, who entered Turkey in January 2016, stormed the Reina nightclub on the Bosporus shore with an AK-47 rifle in hand and murdered revelers, mostly Arab tourists.

Some 17 days after the attack that took place about one hour after Turkey welcomed the new year, the terror suspect was found hiding in an Istanbul suburb and was seized by anti-terror police in a raid where not a single shot was fired.

More arrests and detentions followed on Tuesday and yesterday and in a town bordering with Syria, security forces captured a Daesh suspect carrying explosives. The first operation was in Bursa, a city south of Istanbul, and 27 people, members of a sleeper Daesh cell, were detained. Suspects include a person who shared a home with Masharipov while the latter was staying in the central city of Konya. The suspects are charged with offering homes to fellow Daesh militants from other countries. Police found fake IDs in their possession. One suspect identified only as M.S. is accused of finding rental homes in Istanbul for Daesh suspects. In the central city of Konya, where Masharipov lived briefly with his wife and children before moving to Istanbul, nine suspects were detained for online propaganda of Daesh and liaison with Daesh suspects. In Kayseri, authorities remanded 11 suspects into custody yesterday. Suspects are charged for terror propaganda and recruiting militants for Daesh.

Perhaps the most important operation against Daesh was in Akçakale, a town in the province of Şanlıurfa which borders with Syria where the terrorist group controls a shrinking stretch of lands. A man identified as Aboud Mahho was captured as he sneaked into Turkey and is accused of working as a "courier" for the terrorist group, carrying weapons and ammunition. The Syrian suspect confessed to burying a stash of weapons in an area near the border. Police found 3 kilos of RDX explosives and material used for the production of suicide bomber vests.

Police so far clamped down on 20 Daesh sleeper cells and rounded up suspects mainly from Central Asian countries. Masharipov, who was wanted by Uzbekistan on charges of membership of a terrorist organization, was trained in Afghanistan before he switched allegiance from al-Qaida to Daesh, according to the media reports. Security experts say the terrorist group, which consists of mostly foreign recruits from Europe and other countries, also draws followers from Central Asia.

During the manhunt for Masharipov, police in Istanbul raided some 152 locations and 50 suspects were detained prior to the capture while 168 foreigners were detained for possible links to Daesh. In a separate investigation against Daesh, the Istanbul chief prosecutor's office asked yesterday for the arrests of 28 out of 33 suspects detained in recent anti-terror operations. Eight others remain at large.

Masharipov remains in a solitary detention ward as his interrogation continues and his initial testimony was leaked to the press yesterday. Quoting his testimony, Hürriyet newspaper said he was ordered by a Daesh "contact" in Syria's Raqqa, the self-declared capital of the terrorist group in Syria, to carry out an attack in Istanbul when he was staying in Konya. He traveled to Istanbul in December and did reconnaissance in Taksim Square. Prior to his capture, his only known image widely circulated in the media was a selfie video taken at the square. Masharipov said he backed out on carrying out an attack in Taksim, a popular venue for New Year's Eve celebrations, due to heavy police presence. When he told this to his "contact," he was ordered to find a new target. He took a taxi across the Bosporus shore and decided to target Reina when he spotted security measures were not high. When his Raqqa contact approved it, he carried out the attack.

Security experts say the Reina attack is an unprecedented act of terror for the part of Daesh and capturing Masharipov alive is a success for the police. Metin Gürcan, a security analyst specialized in studying Daesh, told Anadolu Agency that Daesh often resorted to suicide bombings or "hit and run" type attacks and this is the first time a Daesh perpetrator has been caught alive. "Now the police can link the perpetrator to masterminds and I hope they share it, at least partially, with the public," he said. Gürcan also pointed out other interesting details regarding the attack such as the discovery of a large amount of money in Masharipov's possession. "It is apparent he was paid for the attack and the investigation may reveal financial sources of the terrorist group," he said. He also claimed "an international network" helped the terrorist to carry out the attack. He said Daesh stepped up its attacks in Turkey after it was cornered in Syria's al-Bab by rebels backed by the Turkish army.

Speaking to Anadolu Agency, Justice Minister Bekir Bozdağ said the capture of the Daesh gunman was important as it would help authorities to access more information regarding the terrorist group. Bozdağ added that it would also help security forces to be more vigilant in preventing possible future attacks by the terrorist group.
RELATED TOPICS