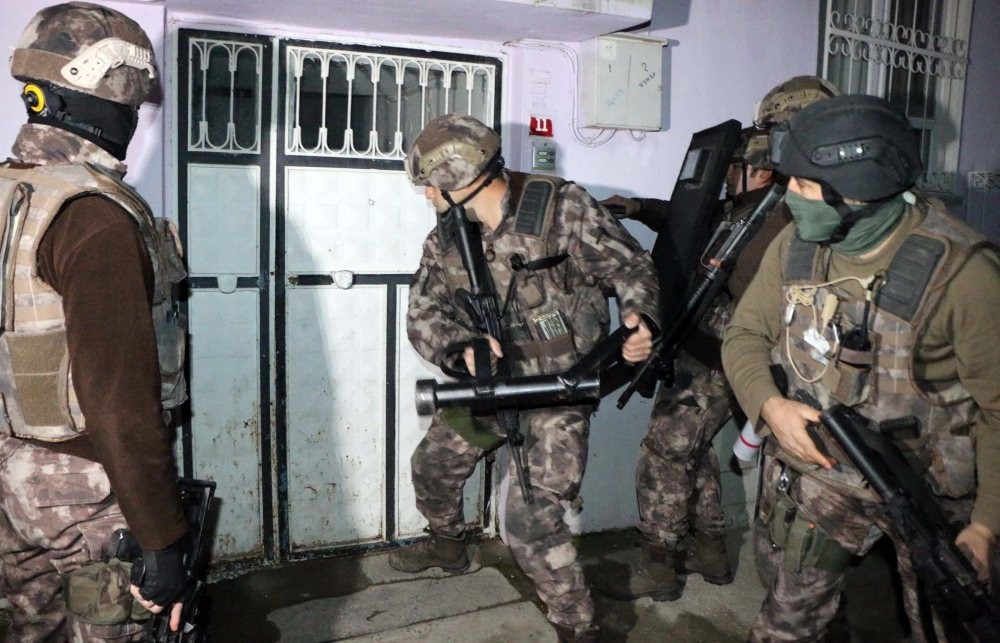 Anti-terror police storm a house where the Daesh suspects stay in Adu0131yaman on Feb.5. The terrorist group faced a nationwide crackdown earlier this month that netted hundreds of suspects.
by Daily Sabah Feb 18, 2017 12:00 am

A court in Istanbul accepted an indictment for 35 Daesh suspects on Friday, paving the way for life terms for the defendants who are accused of plotting to bomb Parliament and a mosque as well as running ‘a school' to train Daesh members' children

Thirty-five suspects from the Daesh terrorist group now face life imprisonment, after an Istanbul court on Friday accepted an indictment against the defendants accused of plotting to attack Parliament, a Shiite mosque and a branch office of the ruling Justice and Development Party (AK Party).

Twenty-eight defendants who are already in jail are scheduled to appear before a court on April 20, while court summons will be issued for the rest. The suspects were arrested in operations by the Istanbul police last December.

Six of the suspects are accused of plotting terrorist attacks, membership to a terrorist group, and "attempting to overthrow the constitutional order," which carries the heaviest punishment, a sentence of aggravated life imprisonment.

Selim Sümeli, one of the defendants, was monitored and observed doing "reconnaissance" with the purpose of conducting an attack around Zeynebiyye Mosque in Istanbul's Küçükçekmece district, as well as the Ankara headquarters of the AK Party and in the courtyard of Parliament, also in the capital. Zeynebiyye Mosque is attended by Caferis, a local branch of Shiite Muslims.

The suspects are also accused of running an illegal "school" to train children of Daesh members both in Turkey and in Syria and Iraq where the terrorist group remains most active. Most of the suspects are Turkish nationals and along with life sentences, they face prison terms up to 15 years for lesser terror-related crimes.

Turkish media has recently released police photos of Sümeli, a bearded man seen in videos with a shorter beard and suits, walking around the sites of possible attacks. Sümeli traveled to Ankara from Istanbul on Oct. 12, 2016 and returned on the same day to Istanbul after walks around Kocatepe Mosque - a mosque where most politicians attend prayers - in addition to AK Party offices and Parliament, according to police. He did not contact anyone during this brief visit, the indictment says.

The indictment also says the reconnaissance mission was ordered and instructed by two Turkish nationals who are currently in Syria. Two men, Metin Ç. alias Abu Darda al-Turki, and Mustafa G., also known as Abu Hamza, are senior militants in the terrorist group. Prosecutors also say Sümeli contacted three others to carry out the attacks.

The terrorist group also ran what they called "a children's school" in the Sultanbeyli district of Istanbul as well as "an education institute" where children of Daesh members killed or fighting in Syria and Iraq were being taught the militants' ideology. Fatma Küçük, a female Daesh member who managed the schools, remains at large. "Daesh brainwashed the children and some children had signs of radicalization," the indictment says. Prosecutors also note that the terrorist group had a warehouse in the Sultanbeyli district it used for gatherings where new recruits were trained in the ideology.

Since it emerged as a major threat in unstable Iraq and war-torn Syria a few years ago, Daesh has carried out a string of attacks in Turkey, which it includes in its list of foes. Some 277 people were killed in Daesh attacks and the most recent assault was during New Year's Eve celebrations in Istanbul, where 39 people were gunned down by a lone Daesh militant. Following that attack, Turkey has launched nationwide operations that netted more than 700 suspects. Turkey has also killed a large number of militants in Operation Euphrates Shield in Syria where the Free Syrian Army (FSA) is supported by the Turkish military in its fight to retake towns captured by the terrorist group.

According to Interior Ministry figures in 2016, security forces detained 3,359 suspects, and 1,313 of them, including 679 foreign nationals, were arrested due to links to the terrorist group. The ministry has also said between 2011 and 2016 a total of 7,015 people, including 2,712 foreign nationals, were arrested for their links to Daesh, with 2,304 of them being taken into custody.
RELATED TOPICS