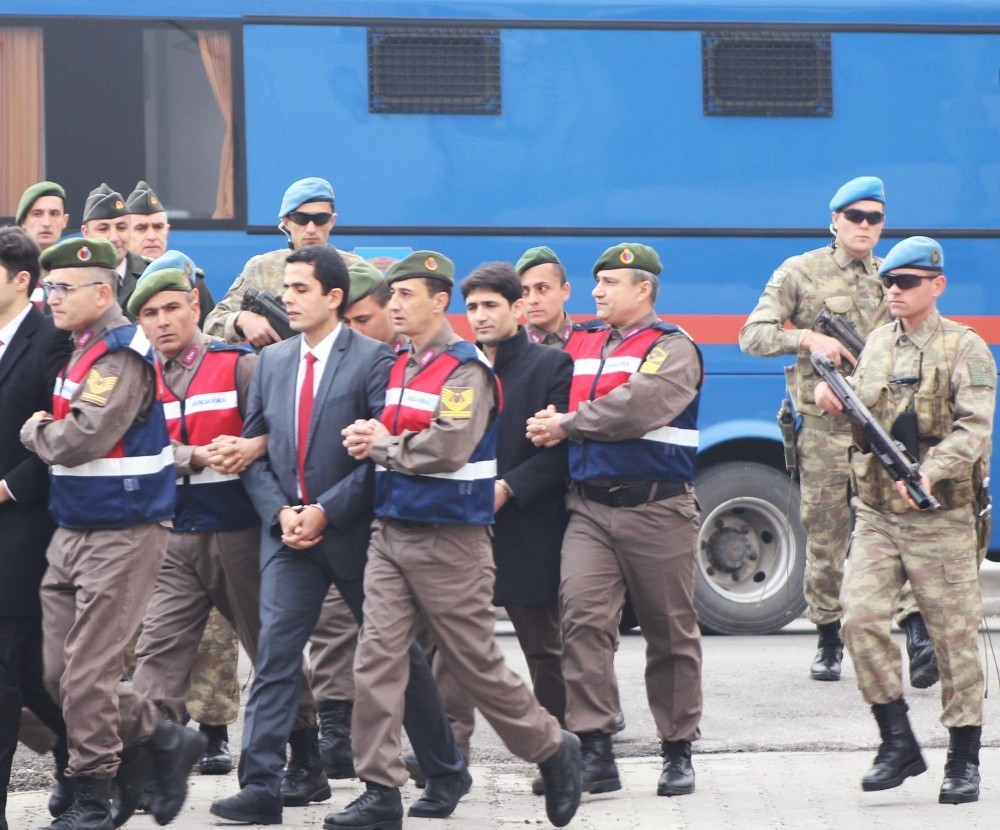 In the week-long July 15 coup trials, the defendants claimed that they joined the putsch bid simply to follow the orders of their superiors, while an officer sent to kill the president admitted he ‘lost hope' for a clean getaway when he heard the ‘sala' being called from minarets

The trials of officers who joined the July 15 coup attempt were underway on Thursday all across the country. Most of the defendants admitted that they followed the orders of their superiors to join the coup, which is blamed on the Gülenist Terror Group (FETÖ), while an officer recounted how he "lost hope" to escape when he heard a recitation of "sala," a call to prayer that echoed across the country in a bid to urge people to take to the streets.

On Thursday's hearing in the southwestern city of Muğla where 47 defendants are on trial for attempting to assassinate President Recep Tayyip Erdoğan, Capt. Muammer Gözübüyük told the court how they arrived at the hotel where Erdoğan was staying and of their escape following a shoot-out with the guards.

Gözübüyük was one of the members of the two teams of assassins dispatched to the hotel in Muğla where Erdoğan was staying at with his family. The president and his family managed to escape with just minutes to spare when he found out a coup was unfolding across the country.

Some 248 people were killed in the coup attempt, including two police officers who were on duty guarding the president when Gözübüyük and others stormed the hotel.

The captain, who was dismissed from the army after the coup and captured days later along with other would-be assassins, claimed he was not aware of a coup attempt when Maj. Şükrü Seymen, another defendant, called him for a mission on July 15.

He claimed he did not know about the coup attempt up until Gen. Gökhan Şahin Sönmezateş, who is also among the defendants, told him and the others when they converged in a military base that the "army seized power and declared martial law." He said Sönmezateş told them they would directly respond to the army chief and their mission was to "take the president."

Gözübüyük claimed, like several other defendants who testified before him, that their intent was not to kill the president.

Some of the defendants claimed they were told they would capture a high-profile terrorist while others told the court they knew they were there for the president.

None of the defendants were able to explain why they took heavy arms and thousands of bullets with them if they were sent to "take Erdoğan alive."

Gözübüyük claimed that the police guarding Erdoğan's hotel started firing at them first and when they failed to find Erdoğan, they fled. He said a helicopter sent by coup plotters was supposed to rescue them but it could not land when the police opened fire on it and they decided to flee on foot.

"Even on July 16, I believed that the helicopter would take us. It was only after I heard 'sela' being recited that I lost hope," he told the court.

"Sela" echoed across the country as the coup was still underway when the Presidency of Religious Authority overseeing the mosques urged its imams and muezzins to recite the call, along with a message urging the people to take to the streets in response to the putsch bid.

Gözübüyük said he could have "disappeared like Burkay Karatepe," the only would-be assassin that remains at large, but he said he "chose to tell the facts to his family." He denied the allegations that he was linked to FETÖ.

Capt. Ergün Şahin, another coup soldier who was part of the assassination team, said he "followed orders" when his superiors told him that the army seized power, instead of opposing the coup like the 248 people who were killed when they confronted the pro-coup troops.

Şahin also claimed that their mission was to capture Erdoğan alive, He also said they decided to flee instead of surrendering, claiming the police officers "fired at them repeatedly" when they tried to surrender. Şahin, who faces life imprisonment for his role in the coup attempt, said he believed he would "return" to his job.

"I have been in top secret missions and I joined the Special Forces by recommendation of the (former) army chief," he told the court, adding that he was not guilty and "only followed orders."
RELATED TOPICS