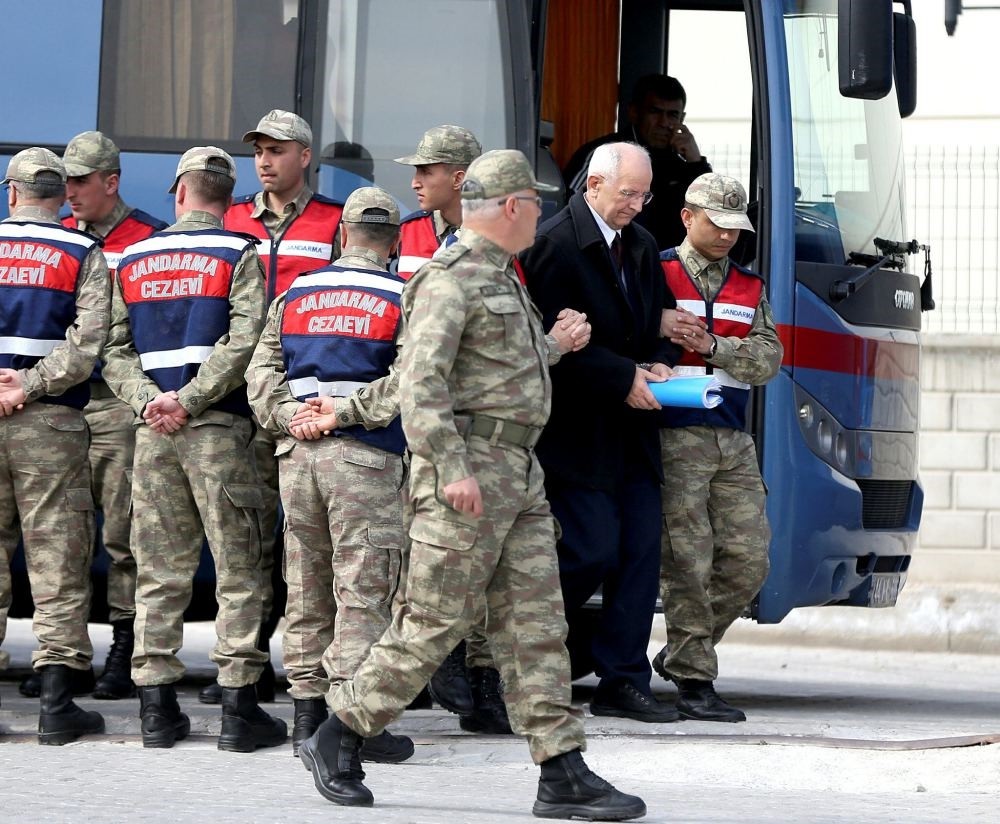 Troops escort Huduti to the courtroom for the hearing.
by Compiled from Wire Services
Mar 08, 2017 12:00 am
Former general, Adem Huduti, who was heading the powerful Second Army Command of the Turkish Armed Forces (TSK) when the July 15 coup attempt unfolded, appeared before a court in eastern Turkey on Tuesday.

Huduti, who was detained at his military base in the province of Malatya, said he was designated for leadership of the coup attempt that is being blamed on Gülenist Terror Group (FETÖ), but refused it. The general was among the 76 defendants on trial for the coup attempt during which 248 people standing against coup plotters were killed.

Huduti, who famously told his subordinates and accomplices in the coup, "Boys, you got me into trouble" as he was being escorted to prison after the foiled putsch bid, is accused of inaction against the coup. It is not clear whether he played a part in masterminding the coup which was led by a junta who called itself the "Peace At Home Council."

Coup plotters were instructed to stage the coup by FETÖ, whose infiltrators in the army moved to seize power by a series of takeovers of military bases and the abduction of anti-coup generals. Strong public resistance quelled the coup and thousands of military officers behind the putsch were arrested.

Prosecutors say in their indictment that Huduti's name was on the list of generals cooperating with the coup plotters. A confidential document found in possession of the coup plotters had Huduti's name as the post-coup commander of the Second Army, which oversees security in an area covering Turkey's Iraqi and Syrian borders.

"Huduti knew who the pro-coup officers were and it was illegal for the army to seize power. Despite this fact and having the opportunity to quell the coup attempt, he didn't act. Moreover, he repeatedly blocked the attempts for the capture and neutralization of pro-coup soldiers. Unlike other army commanders who openly declared they were against the coup, the commanders who used their authority to stop the coup attempt, Huduti never used his authority," a damning indictment against Huduti reads.

The general and other defendants, all military officers, face three instances of life imprisonment each as well as lower prison sentences for the coup attempt and membership of a terrorist group in reference to FETÖ.

Huduti was scheduled to testify before the court when Daily Sabah went to print.

Enes Gün, a plaintiff who was injured when coup troops opened fire on a crowd of civilians confronting them outside the Malatya base, was the first to speak in yesterday's hearing. Gün said he and his brothers rushed to the Second Army Command when they heard about the coup attempt.

"I was there to defend my country," Gün told the court.

He said he climbed atop a civilian truck at the entrance of the base and was unarmed.

"I was standing there to show that I was not intimidated by the coup attempt. Then, I heard a couple of gunshots. I saw two soldiers shooting towards me. I had no gun, not even a stone or stick on me. They weren't defending themselves when they fired at me," Gün recounted.