Dozens detained in probe into FETÖ's clout in military 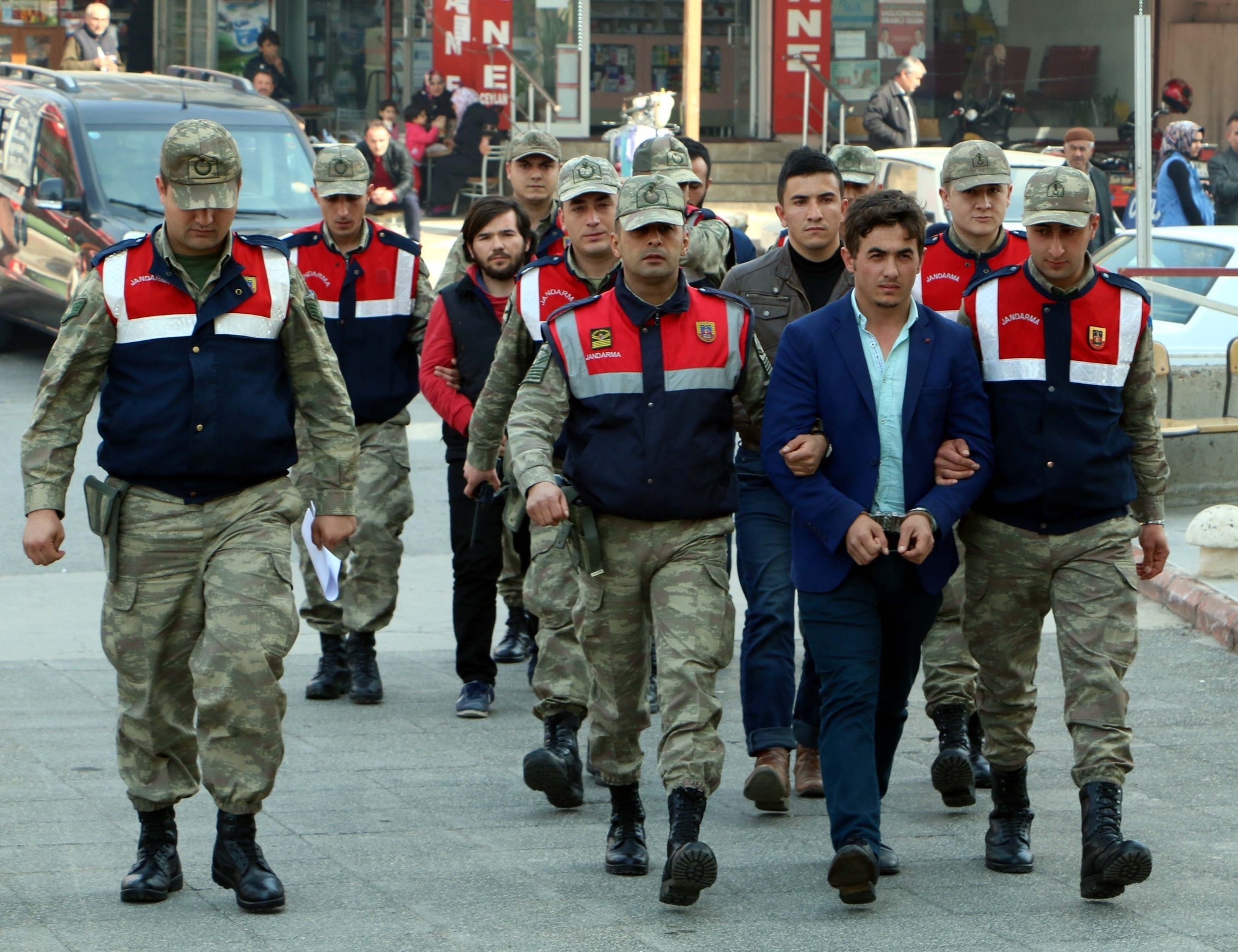 Gendarmerie troops escort FETu00d6 suspects captured in the southern city of Kahramanmarau015f. The suspects are accused of overseeing FETu00d6u2019s activities in the army through its infiltrators.
by Daily Sabah Mar 09, 2017 12:00 am

Security forces on Wednesday detained 40 suspects accused of recruiting members for the terrorist cult, FETÖ, at an early age and helping them infiltrate military schools. Prosecutors also issued detention warrants for 105 others in a nationwide operation against the group, which is blamed for the July 15 coup attempt

Months after it orchestrated a military coup in an attempt to seize power, the Gülenist Terror Group (FETÖ) faces a new wave of crackdowns, as Ankara has vowed to weed out its infiltrators in the army.

Meanwhile, prosecutors in Istanbul issued detention warrants for 145 suspects accused of recruiting children into the terrorist group and helping them enroll in military schools. Forty people were detained in police operations across the country, while 105 others remain at large.

The ongoing crackdown that followed shortly after the July 15 coup attempt, during which 248 people were killed by pro-coup troops loyal to a Gülenist junta, was part of two separate investigations by Istanbul-based prosecutors. Prosecutors are investigating the "civilian structure" of FETÖ that commands military officers loyal to the cult led by Fetullah Gülen, who currently lives in the U.S. Gülen is accused of appointing "imams" or point men, who would relay his orders to military officers or act on his behalf in masterminding the coup plot.

Among the suspects were military officers linked to the group as well as civilians. All of the suspects who were former officers or had worked in the army are accused of being FETÖ infiltrators in the Turkish Armed Forces. The Anadolu Agency reported that military officers linked to the group were in possession of ByLock, an encrypted messaging app almost exclusively used by FETÖ. The app was used before and after the coup attempt to relay messages within the group. Some suspects who were military officers were among senior cadres of the terrorist group, according to the prosecutors. As for the civilian suspects, prosecutors identified them as "brothers," a term commonly used by the group to identify each other. The so-called "brothers" were high-ranking members of the terror cult who were in charge of military officers loyal to the cult. They directed the military officers to carry out the orders given by the group during the coup attempt. Most of the group's members were users of ByLock, which emerged as the key communication tool for FETÖ members during the coup attempt. The group used the app to exchange encrypted messages about the operations of the terrorist group.

Prosecutors say some suspects who worked as point men for FETÖ convinced the families of children living in Anatolia, which is the inner part of Turkey where a mostly conservative and nationalist population lives, to let their children pursue studies in Istanbul. The group helped children find accommodation in informal dormitories run by FETÖ. Children staying there were persuaded to enroll in military high schools, and they were assigned to "brothers" who kept in touch with military school students during their education and after their graduation. Based on the testimonies of former officers linked to FETÖ, the terrorist group kept a close eye on students using the men they called "brothers." The group's followers were instructed to carry out orders given by senior cadres, such as reporting on those working to detect pro-FETÖ officers in the army. Their last order was joining the coup attempt that was ultimately foiled thanks to strong public resistance.

The terrorist group, which started out as a religious movement focused on charity, quickly expanded its national and international influence. In the past three decades, the group built a sprawling business and education empire by setting up schools and companies spanning four continents. Though its clout was known in Turkey prior, it was in 2013 that the cult showcased its ability to threaten Turkey by two attempted coups. After the two efforts failed, the group was declared "a national security threat" and saw thousands of its members dismissed from their jobs in law enforcement, the judiciary and bureaucracy. Undaunted, the group masterminded yet another coup attempt, and it now faces a fresh crackdown by authorities that dismissed thousands and arrested hundreds linked to the group. Its leader Fetullah Gülen, who faces multiple life sentences, resides in the U.S. in a Pennsylvania estate. He refuses to return to Turkey where he is accused of running a terrorist group, masterminding plots to imprison critics, blackmail, to launder money and other serious offenses.

Security forces carry out operations against FETÖ almost daily, and as prosecutors round up suspects, police in southern Turkey have detained 104 suspects, mostly academics, who used to work for a FETÖ-linked university in the province of Hatay. Suspects include professors and associate professors still working in the university, and those dismissed by decrees that were part of state of emergency after the July 15 coup attempt. Elsewhere in southern Turkey, anti-terror police detained 23 police officers in the provinces of Adana, Osmaniye, Hatay and Antalya for their links to the terror cult.
RELATED TOPICS