Coup plans hatched in 2015 in an Ankara villa: Prosecutors 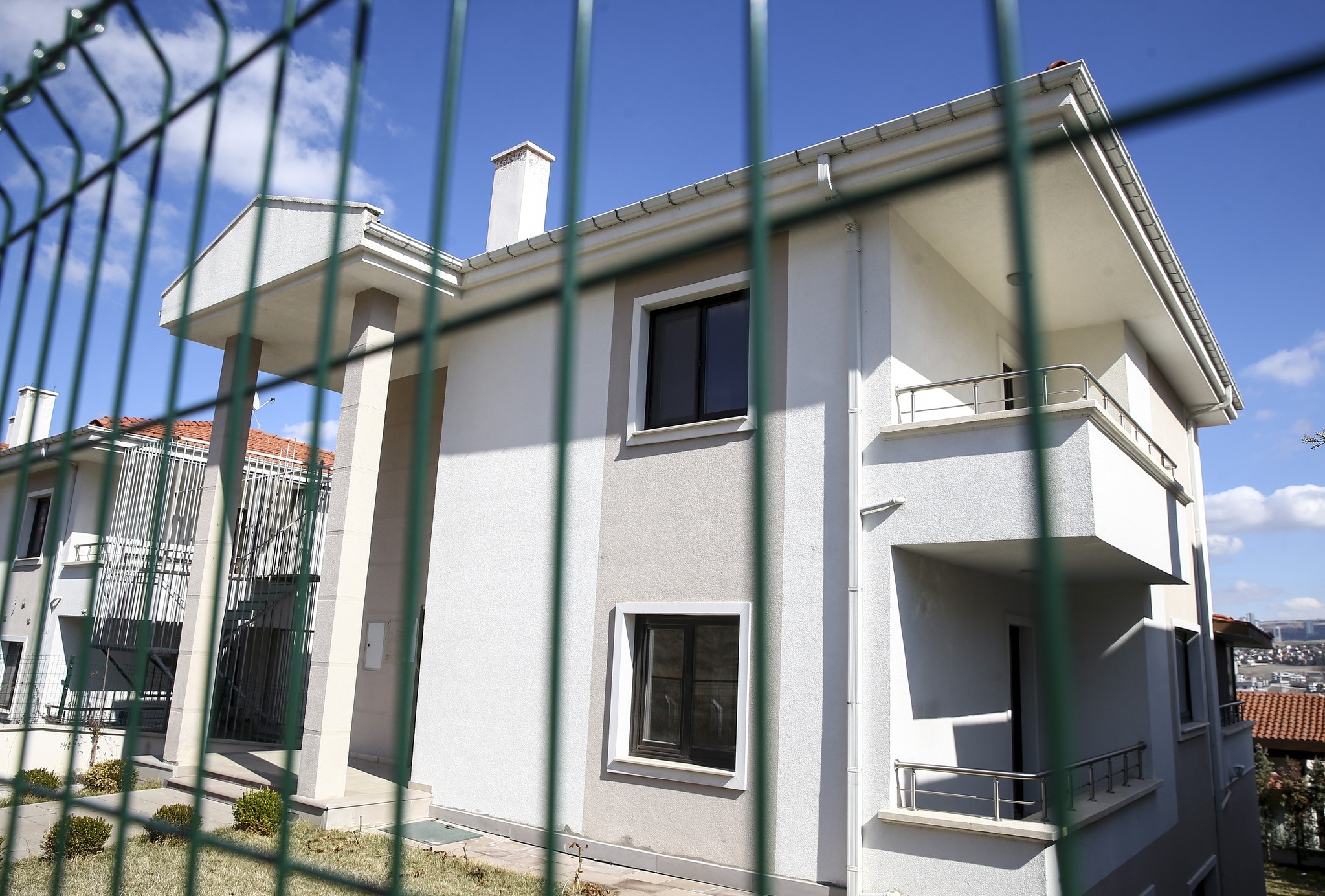 FETÖ started devising plans to seize power with the aid of its infiltrators in the military in 2015, the prosecutors investigating the July 15 coup bid have said, adding that the first coup talks were held in a villa in the capital Ankara

Only eight days after the ruling Justice and Development Party (AK Party) emerged victorious from the 2015 elections, the Gülenist Terror Group (FETÖ) decided to commence with their plans to overthrow the government. For this purpose, they rented a triple-story villa in the capital city of Ankara in November 2015 and it was there where senior figures of the terror cult hosted FETÖ infiltrators in the army, prosecutors investigating the coup attempt detailed in an indictment. The indictment of prosecutors in Ankara shows how desperate the terror cult was to topple the government which was determined to continue anti-terror efforts and pursue a new crackdown on the group that was first designated a "national threat" in 2014.

FETÖ has repeatedly targeted to overthrow AK Party governments since 2013, but the July 15 attempt was the first time it deployed its military infiltrators to topple the government and assassinate President Recep Tayyip Erdoğan.According to the indictment, senior figures of FETÖ first met generals and lower-ranking officers in the Ankara villa on Nov. 9. The triple-story building fronted by a "consultancy services firm" was where the masterminds of the coup plot regularly held meetings up until the coup bid. Fingerprints discovered in the villa by forensic investigators confirmed that the generals were indeed frequent visitors to the place.

The villa was located thanks to accounts of secret witnesses testifying to investigators as part of inquiries into the coup attempt. A secret witness, who later came out as one of the officers who joined the coup has told the court that he visited the villa some 10 days before the coup bid and met both civilian figures of FETÖ and fellow military infiltrators there. The witness named military colonels Bilal Akyüz, Barış Avıalan, generals Mehmet Partigöç, Ömer Faruk Harmancık and Gökhan Şahin Sönmezateş as other FETÖ-linked soldiers who attended the pro-coup meetings.

Gen. Partigöç, a high-ranking officer at the army headquarters, who was also a member of Peace At Home Council, is accused of being part of the team that held the Chief of the General Staff Gen. Hulusi Akar hostage at the time of the coup.

Sönmezateş, who is currently jailed along with Partigöç, is accused of leading and instructing two military teams sent to assassinate President Erdoğan.

Adil Öksüz, one of the most wanted figures of the coup, organized the meetings, according to the indictment. Öksüz, a theology lecturer by profession, was actually a key point man of FETÖ who planned the coup attempt upon instructions from Fetullah Gülen. It is alleged that Gülen himself approved Öksüz's plans a few days before the putsch bid took place.

Öksüz was captured at the Akıncı military base in Ankara, where pro-coup troops commanded the putsch efforts, but he was released in a controversial verdict by a local court that has now been found to have FETÖ-linked judges and prosecutors. He remains at large since then and is believed to have fled abroad.A secret witness, code named Şapka, says he first met a Gülenist code named Cihan. According to Şapka, Cihan had brought him and another individual to an office and told them that they were about to join a very important discussion. After a waiting for a while, Staff Col. Turgay Sökmen, who was code named Abdullah, met with them both, according to Şapka's testimony.

Following this, they got into a grey car with an Ankara license plate and went to the three-story villa. Inside, there were reportedly eight to 10 civilians in addition to the generals and colonels."One of the first things to do on July 15 is to get our imprisoned community members out of prison without losing any time," Öksüz told the group, according to Şapka's testimony.

The discussions at the villa included assignments for the night of July 15, Şapka said. He also stated that the coup was actually set to start on July 16 at 3 a.m. but was moved ahead with a sudden WhatsApp message that said, "Start the operation," at 8 p.m. the night before. He stressed that after the message, further orders were sent through a newly formed WhatsApp group called the "Peace at Home Council."Another witness code named Kuzgun explained to prosecutors that he saw Gen. Harmancık at the villa and that Harmancık told him they were working on a coup plan and that it was almost finished. Harmancık also told him that the planned date for the coup was going to be either July 15 or a week later, July 22.Kuzgun added that Öksüz suggested he would take the coup plan to the U.S. to confirm it with Gülen.

According to Kuzgun, the discussion included plans to take total control across Turkey, arrest the president and prime minister, detain the chief of General Staff as well as the force commanders - if they could not be persuaded to support the coup - and fill these posts with FETÖ members.

In a related development, members of the self-styled 'Peace At Home Council' of the FETÖ-linked military junta will start testifying in a series of hearings this week.

Generals and colonels from the 38-member council, whose name was first heard when coup plotters forced a TV presenter to say its name on public broadcaster TRT, will be tried in the capital. The Ankara trial originally focused on incidents at a military base and military school where these generals and colonels were deployed. The defendants are among the 330 people in the trial who are charged with attempting to overthrow the government and membership in a terrorist group, referring to FETÖ.During the weeklong trial at a massive complex where both a prison housing coup plotters and a courthouse are located, Major General Osman Ünlü, Brigadier General Murat Aygün and Colonel Bilal Akyüz will testify. Army chief Hulusi Akar and Gen. Yaşar Güler, who heads the gendarmerie branch of the Turkish Armed Forces (TSK), are among the plaintiffs in the case. Akar and Güler were kidnapped by pro-coup troops and held hostage for hours before the coup attempt was quelled thanks to strong resistance by civilians, police and anti-coup soldiers.

Ünlü was the commander of a military school that trains officers for artillery and missile units. Aygün was the commander of an artillery brigade, and Akyüz was a staff colonel for the Land Forces before they were implicated in the coup attempt and arrested. The officers, who were dismissed from the army following their arrest, are accused of a string of coup-related crimes, including attempting to take over the country's telecom directorate and headquarters of the state-run satellite operator as well as blocking the main roads in the capital, along with raiding a mosque where an anti-coup call was played through loudspeakers. Lower-ranking officers who testified in the previous hearings defended their actions as "following orders" and claimed they were told by their superiors that they were tasked with "stopping a major terror attack." Aygün is singled out among the defendants for ordering troops out of the military base onto the streets of Ankara under the pretext of an anti-terror operation. All of the defendants face multiple life terms as well as lesser prison terms for the coup attempt, murder and membership in a terrorist group.

ÖZTÜRK, GÜLEN WERE BEHIND THE COUP

The main indictment in the coup attempt, which was recently wrapped up, names 38 people as members of the Peace At Home Council. Akın Öztürk, the former commander of the TSK and a powerful military figure, is the alleged head of the council while Fetullah Gülen, the head of FETÖ who currently resides in the U.S. in Pennsylvania, is accused of masterminding the coup attempt with the aid of FETÖ's infiltrators in the army. Gülen remains in the U.S. where he settled in 1999. Members of the coup council and Gülen face a record 2,988 possible life sentences for the putsch bid.The indictment also offers clear insight into the team behind the coup attempt as questions still linger about the coup night despite a flurry of media reports that, more or less, portrayed the putsch as the work of a group of disgruntled officers who joined a FETÖ-linked junta to topple the government. It also says the starting hour for the coup was earlier than the coup plotters planned as the putschists, in panic, thought their plot was uncovered by the intelligence branch.

Along with Öztürk, the so-called Peace at Home Council consisted of generals Ahmet Bican Kırker, Ali Kalyoncu, Ali Osman Gürcan, Erhan Caha, Mehmet Partigöç, İlhan Talu, Mehmet Dişli, Gökhan Şahin Sönmezateş, Semih Terzi and colonels and lieutenant colonels. Former Colonel Ali Yazıcı, who was the military aide to President Recep Tayyip Erdoğan, is among the 38 members of the council, and most in the council were officers working for Land Forces and the Office of the Chief of General Staff. The rest were commanders at strategic military bases who personally oversaw efforts to seize power in Ankara, Istanbul and other cities. Several suspects named in the indictment remain at large, while General Semih Terzi, a member of the council, was killed as he tried to seize a military base in Ankara during the coup attempt.

FETÖ began to wage a campaign against the government a few years ago. Thanks to the terror group's infiltrators in the police, judiciary, bureaucracy and the military, FETÖ orchestrated sham trials to implicate senior figures on forged evidence and ultimately moved to seize power by employing officers loyal to them in the coup attempt.

In the aftermath of the coup attempt, FETÖ now faces a new wave of trials. A total of 1,235 lawsuits have been filed against the terror group since the attempted putsch. Of those, 78 of the lawsuits are directly related to the coup.

The coup trials alone have 1,986 defendants, with 1,232 currently being held in custody in 21 provinces. The first trials started last year in two provinces, Denizli and Erzurum, and more have followed in Istanbul and Ankara. With 101 trials, the legal process regarding the coup attempt is expected to take at least months if not years.
RELATED TOPICS