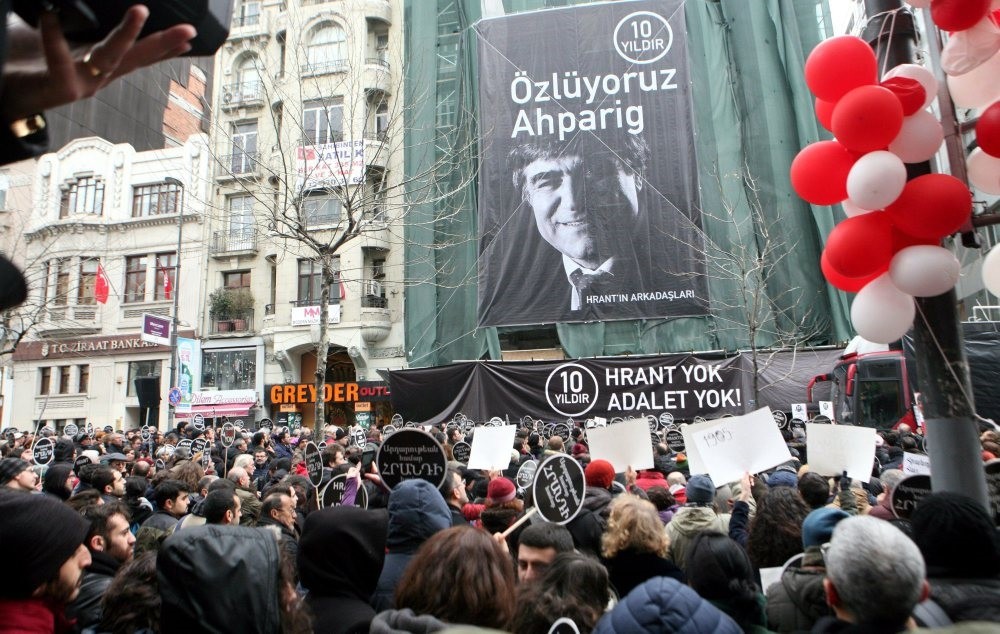 In a breakthrough in the decade-old case of the murder of Turkish-Armenian journalist Hrant Dink, a court accepted the arrest warrants for Fetullah Gülen, leader of FETÖ, and other figures linked to the group, for inciting the murder

A court Wednesday approved arrest warrants for Gülenist Terror Group (FETÖ) leader Fetullah Gülen and a number of suspects linked to the group in connection with the 2007 murder of prominent Turkish Armenian journalist Hrant Dink.

It is the first time Gülen and his group, which is also accused of being behind last summer's foiled coup bid, has been implicated in the case.

A letter of request for arrest warrants sent to the court by prosecutor Gökalp Kökçü says the murder was "a beginning act" for FETÖ to overthrow the constitutional order and seize power. It says a number of public officials serving FETÖ plotted the murder and paved the way for Ogün Samast, a seemingly ultra-nationalist teenager, to assassinate Dink. The prosecutor said the infiltrators of FETÖ in law enforcement set up an illegal structure within police intelligence units and dismissed anyone not loyal to the terrorist group in order to broaden their clout.

The letter continues by saying the shuffle and dismissals within law enforcement after the murder on the allegations that officers neglected their duties to prevent the murder and helped FETÖ to gain more influence in order to execute their plans. "The infiltration helped a number of (sham) trials and ultimately, paved the way for the July 15 coup attempt," the prosecutor said, referring to several cases based on forged evidence that has seen the imprisonment of prominent figures from the army, media, and academia, among others. FETÖ has long been accused of replacing the people fired from their public posts due to trials, with people loyal to the terrorist group.

Samast, then 17, fled the scene but was captured at a bus station in Samsun, a city near his hometown of Trabzon. The murder was championed by ultra-nationalists at the time, and Samast and other suspects accused of masterminding the assassination were sentenced to various prison terms.

A separate investigation into the murder is covering the allegations of a cover-up by public officials and police chiefs. Police chiefs linked to FETÖ are accused of hiding critical information regarding Samast and his accomplices prior to the murder and they remain jailed with pending trials regarding the cover-up claims.

Dink, 53, was an outspoken journalist advocating for the reconciliation of Turks and Armenians. Relations between the two groups remain strained over the ongoing "genocide" dispute.

Kökçü told the court in his letter that the murder and its aftermath -including the publication of photos of Samast holding a Turkish flag while posing for photos with security personnel - sought to "create a perception that nationalists were behind the murder," and helped drumming up support for sham trials, especially the notorious Ergenekon case. Ergenekon was the name of a covert gang controlling the state according to judges, prosecutors and police chiefs who played a role in shaping the case. Ergenekon was blamed for a string of crimes and hundreds of prominent figures from generals to journalists were imprisoned. Years later, it was revealed that Ergenekon was actually an imaginary gang conceived by FETÖ infiltrators in law enforcement and judiciary. All defendants who claimed they were imprisoned on forged evidence and trumped-up charges were acquitted.

Along with Gülen, who currently resides in Pennsylvania in the United States, an arrest warrants is sought for Zekeriya Öz, a fugitive FETÖ-linked prosecutor who was behind Ergenekon and other cases believed to be the creation of FETÖ.
RELATED TOPICS