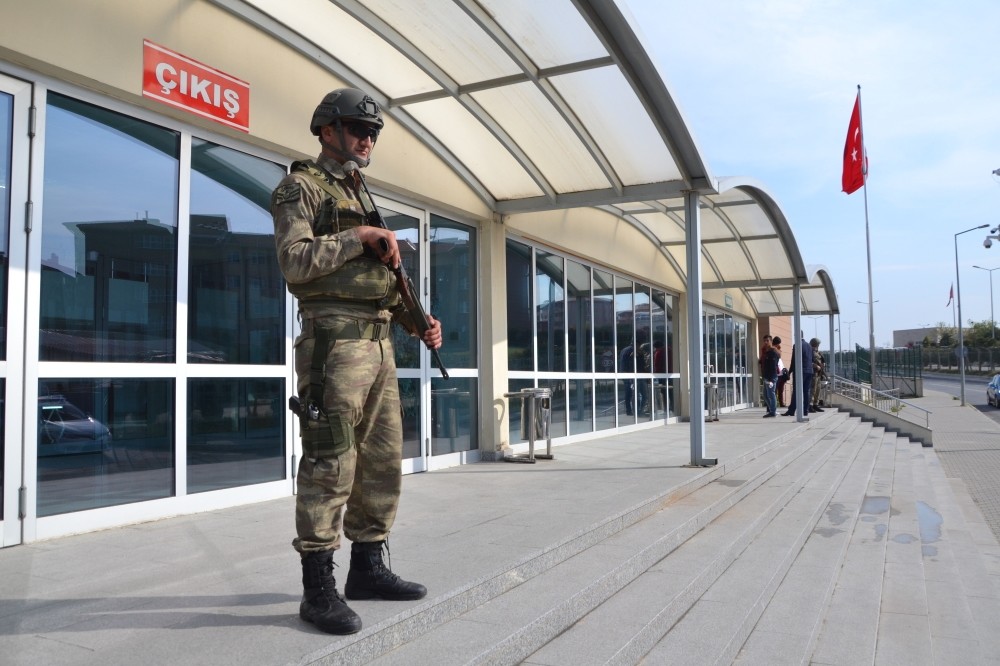 A soldier stands guard outside the courthouse in Silivri, Istanbul where pro-coup troops stand trial for attempting to seize public broadcaster TRT.
by daily sabah Apr 18, 2017 12:00 am

A new week of trials against defendants involved in the July 15 coup attempt blamed on FETÖ started yesterday. The first hearings are being held in a bid to seize a public broadcaster and a satellite TV provider, as well as the headquarters of the navy

A new set of trials against individuals suspected to have been involved in last year's July 15 coup attempt began yesterday against the backdrop of the conclusion of a historic referendum. As its supporters cheered the results of a referendum on constitutional changes, dozens of coup suspects will appear before the courts in Ankara and Istanbul that will decide their fate. Three new trials, including a trial on the attempt by putschists to seize public broadcaster TRT and private satellite provider Digitürk, opened in Istanbul, while putschists charged with attempting to occupy the navy's headquarters took to the dock in Ankara.

The coup attempt blamed on the Gülenist Terror Group (FETÖ) accelerated efforts to hold the referendum, which will hopefully streamline bureaucracy and help crack down on infiltrators from the terrorist group within the state.

A wake-up call for those clinging to democracy in the face of an unprecedented terrorist group with infiltrators everywhere, the coup attempt has become a turning point in the country's history as, for the first time, the public actively resisted a putsch bid by taking to the streets to confront putschists.

TRT, the Turkish Radio and Television Corporation, was one such place where crowds amassed upon hearing putschists were trying to seize it. Pro-coup troops were apparently winning for a brief time when they managed to have a TV presenter they held at gunpoint recite the declaration that a coup was being held by the putschists' Peace At Home Council. A crowd of unarmed civilians stormed the TRT headquarters in Istanbul with the assistance of police and forced putschists to flee or surrender.

Ninety-four suspects accused of storming the TRT compound in Istanbul as well as attempting to seize Digitürk, a major satellite provider, went on trial in the city's 24th High Criminal Court, located in a campus in the Silivri district which also hosts the massive prison complex where putschists are being held. Fifty-six suspects are jailed while 10 others were released pending trial after their initial detention. The rest of the suspects are at large. Most suspects are military officers of various rank, while five defendants are "civilians" who helped pro-coup troops gain control of TRT or cut off its broadcast. The detained men had jumped the fence outside TRT's Istanbul headquarters minutes before anti-coup security personnel and a crowd of anti-coup civilians retook the building from pro-coup forces, as CCTV footage would later reveal. Initially thought to be civilians fleeing for their lives amidst the brutal attempt to take over TRT, interrogators were surprised when they discovered the detainees' real identities. Harun Şahin was the former manager of Sürat Teknoloji, a technology company that was shut down for its links to FETÖ, and Niyazi Akalın was an engineer working at the same company. Seyfullah Genç was an engineer for Supercom, another technology company with direct links to the terror cult. Security forces also arrested two other men in plainclothes, and yet again, they turned out to be engineers working for a FETÖ-linked company outside Digitürk. All five men would later confess that they were brought in by pro-coup troops to cut off broadcasts at TRT and Digitürk.

Further footage captured on security cameras showed the men exiting a helicopter after landing inside a football stadium in Istanbul. Following this, the men, in the company of heavily armed soldiers, had hijacked a bus and forced its driver at gunpoint to take them to the buildings of TRT and Digitürk.

Prosecutors are asking for three sentences of life imprisonment for suspects over the coup charges. They also request lesser prison terms on charges of membership of a terrorist group, damage to property and attempted homicide.

In another courtroom inside the Silivri complex, 90 suspects including 12 arrested after the coup attempt attended the fifth hearing related to their alleged involvement in the bid to seize the Istanbul Governorate. Prosecutors are requesting life imprisonment for defendants that include a colonel, a lieutenant colonel and lower-ranking officers.

In the capital of Ankara, 72 defendants stand accused of attempting to seize the headquarters of the Turkish Naval Forces appeared before a court inside Sincan prison complex, home to hundreds of FETÖ-linked suspects including putschist officers. Mustafa Mesut, a specialist sergeant, was the first to testify at the hearing and claimed he did not join the putsch bid. Mesut told the judges he was ordered by his superiors to bring more men to headquarters "as a precaution against a possible terror attack." He said he did not carry any gun while he was inside the headquarters and never left his post inside Operations Center at the headquarters. "I was only an officer on duty," he claimed as he defended himself. Mesut claimed he had no links to FETÖ.

Prosecutors who drafted the indictment say Arabacı also had staff on several navy vessels under his command.

After a strong resistance the general public managed to stave off the putsch attempt. Trials in relation to the putsch started last year and are expected to continue throughout 2017.