Thousands of FETÖ moles in Turkish police forces rooted out 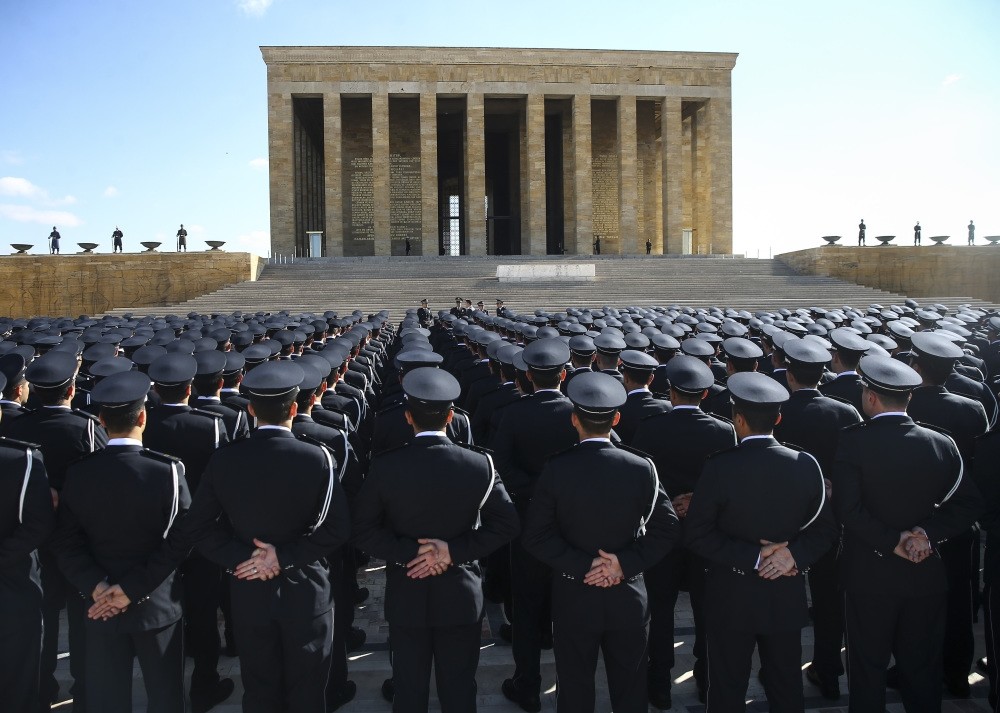 Officers attend a ceremony to mark the anniversary of the foundation of the police directorate. FETu00d6 is accused of having a large number of infiltrators in law enforcement.
by daily sabah
Apr 28, 2017 12:00 am

Authorities suspended 9,103 police officers from duty in a bid to weed out suspects linked to FETÖ, the group blamed for the July 15 coup attempt. Suspended officers include guards of the president who escaped as an assassination attempt took place during the foiled putsch

Turkey's fight against the Gülenist Terror Group (FETÖ) has reached a new milestone over the past two days. After clamping down on the group's commanding police officers, authorities dismissed 9,103 policemen from duty for their links to the terrorist group being blamed for the July 15 coup attempt. Officers guarding the president's family, Parliament and those serving in the witness protection department are among those suspended for their links to FETÖ. President Recep Tayyip Erdoğan narrowly escaped an assassination attempt during the putsch bid. The mass dismissals and detentions are major steps for Ankara seeking to end the clout of the terrorist group that faces multiple trials and arrest warrants for its vicious campaign to seize power.

The suspensions were announced late Wednesday as part of a state of emergency declared after the coup attempt that left 248 people dead. Though police, along with anti-coup soldiers played a key role in quelling the coup with the assistance of an unprecedented public resistance, the country's law enforcement is viewed as one of the institutions FETÖ is able to infiltrate the most. Led by U.S.-based Fetullah Gülen, a former preacher, the terrorist group managed to infiltrate the law enforcement, judiciary, bureaucracy and military throughout the past four decades before it openly threatened the government with two coup attempts in 2013.

Following their latest coup attempt in July 2016, Turkey undertook strict measures against the group and launched reshuffle in law enforcement, the army and bureaucracy.

Several military schools viewed as recruitment grounds for the group were shut down while thousands of military officers were dismissed from the army for their links to FETÖ.

The police force has also undergone a major reshuffle as a large number of officers and police chiefs were suspended, detained or arrested on terror charges, though Wednesday's move is probably the biggest of its kind.

Suspended officers will likely be subject to trials. Though many linked to FETÖ deny affiliation with the group, authorities say key evidence, such as an encrypted messaging app exclusively used by the terrorist group, the suspects' ties to prominent figures of FETÖ and their donations to the group implicate them in membership of the group.

Dismissals follow Wednesday's nationwide operations on more than 1,100 suspects who are accused of acting as "point men" for the terrorist group who directed followers in the law enforcement. The operations, which are the biggest of its kind against FETÖ, are the result of an investigation expanded thanks to discovery of new evidence.

Media outlets reported that tens of thousands of names linked to the group were found in a digital database belonging to an unidentified senior member of FETÖ, who was the "chief imam" for infiltrators in the police.

The so-called "imams" are the group's influential figures who are assigned to command an entire army of followers in any given institution FETÖ had infiltrated into. Dismissals are also linked to that digital database uncovered by investigators, who stepped up efforts against the terrorist group after the foiled putsch bid.

Among those suspended are police chiefs and lower-ranking officers in almost all 81 provinces. The places of interest in the suspensions are the suspects in a police unit tasked with protecting the president and his family, other units guarding the prime ministry and the Parliament, as well as a unit tasked with witness protection. "Secret" FETÖ members in other critical departments such as police intelligence, the anti-terrorism department and elite Special Operations department are also among those who have been suspended.

Media reports based on statements by security sources say FETÖ reorganized its men, who were overseeing police in the aftermath of the coup attempt, when a majority of them were detained or arrested and appointed new members to command its police infiltrators.

Recent investigations have revealed that the cult had assigned unlikely members to lead a large group of infiltrators in the police force, namely, people in ordinary positions that would not attract attention such as primary school teachers and even shopkeepers.

Criminal inquiries have revealed that thanks to FETÖ's widespread influence in the positions of law enforcement, the terror group had managed to carry out raids against its critics, imprisoning them on false charges and fabricated evidence, even wiretapping thousands of people.

These so-called "imams" are also accused of collecting "donations" for the terrorist group and supplying confidential documents related to police work to senior members of the terrorist group. Media reports say the number of "imams," who infiltrated the force, also decreased after two coup attempts in 2013 and they had become "sleeper cells" after the July 15 coup attempt.

After the putsch bid was foiled, thousands of people from the public sector, the Turkish Armed Forces (TSK) and the police were dismissed from duty and some were arrested for having links to the terrorist group.

Speaking about Wednesday's detentions, Interior Minister Süleyman Soylu said that the suspects "built some sort of alternative police force" within the Turkish National Police and defined the counterterror operations as "the most important step against FETÖ [and its infiltration in the police force]."

The operations come after televised statements by Prime Minister Binali Yıldırım 10 days ago regarding the government's efforts against FETÖ. Yıldırım named the group as "a complicated structure with still-unresolved relations," adding that authorities have recently made "an important discovery" about the group that would "make significant contribution to the fight against FETÖ."

The terrorist group, led by a fugitive former preacher Fetullah Gülen, openly started a campaign to seize power in Turkey in 2013 when police chiefs and prosecutors linked to the group carried out two attempts to topple the government by implicating ministers in investigations based on forged evidence.

When Ankara moved to contain the Gülenist threat, the terrorist group activated its infiltrators in the Turkish military and tried to topple the government once again last summer in a foiled putsch. Turkey is seeking Gülen's extradition from the U.S., where he has lived in self-imposed exile since 1999. The terrorist leader faces life imprisonment in multiple cases related to the coup attempt and other charges.