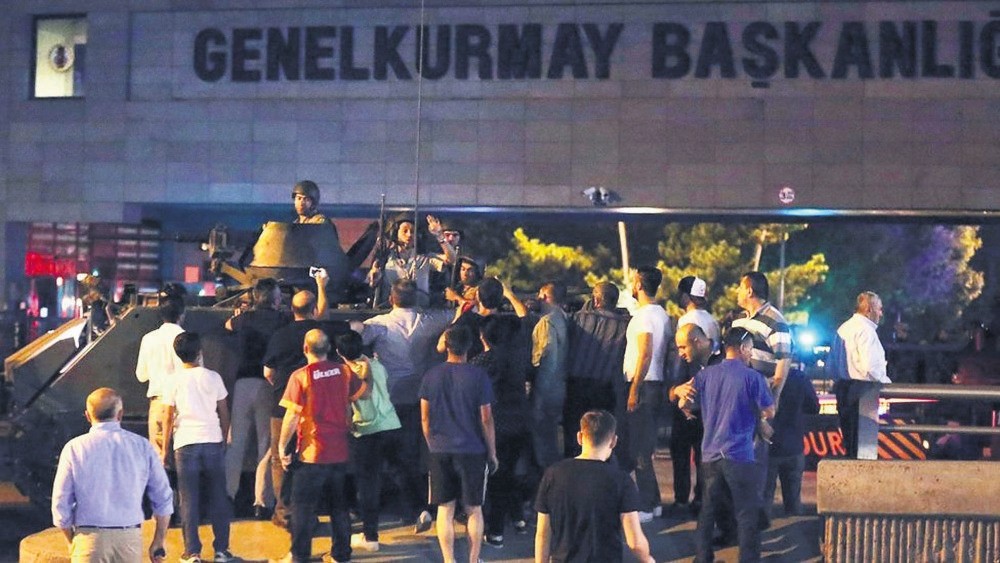 People opposing the putsch confront pro-coup troops outside the headquarters of the Chief of General Staff in the capital Ankara. Several people were killed inside and outside the building when putschists opened fire.
by Daily Sabah May 03, 2017 12:00 am

A colonel and a captain, captured at the Turkish military headquarters in Ankara during FETÖ's coup attempt last year while aiding pro-coup troops, claimed yesterday that they were not involved in the putsch bid, adding that it was a mere coincidence them being there at the time

A new week of trials started yesterday on the July 15 coup attempt blamed on the Gülenist Terror Group (FETÖ)..

A total of 164 defendants, who joined the coup attempt from the Land Forces Warfare Academy of the army in the capital Ankara, appeared before a court inside a sprawling prison complex in the capital's Sincan district.

The two officers, who were caught aiding pro-coup troops invading the headquarters of the chief of Joint Staff, denied their role in the putsch bid even though they were caught red-handed after the coup was quelled.

Col. Erdoğan Kurt, who traveled to the capital before the coup even though he was stationed in the eastern city of Siirt, claimed he did not know he was "taken to" to the army headquarters. The colonel added that he was not involved in the putsch bid while he was there.

The colonel, who once worked at the military school, said he decided to go to the school when he heard about the coup attempt while he was in Ankara "to treat" his "sick mother."

He said he donned his uniform "to avoid confusion" and claimed a colonel at the school advised him to board a helicopter to go to "a safe place."

"I boarded the helicopter with other soldiers and I thought it was taking us to a safer location. It landed at the army headquarters and I did not know why we were taken there. I stayed there (until the morning of July 16) and did not take part in the coup," he said in defense of himself.

He is accused of commanding some 150 troops in a raid against the headquarters. Other pro-coup troops invading the place had taken Army Chief Gen. Hulusi Akar hostage and had kept him in a military base in Ankara before the failure of the putsch thanks to a strong public resistance, anti-coup police and soldiers.

Kurt is among the active members of FETÖ according to investigators who discovered evidence linking him to the terrorist group on his personal computer.

Documents found on his computer show Kurt "blacklisted" military personnel not linked to the group while he was working at the military school and indicated that he resorted to disciplinary action based on false charges against cadets not loyal to FETÖ to expel them from the school.

Volkan Kençi, a captain who traveled to the army headquarters from the Land Forces school on July 15 to join the coup bid there, also claimed he was not involved in the putsch attempt.

Kençi said he was on duty at the school when a lieutenant colonel ordered him to board a helicopter and claimed he thought he was dispatched to the army headquarters to "protect it against the coup."

All defendants in the case face life imprisonment for joining the coup and lesser prison terms for membership to a terrorist group, FETÖ.

Through its followers in the army, the group sought to seize power and kill President Recep Tayyip Erdoğan.

Gülen is the prime suspect in all the coup trials and faces multiple life sentences. The terrorist group's leader denies links to the putsch, while Turkey has been seeking his extradition from the United States.

A recently unveiled indictment shows Gülen's aides orchestrated the coup attempt with the terrorist group's infiltrators in the army, from generals to aides to the army chief, and received Gülen's approval a few days before the putsch bid was actualized.

An indictment related to the Akıncı military base, which served as a command center for the putschists, says Gülen would return to Turkey from his self-imposed exile from the United States and settle at the base if the coup plotters succeeded.

It names Adil Öksüz, a theology lecturer by profession who served as Gülen's point man for the infiltrators in the army, as the senior figure behind the putsch bid.

Akın Öztürk, a former commander of the Turkish Air Forces and a member of the powerful Supreme Military Council, is accused of leading the pro-coup troops.

Since last December, numerous trials on the coup attempt have been underway with hundreds standing accused, from civilians helping pro-coup troops to generals who ordered troops to open fire on unarmed crowds that were confronting the putschists.
Last Update: May 03, 2017 10:09 am
RELATED TOPICS