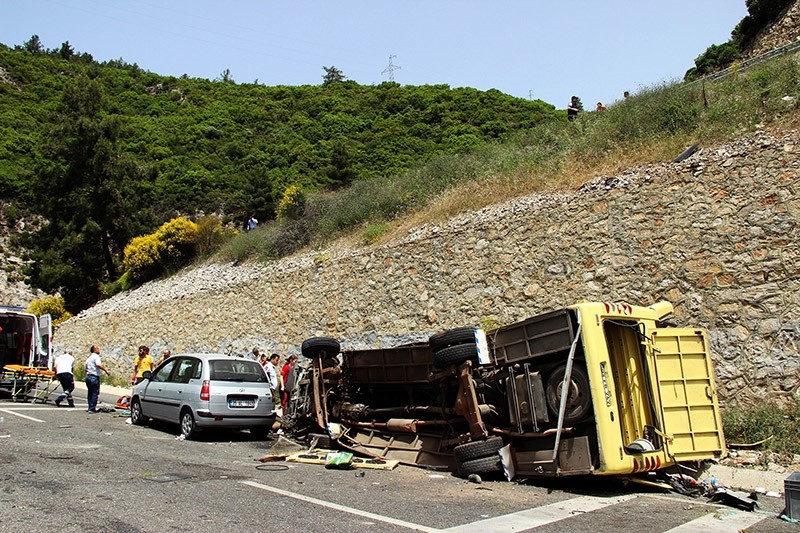 The owner of a minibus involved in a crash that left 24 people dead and 10 critically injured in the Turkish province of Muğla has been arrested, according to security sources.

The crash took place Saturday, when a minibus carrying Turkish tourists tumbled 15 meters down a cliff on the Muğla – Antalya highway in southwest Turkey.

The minibus owner, identified as Bülent Ç., was taken into police custody May 13 and charged with "negligent homicide causing more than one death."

Chief Public Prosecutor Necip Topuz also suggested break failure as a cause for the crash, "I watched the accident video, the minibus overtakes the vehicle while driving quickly, and the most noticeable thing is that the brake light does not come on," he said, adding that a detailed expert examination would be conducted on the minibus.

"We are deepening the investigation into the death of 24 people as well as the injuries of 10 others. While the capacity on the minibus should have been 30 people according to the law, the sum of the dead and wounded exceeds this figure," Topuz added.

The minibus was carrying a group of passengers, mostly women and children, for a weekend trip organized in honor of Mothers' Day from Izmir to the resort town of Marmaris.

President Recep Tayyip Erdoğan released a statement on the accident, in which he passed his condolences to the relatives of those killed, while wishing a speedy recovery to those injured.

"The cause of the accident will be found out after thorough examinations," Yıldırım told reporters following the funerals, adding that despite improved infrastructure in the last 10 to 15 years, "a machine that could prevent human mistake couldn't be invented yet."