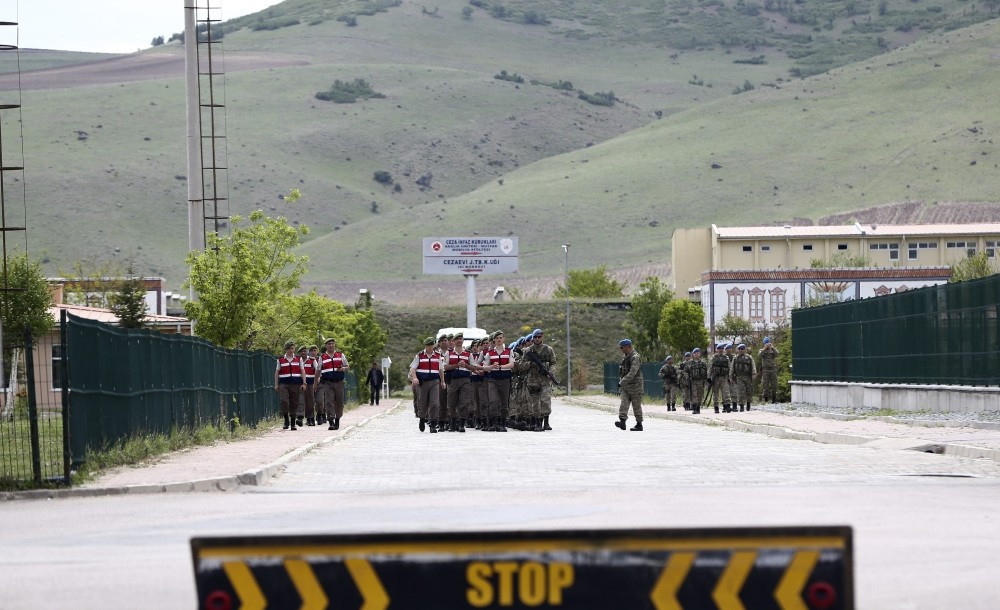 Officers inspect gendarmerie commandos at the complex housing a courtroom and prison where coup suspects are being held ahead of today's trial.
by Daily Sabah May 22, 2017 12:00 am

A trial on the attempted takeover of the military's main headquarters during last year's coup attempt starts today in the capital Ankara, in a tightly-guarded complex of a prison and courtrooms. It is the first time that 221 suspects, including leaders of the junta linked to the Gülenist Terror Group (FETÖ) will be on the dock after their arrest in the aftermath of the putsch bid. The defendants are accused of invading the office of Chief of General Staff Gen. Hulusi Akar and other top military brass.

A high criminal court will preside over the trial, which is expected to continue until July 16. Hearings will be held in a courtroom inside a sprawling prison complex in Ankara's Sincan suburb. The complex is also where most coup plotters are being held since the coup bid was quelled.

The list of defendants is a who's who of alleged masterminds of the coup bid and those who helped its partial success. Among them are members of so-called 38-member "Peace At Home Council," which declared the coup on public broadcaster TRT after it was taken over by putschists. Defendants also include Ali Yazıcı, the then-top military aide to President Recep Tayyip Erdoğan who escaped an assassination bid during the putsch attempt, a former aide to Hulusi Akar and a staff member of Prime Minister Binali Yıldırım's office.

The main suspect in the case is Fetullah Gülen, the head of FETÖ. Gülen, a former preacher who turned his religious movement into a secretive terrorist group, currently resides in Pennsylvania, United States. Ankara is seeking his extradition from the United States and if he is deported, he will likely be sentenced to multiple life sentences. Nine defendants were released pending trial while 12, including Gülen are at large. Apart from soldiers that range from generals to captains, 12 civilian defendants including civil servants, teachers and businesspeople are being tried in the case.

An indictment by three prosecutors from the Ankara Chief Public Prosecutor's office says FETÖ members planned to overthrow the constitutional order "in order to replace it with an order of their own design." "Heinous members of FETÖ infiltrated into Turkish Armed Forces mobilized more than 8,000 (pro-coup) troops, employed 35 warplanes, 37 helicopters, 74 tanks, 246 armored vehicles to bomb and take over democratic institutions, from presidential palace to parliament," the indictment reads.

President Erdoğan, Hulusi Akar, other anti-coup commanders are the plaintiffs in the trial. Erdoğan was vacationing in the southwestern resort town of Marmaris when the coup unfolded. The president was flown to safety shortly before teams of assassins composed of putschist troops stormed the hotel, killing police officers guarding the place in the process. Erdoğan traveled to Istanbul while he called upon the public to take to the streets to confront the putschists on live TV. An unprecedented public resistance resulting in the large number of deaths frustrated pro-coup troops who were forced to surrender when anti-coup soldiers and police officers surrounded them.

Today will also mark the first time when the alleged leaders of the coup will face families of coup victims. Akın Öztürk who is accused of commanding the pro-coup troops all across Turkey and other defendants will be "paraded" before the families who will watch the trial before the start of first hearing.

Strict security measures will be in place inside and outside the courtroom. 1,200 commandos have been deployed in the area for security, including 120 snipers who will be stationed on rooftops overseeing the complex. Anti-aircraft guns have also been placed at the venue whose outside perimeter will be monitored by small drones.

The first trials into the putsch bid had started late last year but few were concluded and most trials have dozens, if not hundreds of defendants, making it a lengthy legal process. Judiciary authorities set up teams of investigators solely tasked with the cases to speed up the trials that may take years otherwise, while in some places, courtrooms have been replaced with larger venues to accommodate the defendants. For instance, dozens of defendants, in a case regarding the assassination attempt against the president during the putsch bid, are being held in the conference hall of a local trade chamber.

Journalists will not be allowed to take photos or shoot videos inside the courtroom, but for the first time in coup trials, they will be allowed to take photos and videos of all defendants as they enter the courtroom. Officials made an exception for the families of the victims to see the defendants as they are escorted into the courthouse. Out of the 221 people involved in the putsch attempt, 38 defendants face multiple life sentences in the trials.