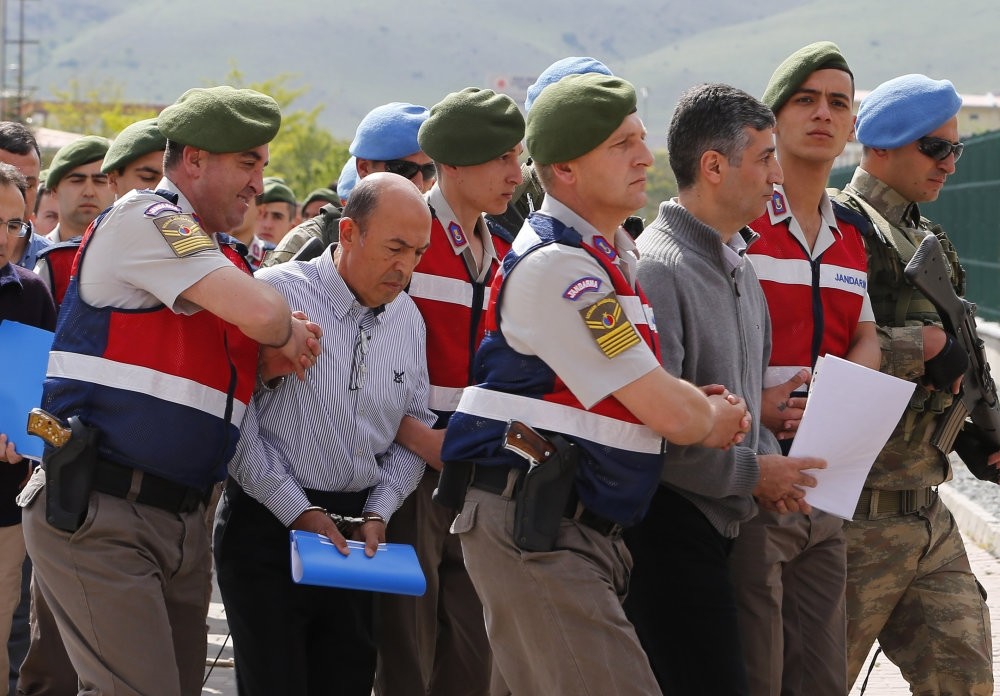 Coup suspects being escorted to the courtroom by gendarmerie troops.
by Daily Sabah May 23, 2017 12:00 am

The second hearing in a crucial trial for the July 15 coup bid blamed on FETÖ, was underway in Ankara Tuesday. Defendants, including the president's former military aide, claimed they were not involved in the coup despite clear evidence

A new hearing in a trial on the takeover of army headquarters during the Gülenist Terror Group's (FETÖ) July 15 coup attempt last year was held in the capital Ankara Tuesday. The trial is significant as all the alleged leaders of the putsch bid, including former generals, are in the dock. It started with defendants denying involvement with the coup. The president's former military aide testified, and like Akın Öztürk, the former air force commander who testified on Monday, he claimed he was not involved in the coup attempt, with evidence mounted against him.

Ali Yazıcı said he heard about a planned coup one month before the putsch bid that killed 250 people but was quiet on where or from whom he heard it. Meanwhile, another defendant testifying Tuesday denied he was linked to FETÖ despite admitting it in his first interrogation by police after his arrest months ago.

Yazıcı, a colonel who served as an aide to President Recep Tayyip Erdoğan up until the coup attempt, said Erdoğan would not have "chosen him" for the post if he had any links to FETÖ or the coup. Yazıcı, who is also accused of helping pro-coup troops trying to kill the president, also disputed this and said if he wanted to assassinate Erdoğan, he had opportunity and capacity before the coup. He is accused in a separate case of attempting to locate Erdoğan as the latter was on vacation in southwestern Turkey and Yazıcı was in the capital Ankara.

Prosecutors say Yazıcı made an "inexplicable trip" to a military base in the city of İzmir where pro-coup troops gathered before flying to the resort town of Marmaris to kill Erdoğan, and repeatedly sought to learn the location of the president from Erdoğan's entourage. Yazıcı has failed to explain why he drove to İzmir from Ankara in the company of a military officer. He also resorted to selective amnesia when the lawyers for the plaintiffs asked him about his phone calls, apparently to learn the whereabouts of the president, and said he did not know the phone numbers or persons he called, despite phone records tracing the calls.

Answering the judges' questions at the hearing, Yazıcı claimed he was not aware he was a member of the "Peace At Home Council" of the FETÖ-linked junta behind the coup attempt. He said he did not have a clue who was behind the coup and claimed he did not know anyone in the army linked to the terrorist group. FETÖ, led by the U.S.-based Fetullah Gülen, is accused of masterminding the coup plot executed by its infiltrators in the Turkish Armed Forces (TSK). He also denied he talked about an upcoming coup to journalists while he was traveling aboard the presidential plane with them and the president. "But there were people who said that a coup would happen some two months before the putsch bid," he said, without explaining who. He also failed to explain why he did not inform the authorities about talk of the coup.

Another defendant, Levent Türkkan, the former aide to Chief of General Staff Hulusi Akar, told the court yesterday that he never accused Ali Yazıcı of being a FETÖ member although it was he who named the FETÖ-linked soldiers to interrogators after his arrest following the coup. He claimed he was sick when he testified. His first testimony to interrogators, however, was a lucid account of his links to FETÖ. He confessed in his testimony that he wiretapped Necdet Özel, the former Chief of General Staff and gave secretly-recorded tapes to FETÖ members. He also acknowledged that he had been taking orders from FETÖ since his military career started. He has also confessed that Gülenists helped him to pass a military school exam at the beginning of his career. In yesterday's hearing, Türkkan claimed his first testimony was false.

Cemil Turhan, a colonel among the defendants who signed the martial law directive of the coup plotters, blamed two of his superiors for preparing the documents announcing the coup and said he was only carrying out orders. He denied being actively involved in the putsch bid. Legal experts and critics of FETÖ say defendants in the case will likely try to deliberately prolong the trial by sticking to denial.

FETÖ, whose senior members remain at large abroad, have transmitted some hope to its followers by issuing messages that they would be "freed" soon, according to media outlets, hinting at attempts to free the putschists, either by infiltrators from the terrorist group in the judiciary or by starting riots in prisons where they are held.

The trial, which is expected to continue until July 16, is being held in a courtroom inside a sprawling prison complex in the Ankara suburb Sincan. The complex is also where most of the coup plotters have been held since the coup bid was quelled.

The list of defendants is a who's who of alleged masterminds of the coup bid and those who helped its partial success. Among them are members of the so-called 38-member "Peace At Home Council," which declared the coup on public broadcaster TRT after it was taken over by putschists.

The main suspect in the case is Fetullah Gülen, a former preacher who turned his religious movement into a secretive terrorist group and currently resides in Pennsylvania in the United States. Ankara is seeking his extradition from the U.S. and if he is deported, he will likely be sentenced to multiple life sentences.

Nine defendants were released pending trial while 12, including Gülen, are at large. Apart from soldiers that range from generals to captains, 12 civilian defendants including civil servants, teachers and businesspeople are being tried in the case. An indictment by three prosecutors from the Ankara Chief Public Prosecutor's office says FETÖ members planned to overthrow the constitutional order "in order to replace it with an order of their own design."

"Heinous members of FETÖ infiltrated the Turkish Armed Forces and mobilized more than 8,000 (pro-coup) troops, employed 35 warplanes, 37 helicopters, 74 tanks and 246 armored vehicles to bomb and take over democratic institutions, from the Presidential Palace to Parliament," the indictment reads. President Erdoğan, Hulusi Akar, and other anti-coup commanders are the plaintiffs in the trial.

An unprecedented public resistance resulting in a large number of deaths frustrated pro-coup troops who were forced to surrender when anti-coup soldiers and police officers surrounded them. Out of the 221 people involved in the putsch attempt, 38 defendants face multiple life sentences in the trials.
Last Update: May 23, 2017 6:54 pm
RELATED TOPICS