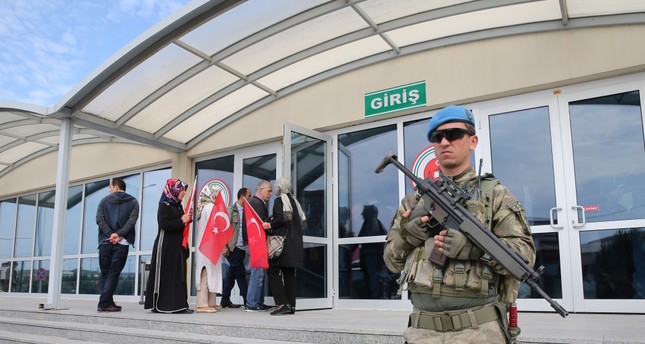 A soldier stands guard outside the courtroom as families of those killed by putschists enter the courtroom for Istanbul’s main coup trial.

Much to the chagrin of families of the victims who died in the July 15 coup attempt, defendants, mostly those caught red-handed while executing the putsch bid last year, stuck to denial, blaming others in the new week of trials. Legal experts say that the defendants are seeking to prolong trials as the Gülenist Terror Group (FETÖ) blamed for the putsch bid, keep their jailed followers' hopes high for the possibility of releases. Hakan Evrim, the general who was commander of the key military base captured by coup plotters, joined the chorus of suspects denying blame. In yesterday's hearing in capital Ankara, Evrim delivered a lengthy tirade on the failures of the coup he described as amateurish, and despite video evidence showing him with one of the alleged masterminds of the coup, he denied he knew the suspect.

Evrim is among 221 suspects who include Fetullah Gülen, leader of FETÖ and Akın Öztürk, the alleged military leader of the coup bid. He was serving as commander of Akıncı air base in the capital Ankara as the coup unfolded and it was that base where planes striking the presidential palace and civilians took off from. It was this same base where top military brass opposing the coup were held.

The former general, who was captured after the attempt was foiled, first denied his proposal to Gen. Hulusi Akar, Chief of General Staff, to have him phone Fetullah Gülen. He then listed a set of "shortcomings" and "errors" on the part of the putschists. He said a "real" coup would have succeeded, given the firepower of the army, and repeatedly denied his role in the putsch. Evrim failed to explain his orders to aircraft piloted by putschists and denied he gave a military salute to civilian Kemal Batmaz while the latter was inside the base with Evrim. Kemal Batmaz, the former executive of a FETÖ-run conglomerate, is one of the masterminds of the coup according to prosecutors and was in the Akıncı base with other FETÖ-linked civilians assisting the terrorist group's infiltrators in the army.

Evrim denied any links to the Peace At Home Council of putschists who sought to seize power, killing 250 people who opposed them in the process. He even claimed he was held at the base against his will by the coup plotters.

His defense echoes the testimony of Akın Öztürk and İlhan Talu, other top generals who testified in the trial held in a courtroom inside a maximum-security prison complex in Ankara's Sincan suburb. Öztürk, a former Air Forces Commander, had denied he took part in the coup and it was "a coincidence" that he was at the base at the time of the coup.

Mehmet Partigöç, a brigadier general who is accused of sending "martial law directives" of the putschists to military units across the country and aiding in planning the putsch bid with other generals and senior FETÖ figures, was supposed to testify in yesterday's trial. He and two other military officers expected to testify did not speak, as Daily Sabah went to the trial, as their lawyers did not show up.

Elsewhere, the trial of six generals and 17 officers accused of commanding the coup attempt in Istanbul commenced at a courtroom inside Silivri prison complex yesterday. It is the first major coup trial in the city where several low-ranking officers are already on trial for attempts to take over the governorate, a public broadcaster and other locations.

Plaintiffs include 89 people who were killed by the putschists on late July 15 and early July 16, when ordinary civilians flooded the streets to resist the coup plotters.

The indictment includes the pre-coup planning undertaken by plotters, dividing the province into control zones.

Fetullah Gülen, who lives in Pennsylvania, United States, is accused of being the leader of the coup, using Adil Öksüz, a fugitive academic, as his principal means of communications with his operatives within the military.

Öksüz, a mid-level academic, was appointed as FETÖ's senior imam of the military and he oversaw the plotting and the execution of the coup from the Akıncılar Air Base in Ankara.

After the coup failed, Öksüz was detained along with other senior plotters at the base, but was released under shadowy circumstances. He remains a fugitive.

In coup trials underway across Turkey, hundreds of military officers and civilians helping them in the putsch bid face multiple life sentences. Nevertheless, most defendants, despite the mounting evidence showing their involvement, remain defiant of the courts. Ahmet Özel, a lawyer representing President Recep Tayyip Erdoğan in the Istanbul coup trial, says it is typical of FETÖ, "to pull off fraudulent tactics to hide themselves." FETÖ planted its men - and women - in every institution - from the army to law enforcement - for decades before it openly declared war against the state by two coup attempts in 2013. Disguised with code names, secretive correspondence and a distinct secular lifestyle worlds away from what FETÖ promoted as a religious life, its members easily infiltrated into the places they ultimately aimed to take over.

"They grew, like a malicious tumor does," Özel says. "I did not see any sign of remorse or at least humiliation in the faces of defendants caught red-handed," he laments. According to Özel quoted by Anadolu Agency, this is a common case in the last three months of trials. "I think 'outside forces' helped them to recover mentally. If some politicians call the coup 'staged' or 'restricted', it will understandably help defendants to feel relieved," he said. He was referring to a common argument by the opposition Republican People's Party (CHP) whose members claim the coup was known and that the government allowed it "to happen" to implicate officers.

Mustafa Doğan İnal, the lawyer for İlhan Varank, an eminent academic killed by putschists when he confronted them, says defendants base their defense on denial and they pretend "like the coup never happened." "The air of desperation among them immediately after the coup apparently was replaced with confidence. It might be related to their support from outside (from FETÖ members) and dreams," he says. İnal refers to "dreams" voiced by supporters of FETÖ, which uses religion and in this case dreams with religious symbols to rally its supporters - that say "they would be liberated from the prison."