Key coup figure testifies as Ankara vows to get justice 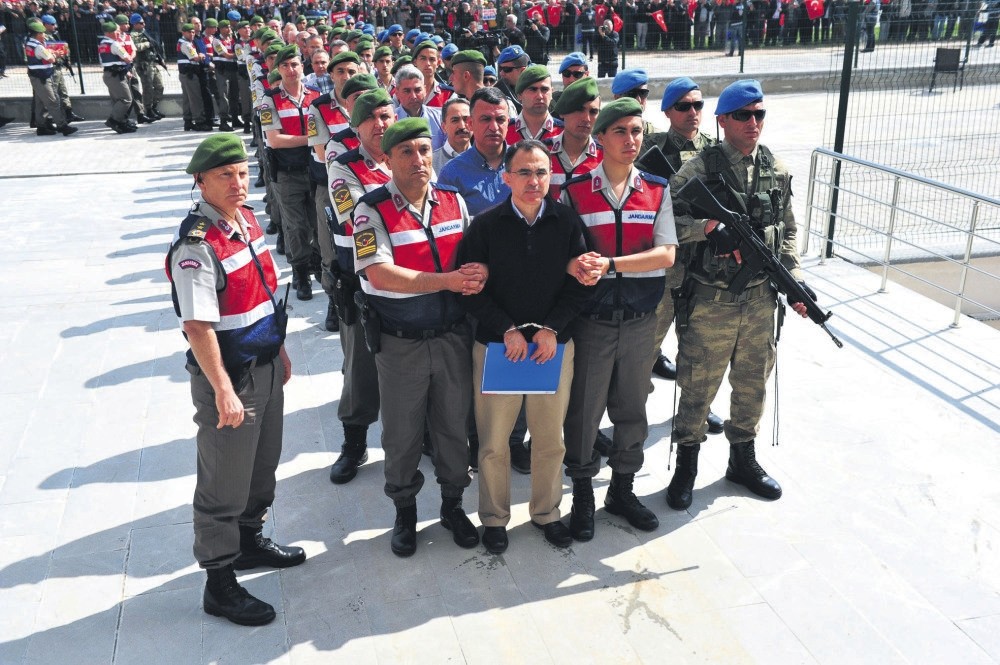 Officers accused of carrying out the putsch await for entrance to the courtroom in the company of soldiers escorting them in Ankara.
by Daily Sabah Jun 03, 2017 12:00 am

Orhan Yıkılkan, chief adviser to the chief of General Staff, testified in Friday's trial of the July 15 coup bid blamed on FETÖ. Like other defendants, he denied involvement in the attempted putsch, while the president and justice minister claimed defendants were ‘lying' and said that justice would prevail

Staff Colonel Orhan Yıkılkan was one of the closest figures to Chief of General Staff Hulusi Akar. He is now accused of running last year's July 15 coup attempt that killed 250 people across the country. He was the latest suspect to testify in ongoing trials concerning the putsch bid blamed on infiltrators from the Gülenist Terror Group (FETÖ) within the military. Yıkılkan, like all others who testified before him, denied any role in the coup attempt despite the evidence. President Recep Tayyip Erdoğan and Justice Minister Bekir Bozdağ joined a chorus of critics of the behavior of alleged putschists on trial. Erdoğan and Bozdağ assured the public that justice will be delivered in the trials, which are being closely watched by the families of the victims of the coup attempt.

Yıkılkan was the chief adviser to Akar when pro-coup troops in the army headquarters, aided by an elite military unit dispatched from another base, took Akar and another anti-coup general hostage. He is accused of commanding the coup, at least for a few hours, by issuing orders from the Peace At Home Council of the putschists to military units across Turkey, before Mehmet Partigöç, another senior officer in the headquarters, took over from him. Yıkılkan and Partigöç are among 221 defendants in the main trial on the coup started last week in the capital city of Ankara.

Searching his office, police found documents by Yıkılkan showing his role in the coup. One note contains the names of Justice Minister Bekir Bozdağ, Ankara Mayor Melih Gökçek and counter-terror police chief Turgut Aslan and next to their names are number of military vehicles (gunships and armored personnel carriers) for soldiers who would be sent to capture or kill them. Aslan was "invited" to a military base by putschists and was shot in the head there. Yıkılkan denied that the notes were his in his testimony to the court.

He also contradicted the statement of another defendant in the trial and said he did not tell the defendant that "martial law was declared." He also denied participation in meetings with other putschists before the coup to plan it. Yıkılkan was among members of the Peace At Home Council who convened in a villa in Ankara days before the coup, under the leadership of theology lecturer Adil Öksüz. Öksüz, an unassuming academic, was actually a senior leader of FETÖ and is prime suspect in the coup cases where he, like other defendants, face life sentences. He is accused of masterminding the coup with the approval of FETÖ leader Fetullah Gülen and remains at large.

Yıkılkan claimed he had "intelligence" that a coup would happen and alerted authorities. He said that, in February 2016, he found out the name of Semih Terzi among those planning a coup but did not cite it to authorities due to a "lack of evidence." Terzi, a brigadier general, was killed as he tried to capture a military base in Ankara with fellow putschists. His name came up in defenses of other defendants in coup trials as many in the dock blame him or fugitive officers for the coup attempt.

He acknowledged his phone conversation with Ümit Gencer, a pro-coup officer who forced a TV presenter to read the putschists' message on live TV and said he instructed Gencer not to read the message. He said he did not remember what he talked about during his various phone calls to those involved in the coup attempt.

Yıkılkan also denied he made online searches for the hotel where President Recep Tayyip Erdoğan was staying during the coup attempt, despite evidence showing the searches found in his cellphone.

So far, no defendants in the Ankara trial have admitted their role in the coup attempt, and to the contrary, they have claimed they fought coup plotters. Only a few defendants remain among the generals to present their defense. According to prosecutors, the putsch bid was the work of the 38-member Peace At Home Council, consisting of FETÖ's infiltrators in the army. One member of the council was killed during the coup bid, while another member admitted he consciously joined the planned coup though he denied links to the terrorist group. Akın Öztürk, who is accused of commanding the coup, denied allegations.

President Erdoğan on Thursday lashed out at putschists but assured them that they would "face the bitter end awaiting them."

"They were caught red-handed but they claim they did not see any coup attempt. You cannot deceive people. You cannot say you did not do it after using F-16s, helicopters, tanks, guns to fire upon the public. Documents, footage, evidence exists and we will work to bring everyone to justice, including their leaders abroad," Erdoğan said in a speech. The president said he never doubted the courts would deliver "the right verdict." Speaking at a conference on Friday, Minister Bozdağ cited the "shared" defense of FETÖ members in coup trials. "They say they did not do it despite photos, videos showing them. This is because Fetullah Gülen instructed them to 'deny everything'," Bozdağ said. The minister said FETÖ comforted its members and promised recovery after Turkey launched a nationwide crackdown on the group. "They even give dates to their followers for a new coup so those captured would not confess their role in the coup," Bozdağ said.