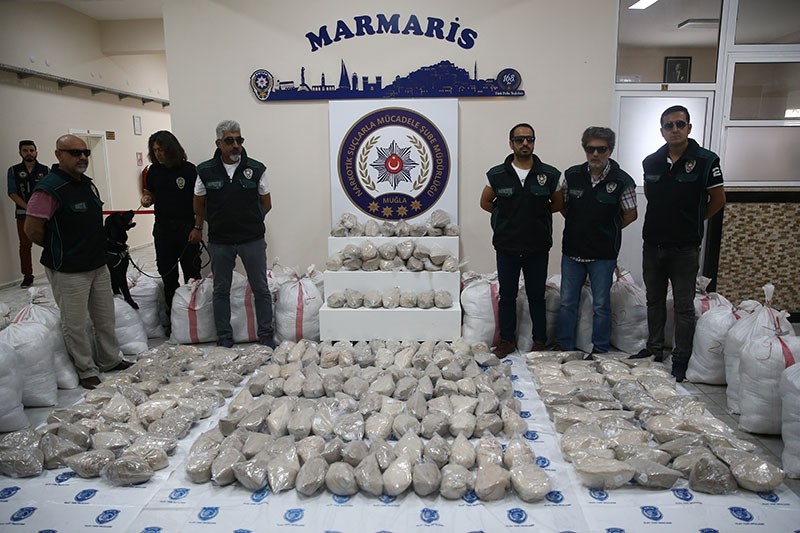 Turkish authorities seized more than 1 ton of heroin aboard a ship off the Suez Canal in an anti-drug operation last week, authorities announced yesterday as the contraband was shown to media. It is the largest amount of drugs seized in a single operation, security sources said.

Video footage of the operation shared with the media showed Navy special operations units in boats approaching the Commander Tide, which carried a Congolese flag, and detaining its crew before Coast Guard officers rappel from a military helicopter with K-9 units to carry out a search onboard.

The Navy officers arrested nine Turkish nationals and found 1,071 kilograms of heroin in dozens of sacks stored in hidden compartments aboard the vessel, an official said on condition of anonymity.

The operation was conducted in international waters after authorities acted on a tip, making the largest single heroin seizure in recent Turkish history. The Commander Tide was docked off Marmaris in western Muğla province.

Police officers posed with 1,007 small packages of heroin found onboard the ship at a press conference yesterday. Speaking to reporters, officers said the suspects are still in custody and will be referred to court after their interrogation is completed.

The packages had emblems of machine guns on them. The origin of the heroin was Afghanistan. The ship was heading to Greece from Egypt when it was intercepted.

Turkey is a transit country for drugs moving between Europe, the Middle East, Asia and Africa and it also hosts smugglers bringing cannabis to European countries. Occasionally, counter-narcotics police conduct operations in international waters to curb trafficking. In 1993, a joint operation with the United States targeted two ships operated by Turkish drug runners in the Mediterranean Sea, seizing 14 tons of heroin. The crew of one of the ships deliberately sank it with more than 3 tons of heroin onboard when security forces closed in. In January 2016, Operation Albatross by Turkish police some 35 miles off the coast of Libya seized a Bolivian-flagged cargo vessel loaded with 13 tons of heroin, capturing nine suspects.

According to the United Nations Office on Drugs and Crime (UNODC), Turkey had one of the largest heroin seizures in 2014, accounting for 16 percent of heroin confiscated worldwide. A UNODC report published last year says Afghanistan accounts for some 80 percent of global seizures of opiates. UNODC estimates show that 90 percent of heroin illicitly entering Europe comes from Afghanistan and the drug trade is mostly used to finance terrorism.