Another key figure in coup bid resorts to denial in court 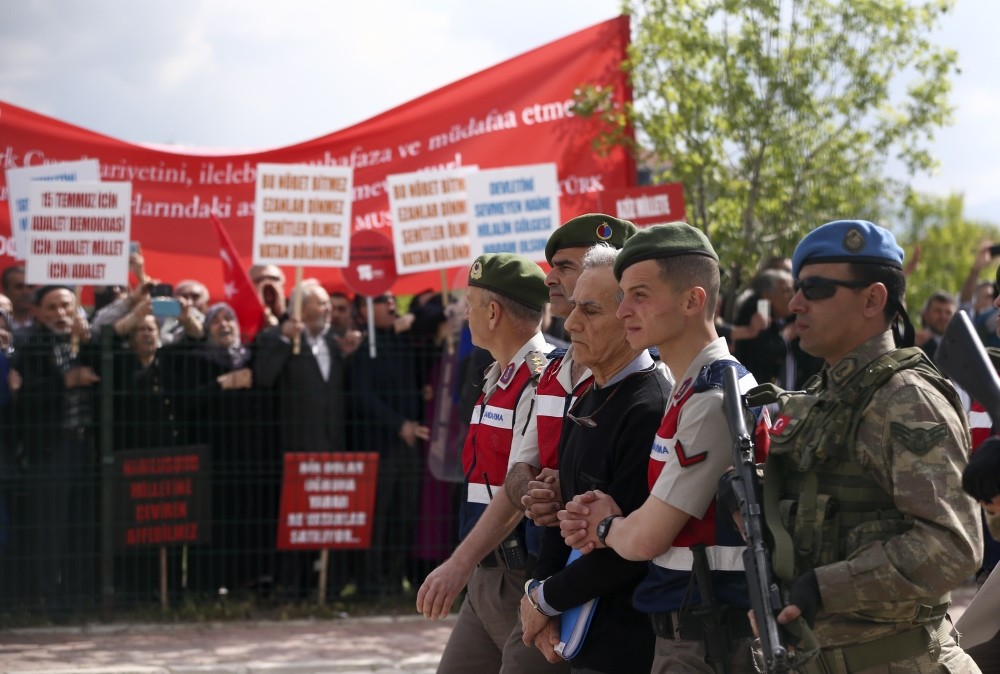 Gendarmerie officers escort a suspect to court as protesters denounce the defendants.
by Daily Sabah Jun 09, 2017 12:00 am

In the latest episode of trials marked with outright denials by almost all the suspected putschists Muzaffer Düzenli, a former colonel accused of orchestrating the coup attempt in Istanbul during FETÖ's bloody power bid last year, denied involvement despite evidence that shows he ordered the killing of civilians

An important figure in the foiled attempt testified in Thursday's hearings on the July 15 coup bid during which officers linked to the Gülenist Terror Group (FETÖ) attempted to seize power. Col. Muzaffer Düzenli, previously the department head at the Office of the Chief of General Staff, testified at the main trial about the bloody bid that killed 250 people. Like other defendants who have testified in the capital of Ankara, Düzenli resorted to outright denial, claiming he was not involved in the attempt and even went on to dismiss his own initial testimony after his arrest.

The officer, who was stationed in Ankara and in a military base commanded by putschists on the night of the coup, is accused of being one of the attempt's masterminds in country's most populated city, Istanbul. Düzenli was among the military officers who convened at a military school in Istanbul, where the officers have been accused of planning the coup, a few days before the attempt. The colonel has been accused by fellow putschists of giving the order to "fire on the civilians" who had confronted pro-coup officers and blocked the route of military vehicles.

In his court statements, Düzenli made a lengthy tirade about the coup without elaborating on what he did that night and claimed it was "a controlled putsch," a rhetoric popular with FETÖ supporters and the opposition Republican People's Party (CHP). He said authorities were aware of a coup attempt but allowed it to happen so they could justify dismissals and arrests of officers. Prosecutors say it was Düzenli who rescheduled the coup bid to the evening of July 15, instead of the original schedule of 3 a.m. on July 16, after the putschists realized the intelligence service had discovered their plan. Indeed, the first move of the putschists was in Istanbul, where Düzenli had originally planned the coup, and where he used pro-coup troops to block a main bridge connecting city's European and Asian sides.

The former colonel, who was arrested immediately after the putsch was quelled, said he was victim of "a great conspiracy" and claimed he had no links to FETÖ. His defense has been repeated by others who had previously spoken in court. Almost all of the defendants have claimed they were "set up" by other officers and wrongfully implicated in coup charges. Evidence, such as the security camera footage from the military bases and the suspicious actions of defendants, however, contradict them.

Among 221 defendants who will testify, Muzaffer Düzenli is also scheduled to testify in the main coup trial focusing on the capture of army headquarters and Chief of General Staff Gen. Hulusi Akar. Fetullah Gülen, the leader of FETÖ, is the prime suspect in the case. He, along with other defendants, face multiple life sentences on coup charges. The trial, which started about two weeks ago, is being held inside a courtroom in a maximum-security prison complex in Ankara's Sincan suburb. Most members of the Peace At Home Council of the military junta testified in the trial, including Akın Öztürk, the former air force commander accused of commanding the pro-coup troops. All of the defendants have denied the accusations, though some acknowledge joining the coup after being ordered to do so by their superiors. The trial has been closely watched by the families of the coup victims, representatives of political parties and nongovernmental organizations. The observers complain that the defendants seek to prolong the trial through false statements and have called on Ankara to reintroduce the death sentence, which was abolished years ago, for coup plotters. President Recep Tayyip Erdoğan, who escaped an assassination attempt by putschist troops on July 15, lashed out at putschists and assures the public that they will "face the bitter end awaiting them." "They were caught red-handed, but they claim they did not see any coup attempt. You cannot deceive people. You cannot say you did not do it after using F-16s, helicopters, tanks and guns to fire on the public. Documents, footage and evidence exists, and we will work to bring everyone to justice, including their leaders abroad," Erdoğan said in a speech last week.

Only a few defendants remain among the generals to present their defense in the trial. According to prosecutors, the putsch bid was the work of the 38-member Peace At Home Council, consisting of FETÖ's army infiltrators. One member of the council was killed during the coup bid, while another member admitted he consciously joined the planned coup, though he denied links to the terrorist group.