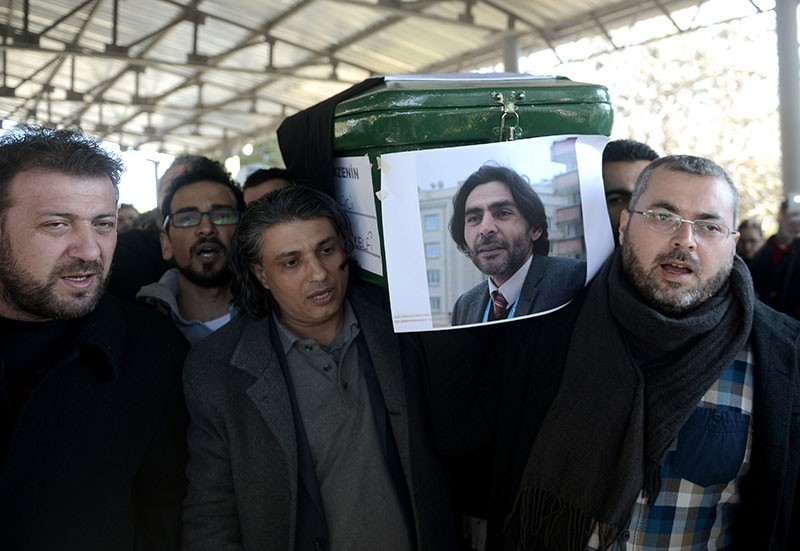 A court in southeastern Gaziantep province gave Yusuf Hamed Eshverihi one life sentence for attempting to overthrow the constitutional order in relation to his links to Daesh and another for murder.

Three other suspects, Farag al-Hussein, Ali Çerkez and Reyad Matar, were acquitted for lack of evidence.

Jerf had been vocal about the atrocities of the Assad regime, which made him a target and forced him to flee to Turkey. Once in Turkey, he made two anti-Daesh films.

Just before his death, he was about to leave Turkey with his family for France where he had been granted asylum.

Jerf was among several Syrian journalists and activists targeted by Daesh. Last year, Muhammed Zahir al-Shurgat was shot dead as he was walking on the street in Gaziantep. Daesh's semi-official al-Amaq news agency claimed the terrorist group carried out the attack using a gun with a silencer. Al-Shurqat worked for a channel called Aleppo Today TV that is strongly opposed to Daesh militants who have taken control of much of Syria's northern Aleppo province. In October 2015, the terrorist group was blamed for the killing of two Syrian journalists in Şanlıurfa, also in the south, near the border. Two men, identified as Firas Hammadi and Ibrahim Abdulkadir, were working for a newspaper of Syrian activists when they were found at home with their throats cut.

Daesh is blamed for a string of attacks in Turkey, ranging from suicide bombings to gun attacks. In January, a lone Daesh gunman stormed a popular nightclub in Istanbul where he killed 39 people during New Year's celebrations. The gunman was caught a few weeks later.

Turkey is one of the many main enemies of Daesh, which emerged in Iraq and Syria, Turkey's two neighbors. Turkey is also tackling an influx of foreign fighters looking to sneak into Syria and Iraq where Daesh controlled towns and a large swathe of territories. Since Daesh's emergence, Turkey has detained over 5,000 Daesh suspects, deported over 3,290 foreign terrorist fighters from 95 countries and refused entry to more than 38,269 individuals in anti-terror drives. Turkey also launched Operation Euphrates Shield last year and backed Syrian opposition groups fighting Daesh in Syria. The operation, which took place from August 2016 to April 2017, saw the liberation of the Syrian towns of Jarablus, al-Rai, Dabiq and al-Bab from Daesh control.

The terrorist group often hunts down journalists reporting from areas they control and sometimes publicly executes them. According to a 2016 statement by Reporters Without Borders, Daesh also holds 21 professional and non-professional journalists and media contributors hostage in Iraq and Syria. The group notoriously beheaded US reporters James Foley and Steven Sotloff as well as Japanese video journalist Kenji Goto in the past few years.