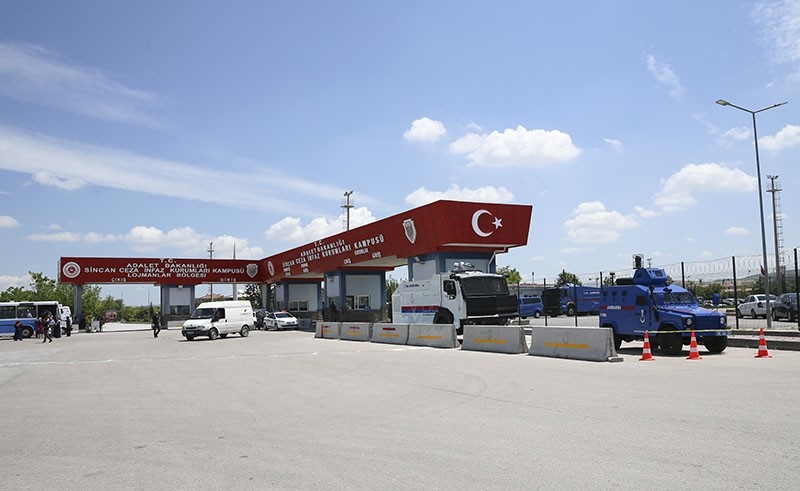 The first verdict in cases regarding the coup attempt in the capital Ankara was delivered yesterday with 23 pro-coup officers sentenced to life imprisonment. The defendants were accused of abducting Fahri Kasırga, the Secretary General of Turkish Presidency who was liberated after the deadly putsch blamed on the Gülenist Terror Group (FETÖ) was quelled.

Eighteen defendants were sentenced to aggravated life imprisonment and an additional 12 years for the coup attempt that killed 250 people across Turkey on July 15, 2016, while five others received life sentences and additional 10-year sentences for crimes related to the coup attempt. The court in Ankara also sentenced former colonel Muhsin Kutsi Barış to 12 years for "restricting liberties of an individual" in connection with Kasırga's abduction.

Presidential aide Fahri Kasırga, whose official residence is inside the Presidential Guard Regiment compound in Ankara, was directed at gunpoint to an ambulance by pro-coup troops and was taken to Akıncı, a military base in the capital that served as the command center of the putschists during the attempt. Kasırga was found locked in a room inside the base after the coup attempt was quelled. He was one of many people held hostage at the base. The pro-coup officers also held army chief Hulusi Akar and other commanders hostage at the base.

All defendants who were sentenced to life are career officers, while two conscripts who denied participating in the capture of Kasırga and the coup were released by the court. Brigadier General Ali Kalyoncu, the only fugitive defendant in the case, will be subject to another trial.

According to Kasırga's testimony, he was blindfolded and his hands were tied by the putschist soldiers. "They cuffed my feet as well," he said. Kasırga also said he reached out to President Recep Tayyip Erdoğan on the night of the coup attempt, saying the situation looks bad. "Our president instructed me to go to the Presidential Palace and manage the operation from there," he said. The secretary general also asserted in his testimony that he told the putschist soldiers to shoot him dead after hearing that they were attempting a coup d'etat. The attempted coup by the Gülenist faction within the Turkish military to overthrow the democratically elected president and government was defeated after people took to the streets upon President Erdoğan's call to protect their democracy.

Although the courts handed down prison terms in other trials related to the coup attempt, it is the first time a verdict was delivered in a trial in Ankara where the coup attempt was the most violent. The majority of those killed in the coup were shot dead by pro-coup troops at strategic locations including the presidential palace and army headquarters. The first verdict in a trial related to the July 15 coup attempt was issued by a court in eastern Turkey in January. Two career officers were sentenced to aggravated life imprisonment on charges of "violating the Constitution," the formal name for a military coup attempt. Staff Col. Murat Koçak and Staff Major Murat Yılmaz, who served as military commanders in a gendarmerie base in the eastern city of Erzurum, were the first to be sentenced among the thousands of officers arrested after the coup attempt. Several trials on the coup attempt are underway and the leaders of the coup attempt - the so-called Peace At Home Council - are being tried at the main coup trial in another court in Ankara. Some 221 people including Akın Öztürk, the alleged commander of pro-coup troops, face lifetime imprisonment. Fetullah Gülen, the U.S.-based leader of FETÖ, is the prime suspect in all trials and faces aggravated life imprisonment for his role in masterminding the coup attempt. Prosecutors say Adil Öksüz, a fugitive FETÖ member who was briefly detained when he was captured at Akıncı base on July 15, plotted the coup with FETÖ's infiltrators in the army and they executed the coup after Gülen approved it.

In the coup trials, most of the defendants, despite the mounting evidence showing their involvement, deny the charges brought before them in the courts. FETÖ planted its men - and women - in every institution ranging from the army to law enforcement for decades before it openly declared war against the Turkish state and waged two coup attempts in 2013. Disguised with code names and accused of using secretive methods of correspondence and a distinct secular lifestyle worlds away from what FETÖ promotes as a religious life, its members infiltrated positions in key institutions that they ultimately sought to take over. The group's leader denies the allegations, although an investigation show intricate ties between "civilian" Gülenists and FETÖ's alleged infiltrators.

More coup trials are scheduled to start later this summer and the public, which repeatedly demands the reinstatement of the abolished death penalty exclusively for the coup convicts, is calling upon the authorities to speed up the trials in rallies outside the tightly guarded courtrooms.