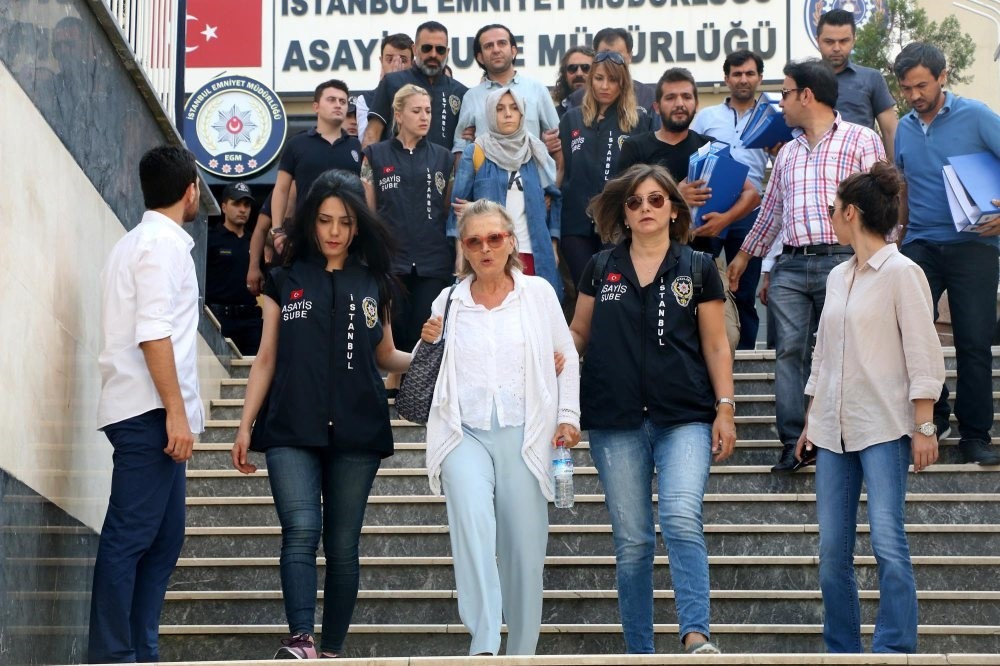 Officers escort Nazlu0131 Ilu0131cak as she leaves a police station for prison after her detention last year.
by Compiled from Wire Services Jun 20, 2017 12:00 am

The trial of 17 FETÖ suspects, including journalists accused of having links to key figures in last year's foiled coup attempt began Monday in Istanbul. The defendants face sentences ranging from 15 years to life in prison on coup-related charges

Journalist brothers Ahmet and Mehmet Altan and veteran journalist Nazlı Ilıcak were among the 17 people who went on trial in Istanbul yesterday over last year's coup attempt blamed on the Gülenist Terror Group (FETÖ). The Altan brothers and Ilıcak, who were fierce advocates for the terrorist group, are accused of calling for the coup to take place and for their intimate ties with the putschists, and senior figures of the terrorist group. Prosecutors are asking for sentences varying between 15 years to life imprisonment on coup charges and lesser charges related to being members of a terrorist group. Ilıcak and the Altan brothers face life in prison if convicted.

The defendants were arrested following the coup attempt, though a majority of them remain at large. Ten suspects are on the run and one suspect was released pending trial. The case is the first of its kind for journalists linked to the coup and more such trials will follow in the coming months.

Nazlı Ilıcak, a staple of Turkish media for decades, has been a staunch defender of FETÖ, claiming it was not a terrorist organization. She defended the group all the way up until before the coup attempt, which left 249 people dead and hundreds of others injured. In her first testimony after her arrest, Ilıcak said she realized FETÖ was indeed a terrorist group.

The terrorist group is accused of masterminding the foiled putsch bid with the aid of its infiltrators in the army.

Ahmet Altan is a journalist who worked for Hürriyet and Milliyet before founding Taraf, a newspaper that had been a mouthpiece for FETÖ before it was closed down last year. The Altan brothers were detained in September. Amongst the other charges, the Altan brothers and Ilıcak are accused of appearing together on a pro-FETÖ TV channel just before the coup, where they issued a message that a putsch was to take place.

Mehmet Altan, Nazlı Ilıcak and three other defendants, who are also in custody, appeared before the 26th High Criminal Court in Istanbul while Ahmet Altan was set to testify via video-conference from prison.

Representatives from diplomatic missions from United Kingdom, Germany, Denmark, France and Sweden, who have been conspicuously absent from other coup trials, flocked to the courthouse as observers this time around.

Prosecutors are asking for three instances of aggravated lifetime imprisonment for Ahmet Altan, Mehmet Altan and Nazlı Ilıcak on coup charges, in addition to up to 15 years in prison for "committing crimes for a terrorist group."

Along with three defendants, Ekrem Dumanlı, the former editor-in-chief of FETÖ mouthpiece Zaman, former journalist Emre Uslu and writer Tuncay Opçin, all known for their barrage of pro-FETÖ propaganda on social media, face lifetime imprisonment on coup charges. Uslu, Opçin and Dumanlı were spotted in the United States where FETÖ leader Fetullah Gülen resides, following their disappearance after they were issued arrest warrants.

Şemsettin Efe, the Washington representative of the now-defunct Gülenist Samanyolu TV, is another defendant on the run. On the night of the coup, Efe showed keen support for FETÖ in live online broadcasts.

Professor Osman Özsoy, a fervent supporter of the terrorist group and among defendants of the case, made headlines when his statements on a TV show one month before the coup attempt emerged.

"Wish I could have been a colonel. I would be more helpful to the process," Özsoy cryptically said while discussing the "challenges" Gülenists faced.

Other suspects include Mehmet Kamış, the deputy editor-in-chief of the Zaman newspaper, which was appointed trustees before the coup attempt for its links to the terrorist group, its Israel correspondent Abdülkerim Balcı, Bülent Keneş, who was editor-in-chief of Today's Zaman, the English version.

Tibet Murat Sanlıman, the head of the advertising agency who shot an ad for Zaman daily which ominously implied a coup one year before it actually took place, was released pending trial in the case.

Prosecutors say Ilıcak, Ahmet and Mehmet Altan, Osman Özsoy, Şemsettin Efe, Emre Uslu and other defendants had contacts with five "civilians" captured at Akıncı, a military base served as a command center of putschists on July 15.

The "civilians" were Adil Öksüz, Kemal Batmaz, Hakan Çiçek, Nurettin Oruç and Harun Biniş. After Fetullah Gülen, Adil Öksüz is the most wanted figure in the coup case. A theology lecturer by profession and a senior FETÖ figure, Öksüz is accused of planning the coup attempt in meetings with generals loyal to the terrorist group. He was controversially released by judges believed to be linked to FETÖ after his initial capture in the base and then disappeared.

Kemal Batmaz, another "civilian" found in the base after the coup attempt was foiled, is accused of being an accomplice of Öksüz. A former executive of Kaynak, which is a business conglomerate that financed FETÖ for years, Batmaz was at the base with a "civilian" Harun Biniş. According to prosecutors Biniş accompanied Adil Öksüz in pre-coup meetings of Gülenist generals.

Hakan Çiçek, owner of a FETÖ-linked college and Nurettin Oruç, a filmmaker, were the other "civilians" captured at the base and some 17 defendants in FETÖ's media arm trial maintained contact with all of them or at least one person, according to prosecutors.

In March, 29 defendants went before an Istanbul court for FETÖ's influence in the media, including Atilla Taş, a former pop singer turned columnist. They face prison terms of up to 22 years on charges of membership to a terrorist group, and aiding and abetting a terrorist group.

The terrorist group once wielded considerable clout in the media where it ran a broadcaster. The group owned several TV stations, a publisher behind newspapers and magazines that disseminated the group's propaganda and several radio stations.

Most were closed down as part of the crackdown on FETÖ and were handed to trustees as the legal process against FETÖ members got underway. The media was key for Fetullah Gülen, the U.S.-based leader of the terrorist group, to spread his messages to his followers.

Gülen, who faces extradition from the U.S., is already implicated in a string of criminal cases from the coup attempt carried out by his followers in the army, to sham trials against his critics.

Since December 2013, when FETÖ emerged as the perpetrator of two coup attempts against the government, FETÖ has been regarded as a security threat. Prosecutors are claiming that the group's infiltrators in law enforcement, judiciary, bureaucracy and the military, had waged a long-running campaign to topple the government.

In a related development, a trial of 96 pro-coup troops accused of attempts to seize TV stations on July 15, resumed in Istanbul yesterday. The defendants were among soldiers who stormed the Istanbul headquarters of public broadcaster TRT and private satellite TV provider Digiturk.

A large number of trials involving pro-coup troops are underway since they first started in December 2016. Gülen, the U.S.-based leader of FETÖ, is the prime suspect in all trials and faces aggravated life imprisonment for his role in masterminding the coup attempt.