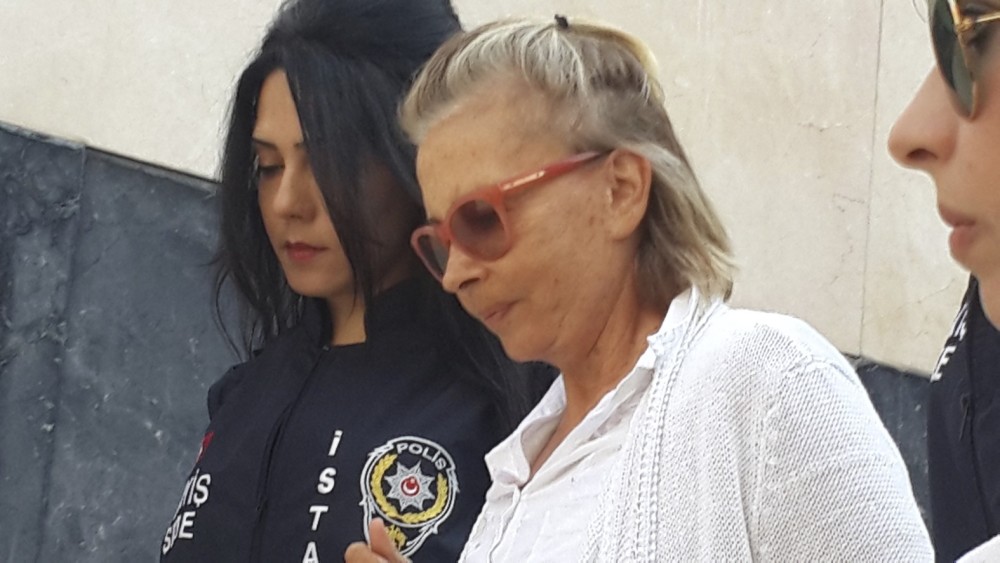 Nazlı Ilıcak is known for her book vindicating the Gülenist Terror Group (FETÖ) and her sympathy for its fugitive leader Fetullah Gülen. However, in her trial yesterday over links to the group accused of masterminding the July 15 coup bid last year, she said she was "secular" and "wouldn't follow an imam," referring to Gülen's former profession as a preacher.

Ilıcak is among the 17 defendants accused of being members of the "media arm" of the terrorist group which is blamed for last year's military coup attempt that killed 249 people. Ilıcak and others knew of the coup attempt and conducted propaganda to pave the way for it by infiltrators of FETÖ in the army, prosecutors say.

She has penned articles in a FETÖ-linked newspaper, was among the defenders of Gülen and his followers after the 2013 coup attempts. She was the author of a book whose title roughly translates as "Is the Cemaat Guilty for Everything?" that distances Gülen and his followers from a string of criminal incidents. The book has practically vindicated FETÖ's role in several trials later found out to be based on false charges and evidence and as the work of FETÖ's followers in the judiciary and police.

"Why should I want Fetullah Gülen to run the country?" Ilıcak told the court yesterday, on the second day of her defense in the hearing, referring to the U.S.-based leader of the terrorist group. "I wouldn't be a follower of a man called universal imam," she added. Long before they emerged as a terrorist group bent on seizing power, Gülenists exploited the country's conservatives to recruit followers by posing as the "Hizmet" (Service) Movement, setting up charities and schools across the country. In 2013, the group, through its infiltrators in the judiciary and police, tried to topple the government by implicating people close to the cabinet in multiple trials on false evidence.

Ilıcak, Ahmet Altan and Mehmet Altan - two journalist brothers - were discussing a potential coup on a TV show only two days before the putsch bid. She defended them by saying that the TV show did not imply any coup.

"I owe a lot to the secular republic of Turkey," Ilıcak said, disputing her ties to FETÖ, which had been branded as so-called "Islamists" in the past by the country's secular elite.

Her contacts with five senior FETÖ members are another important piece of evidence against her but Ilıcak defended herself by stating that other people contacted FETÖ members too when they did not know that these people were linked to the terrorist group.

Ilıcak and the Altan brothers, who were fierce advocates for the terrorist group, are accused of calling for the coup to take place and of intimate ties with the putschists, as well as senior figures of the terrorist group. Prosecutors are asking for sentences varying between 15 years to lifetime imprisonment on coup charges and lesser charges related to being a member of a terrorist group. They face life in prison if convicted. The defendants were arrested following the coup attempt, though a majority of them remain at large. Ten suspects are on the run and one suspect was released pending trial. The case is the first of its kind for journalists linked to the coup and more such trials will follow in the coming months. Ilıcak, a staple of Turkish media for decades, has been a staunch defender of FETÖ, claiming it was not a terrorist organization. She defended the group all the way up until before the coup attempt. In her first testimony after her arrest, Ilıcak said she realized FETÖ was "a terrorist group."

Along with the three defendants, Ekrem Dumanlı, the former editor-in-chief of FETÖ mouthpiece Zaman, former journalist Emre Uslu and writer Tuncay Opçin, all known for their barrage of pro-FETÖ propaganda on social media, face lifetime imprisonment on coup charges. Uslu, Opçin and Dumanlı were spotted in the United States where FETÖ leader Fetullah Gülen resides, following their disappearance after arrest warrants for them were issued. Journalist Osman Özsoy, a fervent supporter of the terrorist group and among the defendants in the case, made headlines when his statements on a TV show one month before the coup attempt emerged. "I wish I could have been a colonel. I would be more helpful to the process," Özsoy cryptically said while discussing the "challenges" Gülenists faced.

Prosecutors say defendants had contacts with five FETÖ members captured at Akıncı, a military base serving as the command center of the putschists on July 15, 2016.