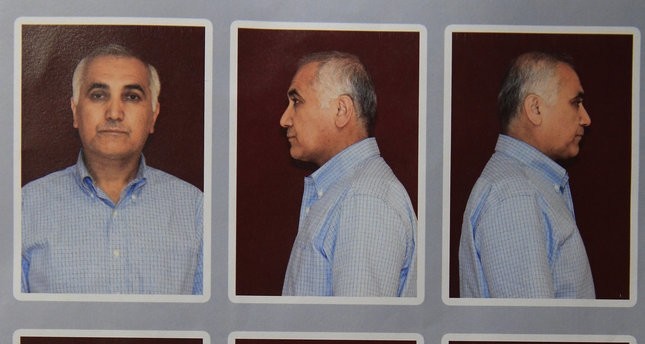 Prosecutors wrapped up an indictment against 28 people are suspected of either negligence or deliberately aiding the release of Adil Öksüz, a senior FETÖ figure who has been accused of masterminding last year’s coup bid. The accused also include an adviser at the Prime Ministry

Almost one year after disappearing, Adil Öksüz, one of Turkey's most wanted men, is back in the spotlight with a new indictment. Prosecutors in Ankara concluded Friday an indictment of 28 people accused of aiding in the release of Öksüz, who allegedly masterminded last year's July 15 coup attempt, which has been blamed on the Gülenist Terror Group (FETÖ).

Öksüz was among the civilians captured at a military base where putschists commanded the bloody attempt that killed 250 people across the country. He was released hours later in a controversial ruling that apparently was based on Öksüz's defense that he was "near the base to look for a piece of land to buy." It was found, based on testimonies of eyewitnesses, that the man, who was a theology lecturer, actually planned the coup with FETÖ's infiltrators in the military in an Ankara villa and received approval from Fetullah Gülen, the U.S.-based leader of the terrorist group.

Thirteen soldiers, 14 national police personnel, including police officers, and an adviser at the Prime Ministry, are among the defendants implicated in the release of Öksüz. The indictment sent to the court for approval says documents regarding Öksüz's connection to the coup attempt were not sent to the court that ordered his release "in time", and the defendants gave him back possessions that should have been treated as criminal evidence without proper investigation. Prosecutors are asking for multiple prison terms for the defendants on charges of aiding FETÖ and destroying evidence.

According to the indictment, Prime Ministry adviser Ali İhsan Sarıkoca visited Öksüz at the police station after his initial detention. Sarıkoca was told Öksüz was in detention by intelligence police officer Serter Koçak, another suspect in the case who "learned Öksüz was a senior imam [the name given to FETÖ's point men]." Koçak is accused of blocking Öksüz's transfer to another police station.

Prosecutors say Alp Aslan, a senior police intelligence officer, did not inform his superiors about Öksüz's status in the terrorist group. Aslan told the prosecutors he did not remember if he was informed about Öksüz's role though other defendants say everyone was aware that Öksüz was a FETÖ imam.

Öksüz was first released from judiciary control by Judge Köksal Çelik. A prosecutor objected to the ruling, but Judge Çetin Sönmez, who took over the case, overruled the objection, citing a lack of evidence against Öksüz. Sönmez later confessed his links to FETÖ during his recent detention. Öksüz has remained at large since July 18 with no leads regarding his whereabouts after he was last seen in his hometown in northwestern Turkey.

Turkey has placed Öksüz in the "red category" of the country's most wanted terror suspects, offering up to TL 4 million ($1.1 million) for tips that lead to his capture. He is believed to have fled abroad as nationwide searches have failed to locate him.

Prosecutors have accused him of orchestrating the meetings of top generals in an Ankara villa where they planned the coup plot based on the testimony of secret witnesses who were also present during the meetings. He faces life imprisonment and a number of additional prison terms for the coup attempt as well as for his membership to a terrorist group. Hakan Biniş, another civilian FETÖ figure, was with Öksüz in the villa during the coup talks, witnesses claimed, along with top generals captured following the coup attempt.

Öksüz has claimed he was near the base to "look for a piece of land he planned to buy" and gave two addresses as his residence during his stay in Ankara after he arrived from the northwestern city of Sakarya where he teaches. The two addresses were found to be houses that have been empty for some time and evidence revealed after his release showed Öksüz never hired a taxi to take him to an area near the base as he had claimed in his initial testimony.

Criminal investigators also revealed he had frequently traveled to the United States where Fetullah Gülen resides, and he was in the company of military officers involved in the coup attempt during his flights. In addition, Öksüz had relatives running companies linked to FETÖ. He was among a few civilians captured in and near the base which was swarming with pro-coup military officers on July 15. Hakan Çiçek, the owner of a private school linked to FETÖ and Kemal Batmaz, a former executive of a FETÖ-linked company, as well as Harun Biniş, who worked as an engineer for FETÖ-linked companies, made up the rest of the odd mix of civilians found at the base. Batmaz is accused of being a co-conspirator of the putsch bid with Öksüz.

Gülen and Öksüz are among the civilians who are being tried in the coup cases that saw the detention and arrests of hundreds of military officers accused of loyalty to FETÖ. Gülen, a former preacher who has been living in Pennsylvania for years, denies the charges. He and Öksüz face multiple life imprisonments for their role in the coup that came three years after the first two coup attempts by FETÖ's infiltrators in the judiciary and law enforcement.