US embassy contact with FETÖ's men in espionage case under spotlight 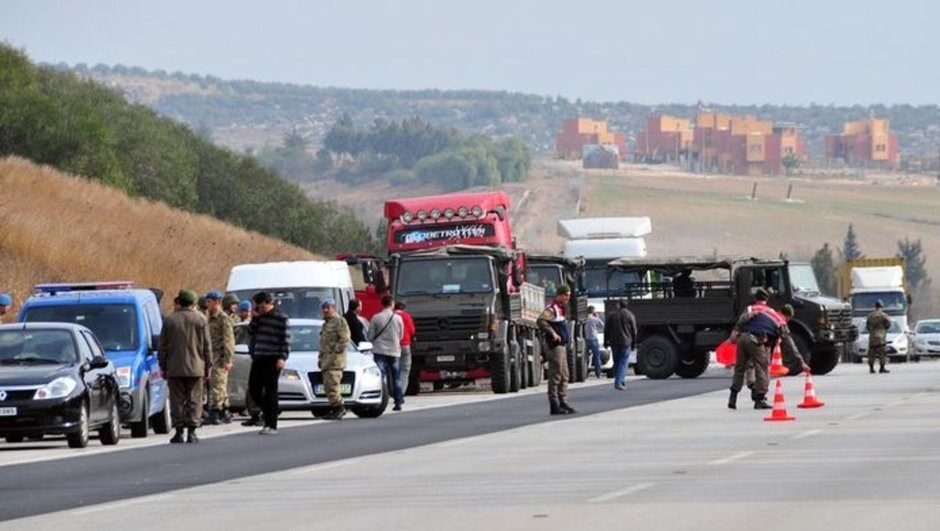 On Jan. 19, 2014, Mu0130T trucks bound for Syria were stopped and searched by FETu00d6-linked officials and the raid in the city of Adana made headlines as FETu00d6 spread photos of the raid publically, despite national security laws forbidding to do so.
by Compiled from Wire Services Jul 05, 2017 12:00 am

The U.S. is once again in the spotlight for an alleged FETÖ plot as a new indictment is filed in the infamous ‘MİT trucks' case regarding the interception of Turkish intelligence operatives in 2014. It revealed new evidence that senior figures in the terror cult blamed for masterminding the raid had repeatedly contacted U.S. diplomatic missions after the incident

According to a new indictment released by Turkish prosecutors Tuesday, two "civilians" from the Gülenist Terror Group (FETÖ) who personally oversaw the raid on trucks belonging to Turkey's National Intelligence Directorate (MİT) in 2014, made multiple phone calls to the U.S. Embassy and the local U.S. consulate just one day after the raid by FETÖ-linked troops and prosecutors. Istanbul's Chief Public Prosecutor İrfan Fidan, who drafted the indictment, said they do not know the content of the calls that were made, as U.S. missions have not yet responded to requests for the phone call recordings.

U.S. missions were closed Tuesday to mark the July 4 Independence Day, a national U.S. holiday, although speculation was rife on social media that they would explain the phone calls away under the auspices of "visa-related issues" as they did in the Adil Öksüz case. Öksüz, currently a fugitive, is accused of masterminding last year's coup attempt with the help of FETÖ infiltrators in the Turkish Armed Forces (TSK) and received a call from the U.S. consulate in Istanbul after he disappeared in the wake of the foiled coup bid that left 250 people dead. In an official statement, U.S. officials said Öksüz, a senior member of the terrorist group led by Gülen who lives in self-imposed exile in the U.S. state of Pennsylvania, had placed a "routine" call to inform him about the cancelation of his U.S. visa.

The indictment says that Gülen - whose extradition is sought from Washington by Ankara for multiple crimes in Turkey - ordered his followers to expose a secret operation by MİT being conducted in southern Turkey. On Jan. 19, 2014, MİT trucks bound for Syria were stopped and searched by FETÖ-linked officials and the raid in the city of Adana made headlines as FETÖ spread photos of the raid publically, despite national security laws forbidding the search of the trucks.

Fidan said a witness who was placed under arrest on suspicion of being a high-level FETÖ member testified that Gülen ordered the plot when he found out about the secret operation, apparently instructing his followers who had infiltrated nearly every institution in Turkey, ranging from law enforcement to the judiciary and police intelligence.

Enis Berberoğlu, a lawmaker for the main opposition Republican People's Party (CHP), and journalists for Turkey's daily Cumhuriyet have been tried and sentenced for revealing state secrets by leaking information and writing about the incident.

The indictment, the fifth in the case, names 55 suspects and ask for multiple life sentences for the suspects who face terror charges.

According to the indictment, Muharrem Gözüküçük and Bayram Andaç telephoned the U.S. Embassy and the U.S. Consulate's office one day after the raid in March 2014. Both men are "civilian imams" for FETÖ, according to prosecutors, a term used to describe FETÖ's point men who commanded the group's infiltrators in the army, police, judiciary and bureaucratic positions. Andaç "organized the raid" and on Jan. 20, he made three phone calls to the said U.S. missions in Turkey. While it is not clear which consulate he called, it is likely that he contacted the consulate in Adana where the raid was executed. Andaç made phone calls again to the consulate on Jan. 21 and Jan. 24. A teacher by profession, Andaç was a high-ranking figure in FETÖ. The other suspect in the indictment, Muharrem Gözüküçük, a civil servant of Turkey's Labor Ministry, was the "handler" of Colonel Erdal Turna, a senior military intelligence officer in Ankara who wiretapped the phones of MİT staff members and uncovered the secret MİT operation. Gözüküçük phoned the U.S. Embassy twice on March 6, 2014, according to the indictment. The calls are highly suspicious as they were made from cellphones used by suspects only after the raid.

İrfan Fidan said in a statement yesterday that the MİT trucks raid was the "joint work of FETÖ and foreign intelligence services," adding that it was "an act against Turkey's national security." Fidan said: "The interception of trucks, leaking of images and videos about the trucks are all part of an international operation serving this purpose. FETÖ sought to put Turkey in a precarious position in the international community by associating it with supporting terrorism," Fidan said. FETÖ-linked media outlets portrayed the raid as so-called evidence that Turkey had supplied arms to terrorists in Syria. Fidan said his office was still investigating to learn who spread the photos and images regarding the trucks.

Last month, a Turkish court sentenced CHP Deputy Enis Berberoğlu to 25 years in jail for his role in leaking secret documents regarding the trucks. Berberoğlu was accused of supplying confidential information regarding the country's intelligence service to two journalists, Can Dündar and Erdem Gül, in the controversial case. The court has ruled that Berberoğlu released documents with the purpose of political or military espionage.

The raid on the trucks sparked outrage in Turkey and the case stunned the nation as it was the first time that the army had explicitly intervened with Turkey's intelligence agency.

It was later revealed that the raid was actually a plot by FETÖ. Two prosecutors who conducted the raid - aided by troops commanded by a general - were arrested and accused of being members of FETÖ. Nearly one-and-a-half years after the case, Dündar and Gül published photos of the raid in 2015, claiming: "Turkey illegally supplied arms to opposition groups in Syria."

The latest indictment, sent to a high criminal court in Istanbul for approval, is the first offering comprehensive insight into FETÖ's role in the case. It says "civilian imams" devised an elaborate scheme for the raid and for about one month before the raid, they contacted each participant via cellphone lines bought exclusively for private communication. The defendants include former military officers including a brigadier general, a former MİT official, five teachers - who acted as FETÖ 's point men - and other suspects from the public sector who played roles in organizing the raid and its aftermath. FETÖ is known for employing seemingly ordinary members from low-profile jobs to coordinate its infiltrators in the army, judiciary and law enforcement. Ten defendants in the case - all "civilian imams" - remain at large while one suspect has been arrested.

A testimony from an unidentified witness in the case indicates that he was personally ordered by Gülen to carry out activities for the cult during a meeting with the retired preacher in Pennsylvania. "He told me to do everything, to record the video and photos of the raid and to have newspapers and websites fill their pages with the photos," the witness said, according to the indictment.

FETÖ, which posed as a religious charity movement for years before it openly tried to seize power in Turkey with three coup plots in 2013 and 2016, found a safe haven in the U.S. after Gülen moved there in 1999. Following last year's coup attempt, Turkey sped up efforts for his extradition. Gülen, who was already implicated in multiple cases regarding the wrongdoings of his group - from illegal wiretapping to orchestrating sham trials - faces life imprisonment in several cases regarding FETÖ.

Turkey, which has been a close ally of the U.S. since World War II, questioned Washington's "sincerity" after the phone call to Adil Öksüz from a U.S. Consulate number was revealed a few months ago. After the U.S. Embassy said in a statement that the call was to provide information about the denial of Öksüz's visa application, Ankara urged Washington to "display sincerity in the case and deny visas to everyone linked to the terrorist group."

Öksüz, a theology lecturer tied to the group, was discovered by investigators to be the planner of the putsch bid, which saw infiltrators from FETÖ in the military attempt to topple the government and kill the president. Öksüz was a frequent traveler to the U.S., where he met with FETÖ leader Gülen according to investigators - but his visa to that country was suddenly scrapped after the putsch bid.

"I didn't buy it," Prime Minister Binali Yıldırım said about the U.S. statement regarding the phone call to Öksüz. "There should be more to it. Was it really their priority to make that call? We need a more satisfying answer," he said in a recent televised interview.

Justice Minister Bekir Bozdağ, whose Ministry handles extradition requests for fugitive members of FETÖ, said yesterday in an interview with A Haber TV that the U.S. should display "sincerity" on the matter. "It is not about Adil Öksüz only. Many FETÖ members, including its leader, are in the U.S. and every single of them were granted visas. The U.S. should cancel their visas so that we will be assured that they sincerely cooperate with us [against FETÖ]," he said. "Hundreds of FETÖ members are in the U.S. and we wonder why they did not cancel their visas or their residence permits. The founder and leader of FETÖ freely continues his activities in the U.S. without any restrictions. Turkey expects sensitivity and sincerity from the U.S. on the matter but we have never received it," Justice Minister Bozdağ said after the Adil Öksüz incident. Criminal investigators have revealed that Öksüz, who was captured at the command base of the putschists after the July 15 coup attempt, frequently traveled to the U.S. and he was in the company of military officers involved in the coup attempt during his flights.