Generals appear before court in Ankara for coup attempt 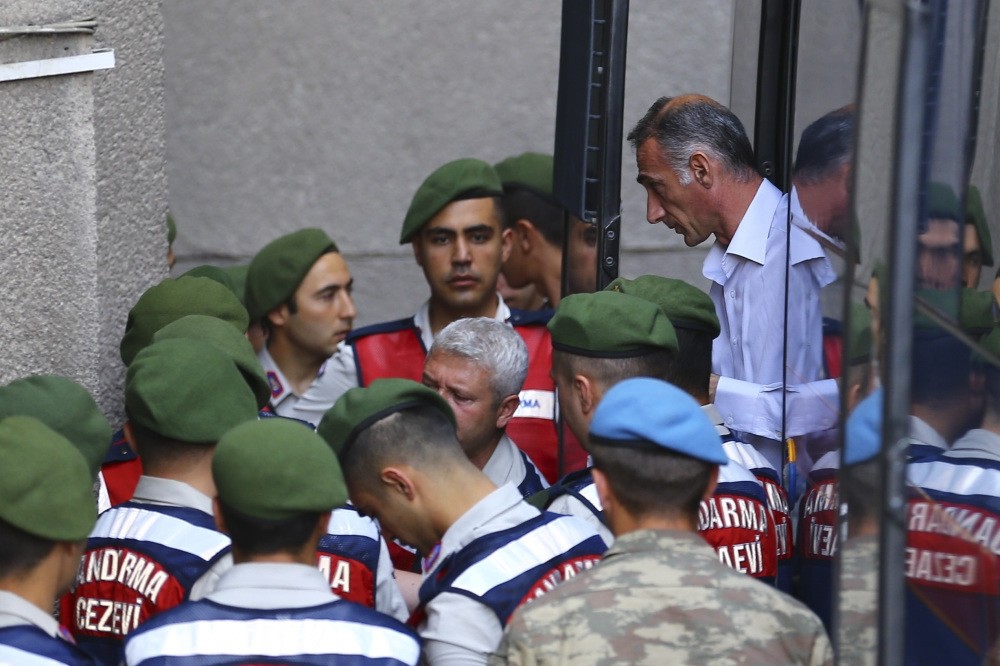 Gendarmerie troops escort the defendants to the courtroom.
by Daily Sabah Jul 07, 2017 12:00 am

A new trial related to the July 15 coup bid last year, blamed on FETÖ, started yesterday in Ankara. Nearly 150 defendants including generals are accused of executing the coup bid at the Land Forces Command and face life imprisonment for their role in the putsch attempt

The latest trial regarding last year's coup attempt blamed on the followers of the Gülenist Terror Group (FETÖ) in the army began in the capital city of Ankara yesterday. A total of 150 defendants are accused of attempting to capture the Land Forces Command of the army on July 15, 2016 when putschists moved to seize strategic locations and kill the country's elected leaders. Yıldırım Güvenç and Erhan Caha, two generals who commanded the logistics and capacity building departments at the Land Forces are among the defendants. Caha's name was on the list of 38 members of the Peace At Home Council of the putschists. All defendants face three instances of aggravated life imprisonment on coup charges.

Under tight security measures, 108 defendants were accompanied to the courtroom at the 19th High Criminal Court, flanked by gendarmerie troops. The rest of the defendants will testify via videolink from Sincan prison, where they have been held since their capture in the immediate aftermath of the coup bid that killed 250 people.

The hearings will continue for 17 weekdays, the judges announced, and the defendants were yet to testify when Daily Sabah went to print.

An indictment of the defendants says the suspects "waited" to take over the Land Forces headquarters after the military staff not linked to FETÖ left the place at the end of the workday. All FETÖ-linked officers who were on their day off were summoned to the headquarters by the putschists to aid in the coup attempt, the indictment says. Around 9 p.m. on July 15, pro-coup troops started rounding up any military personnel not joining them and duct-taped their hands and legs. By 10 p.m., the headquarters were entirely seized by the putschists.

The suspects then barricaded themselves inside when the public started pouring onto the streets to confront the putschists upon calls by President Recep Tayyip Erdoğan, who himself escaped an assassination attempt that night. When the public resistance and efforts by anti-coup military and police officers quashed the coup attempt across the country, the defendants changed their uniforms for civilian clothes and fled. A small number of pro-coup troops were captured inside the headquarters in the early hours of July 16.

Land Forces Commander Gen. Salih Zeki Çolak was at the General Staff headquarters during the coup attempt and was held hostage by pro-coup troops invading the Office of the Chief of the General Staff.

Following the coup attempt, hundreds of military officers accused of involvement were detained and their trials began last December.

Fetullah Gülen, the U.S.-based leader of FETÖ, is the prime suspect in all trials and faces aggravated life imprisonment for his role in masterminding the coup attempt. Prosecutors say Adil Öksüz, a fugitive FETÖ member who was briefly detained when he was captured at Akıncı military base in Ankara, plotted the coup with FETÖ infiltrators in the army, and they executed the coup after Gülen approved it.

In the coup trials, most of the defendants, despite mounting evidence showing their involvement, deny the charges brought before them in the courts. FETÖ planted its men and women in every institution, ranging from the army to law enforcement, for decades before it openly declared war against the Turkish state and waged two coup attempts in 2013. Disguised with code names and accused of using secretive methods of correspondence and a distinct secular lifestyle worlds away from what FETÖ promotes as a religious life, its members infiltrated positions in key institutions that they ultimately sought to take over. The group's leader denies the allegations, although an investigation shows intricate ties between "civilian" Gülenists and FETÖ's alleged infiltrators.