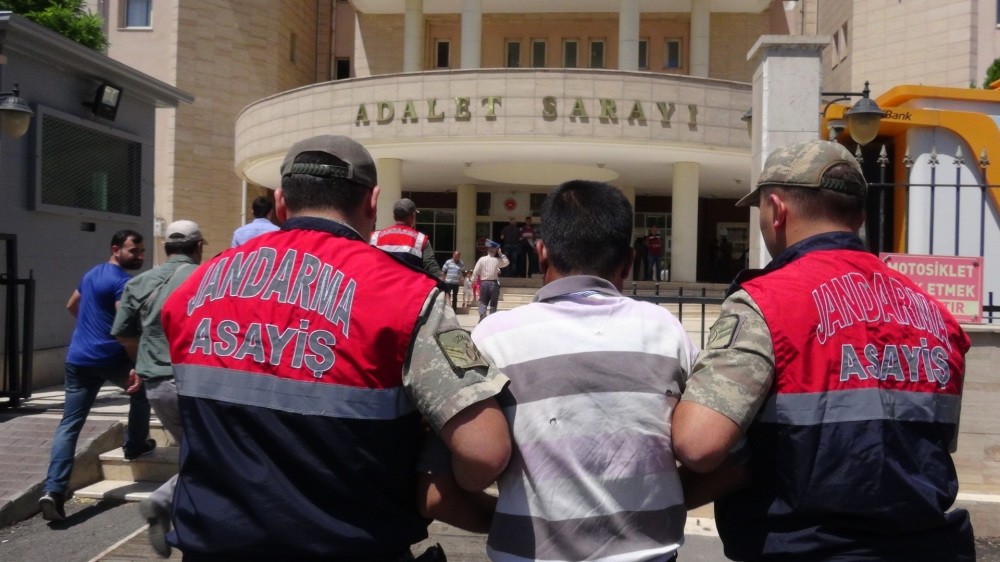 Gendarmerie officers escort M.M. to the courthouse in u015eanlu0131urfa. Daesh militant was captured in the province after infiltrating into Turkey from Syria.
by Daily Sabah Jul 08, 2017 12:00 am

Security forces detained 29 Daesh militants in Istanbul and one in Şanlıurfa on Friday in the latest raids targeting the terrorist group. The suspects who were allegedly planning attacks, included foreigners and locals

Daesh became one of the most active terrorist groups in Turkey over a span of just two years. In response, the group faced fresh crackdowns through operations in Istanbul and the southeastern city of Şanlıurfa that netted 30 suspects.

Early Friday, counterterrorism police raided apartments in Istanbul, detaining 22 foreigners and seven Turkish nationals. A number of the suspects captured are accused of plotting "sensational attacks", according to Turkish media outlets, while some were planning to travel to Syria where the group has a sizable presence. The nationalities of those captured in the operations have yet to be disclosed. The authorities also seized several electronic devices and one gun in the raid. Police sources speaking to media said the suspects were members of a sleeper cell and that some had fought for Daesh before.

In the Ceylanpınar district of the southeastern city of Şanlıurfa, gendarmerie troops captured a Syrian Daesh suspect on Friday. The suspect, identified as M.M., was among three Daesh members who had crossed the Turkish border from Ras al-Ayn, Syria, also known as Serekani, into the Ceylanpınar district. Meanwhile, two other militants were captured in an operation last Monday.

On Wednesday, security forces detained six people in Kayseri and Kocaeli provinces on charges of plotting an attack on main opposition Republican People's Party (CHP) Chairman Kemal Kılıçdaroğlu's protest march in Kocaeli. A total of 37 others were detained the same day in separate operations against Daesh members across the country.

Daesh has been blamed for a string of attacks in Turkey, ranging from suicide bombings to gun attacks. In January, a lone Daesh gunman stormed a popular nightclub in Istanbul where he killed 39 people during New Year's Eve celebrations. The gunman was apprehended a few weeks later. Turkey is one of Daesh's many enemies. The group emerged in Iraq and Syria, both of which share a border with Turkey. Turkey is also tackling an influx of foreign fighters looking to sneak into Syria and Iraq where Daesh controls towns and large swathes of territory. Since the terrorist group's emergence, Turkey has detained over 5,000 suspects and launched Operation Euphrates Shield last year to back Syrian opposition groups fighting Daesh in Syria. The operation, which took place from August 2016 to April 2017, saw the liberation of the Syrian towns of Jarablus, al-Rai, Dabiq and al-Bab from Daesh control.

The country has deported over 5,000 Daesh suspects, President Recep Tayyip Erdoğan said Wednesday. The president said that Turkey also prohibited the entry of over 53,000 terrorist suspects and destroyed Daesh terrorists along the border, allowing 100,000 Syrians to return to their homes. "With Operation Euphrates Shield, we killed over 3,000 Daesh terrorists [in northern Syria]," Erdoğan said.