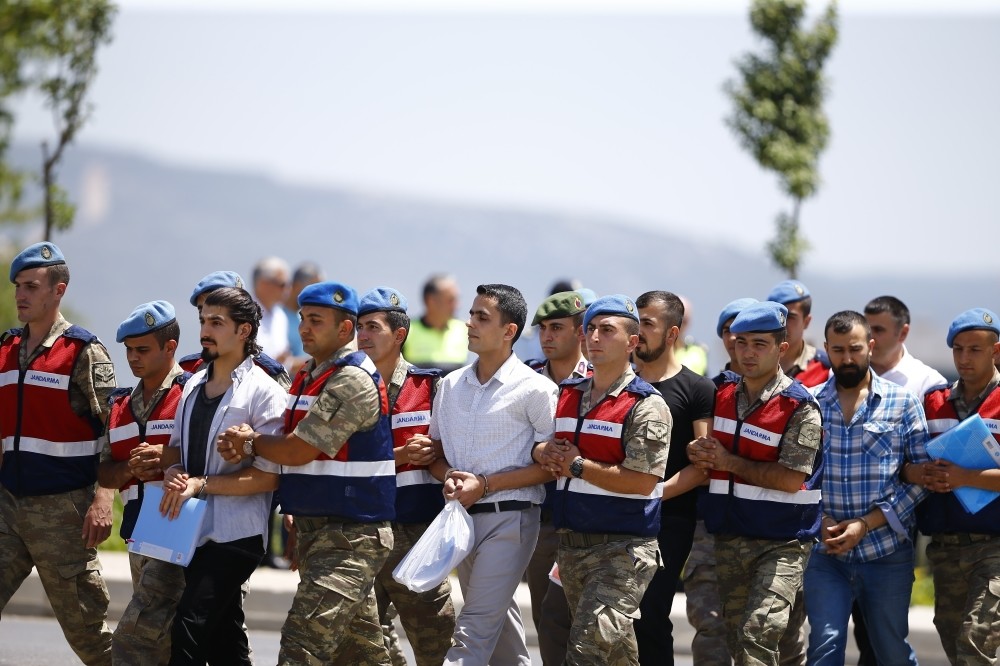 Gendarmerie troops escort defendants to the courtroom in Muu011fla for a trial on the assassination attempt of President Recep Tayyip Erdou011fan.
by Daily Sabah Jul 18, 2017 12:00 am

A new week of trials for last year's coup attempt blamed on FETÖ kicked off yesterday. The first hearing of an attempt by putschists to take over a private TV station and the new hearing on an attempt by pro-coup troops to kill President Erdoğan on July 15 are underway

Two trials are in the spotlight as Turkey continues trying those accused of carrying out the July 15, 2016 coup attempt blamed on army infiltrators from the Gülenist Terror Group (FETÖ). In the southwestern city of Muğla, 44 defendants are being tried for their bid to assassinate President Recep Tayyip Erdoğan during the putsch bid. In Istanbul, the first hearing opened on an attempted takeover of Doğan Media Center, which houses the eponymous media conglomerate's TV stations, including CNN Turk. The trial in Muğla, where Erdoğan was on holiday with his family, has received extra media attention due to recent controversy over the defendants' outfits and the constant tension between the defendants, judges and plaintiffs.

Last week, Gökhan Güçlü, a soldier among the would-be assassins sent to take out Erdoğan, made the headlines when he wore a T-shirt reading "Hero" to the hearing. Güçlü was returned to jail after causing tension in the courtroom, while other defendants were forced into the courtroom by security staff when they refused to leave the prison van. During yesterday's third hearing, Capt. Haldun Gülmez refused to leave the prison van to enter the courtroom. The escorting gendarmerie troops forcibly removed Gülmez from the van and pushed him into the courtroom.

Gülmez was removed from the courtroom in last week's hearing for causing "disorder." The former officer is accused of firing on police officers near Erdoğan's hotel from a military helicopter on the night of the coup. After his capture, police found a paper with a prayer from Fetullah Gülen, the leader of FETÖ, in his possession.

Gülen is a prime suspect in the assassination case, while one pro-coup troop remains at large. The suspects face six instances of aggravated life imprisonment.

Two teams of pro-coup troops were dispatched to Marmaris in an attempt to kill Erdoğan at the vacation resort where he was staying. Their mission failed when Erdoğan fled after being informed that a coup attempt was unfolding, but the putschists killed the police officers guarding the hotel before fleeing.

All members of the assassination team except one were captured while hiding in the countryside near Marmaris in the days following the coup. The indictment against the soldiers says Gülen, the elusive FETÖ leader, had personally approved the plan to capture or assassinate Erdoğan during the putsch attempt, as he did for the other coup plans. Gülen is also believed to have ordered the seizure of strategic locations from the presidential complex to army headquarters. He currently resides in Pennsylvania, and Turkey is seeking his extradition from the U.S.

All defendants in the trial denied that they were sent by coup leaders to kill Erdoğan, although some admitted they knew their mission was to capture Erdoğan alive. Brig. Gen. Gökhan Şahin Sönmezateş, accused of organizing the mission, is the only suspect openly admitting to a coup attempt, both in this case and in all coup trials across Turkey.

Most suspects, both in the Muğla trial and other trials, say they were persuaded or ordered to join the "operations" they believed to be against terrorists. Lawyers for the plaintiffs say the defendants are seeking to prolong the trials as FETÖ nowadays "instills the hope of liberation" for its jailed members through social media messages and messages smuggled into prisons.

In Istanbul, 19 defendants appeared before a court yesterday for a raid in Doğan Media Center in the city's Bağcılar district during July 15 coup attempt. The sprawling complex is home to Kanal D, the Turkish affiliate of CNN, Hürriyet newspaper and other media outlets owned by the Doğan media conglomerate.

One person was killed and several were injured when pro-coup troops tried to seize the building and cut off broadcasts. When a crowd of unarmed civilians, including off-duty Doğan staff, confronted the soldiers and anti-coup police officers arrived at the scene, the putschists surrendered.

Former Capt. Mehmet Akif Aslan was the first to testify in yesterday's hearing and claimed he would not present his defense as he was "not delivered the indictment." The hearing was underway when Daily Sabah went to print. The suspects face life imprisonment if found guilty.

Prosecutors say former Col. Ahmet Zeki Gerehan, who is also implicated in other coup trials in Istanbul, ordered the defendants to "evacuate" Doğan Media Center and cut off TV broadcasts. Officers accompanied by 14 conscripts then flew to the building by helicopter.

Putschists had tried to seize national TV stations and public broadcaster Turkish Radio and Television Corporation (TRT) in Istanbul during the coup bid. The headquarters of Turkuvaz Medya, the parent company of Daily Sabah, also received damage from gunshots fired by troops but civilians assembled outside the building to protect it from putschists managed to deter pro-coup troops from taking over the building. In related news, 198 defendants went on a trial in an Istanbul court yesterday for commanding infiltrators of the terrorist group in law enforcement. The so-called "secret imams," point men for the group, are accused of running secret sleeper cells of police officers loyal to the terrorist group.