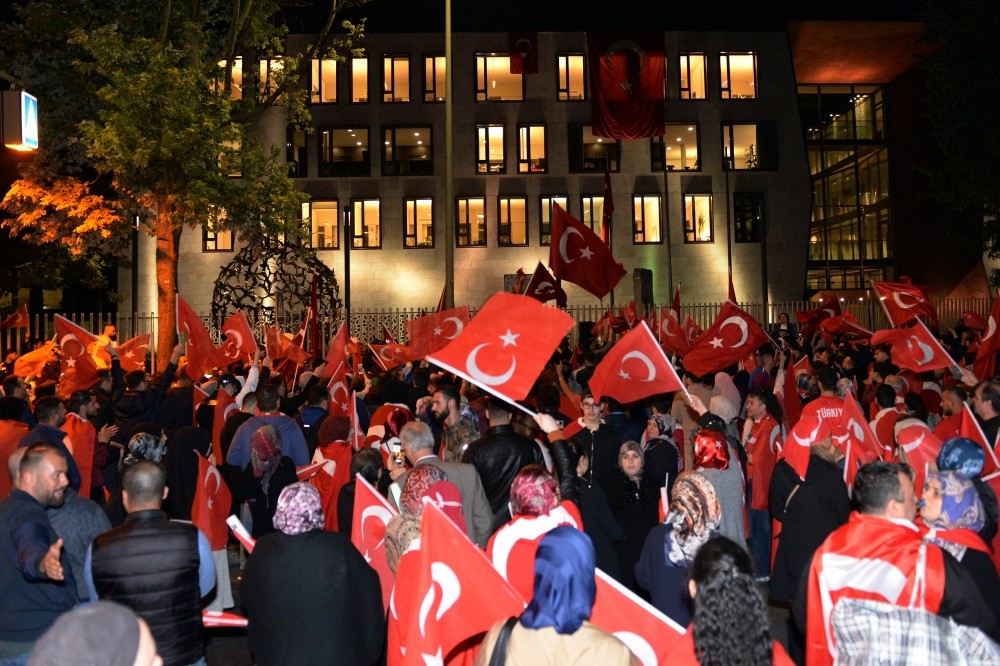 Turkish citizens at a pro-democracy rally outside Berlin embassy to mark the first anniversary of July 15 coup attempt. Germany is accused of harboring suspects involved in the bid.
by Daily Sabah Jul 21, 2017 12:00 am

A FETÖ representative in Germany says the group, which is accused of launching July 15 coup attempt in Turkey, sees the European country as ‘new center', as many linked to the terrorist group have found shelter in Germany

A senior figure of the Gülenist Terror Group (FETÖ) - accused of masterminding the bloody coup attempt in Turkey last year - has told the German media that Germany will become "a new center" for the group.

Ercan Karakoyun who heads the Foundation for Dialogue and Education, a prominent FETÖ-linked organization operating in Germany, told German weekly Die Zeit during an interview that "The [Gülen] movement cannot survive in Turkey."

FETÖ members refer to their group as the "Hizmet [Service] Movement," claiming their work is solely focused on education and charity. However, hundreds of military officers, prosecutors, judges and bureaucrats in Turkey have been accused of working for FETÖ in order to seize power. A large number of the group's members have fled abroad since the coup attempt in Turkey was quelled, many of whom are now wanted on charges related to the deaths of 249 people who were killed during the coup attempt. The suspects are accused of actively aiding the terrorist group. Karakoyun told Die Zeit that the group has a significant presence in Germany, adding that new arrivals "will be as active there as they were in Turkey."

Founded by U.S.-based fugitive preacher Fetullah Gülen, FETÖ has been implicated in a wide range of crimes, including fraud, illegal wiretapping, blackmail, extortion, forgery and sham trials. The controversial group first tried to topple the Turkish government in 2013 with two coup attempts plotted by infiltrators within law enforcement and the judiciary. When these attempts failed, Gülenist infiltrators in the ranks of the Turkish Armed Forces (TSK), from noncommissioned officers to generals, carried out the putsch bid. A strong public resistance derailed their plans to capture strategic locations and thwarted their attempts to kill the country's top leaders. Most senior figures of the terrorist group fled abroad in the wake of the coup while others, including FETÖ-linked officers, are believed to be in hiding in Germany while others took shelter in the U.S. and other countries.

Germany has granted political asylum to a number of Turkish military personnel and their families who hold diplomatic passports and have suspected links to the FETÖ, according to some German media outlets.

In the wake of the deadly coup attempt on July 15, Turkey has worked tirelessly to locate FETÖ members worldwide, focusing on the group's commercial entities. A number of European countries, accused by Ankara of harboring supporters of other terrorist groups, have failed to respond to Turkey's requests for extradition, unlike Arab and Asian countries that have granted Ankara's extradition requests.

Germany is being singled out among European countries for embracing some 250 fugitive diplomats and soldiers accused of involvement in the coup. The U.S. is the second most preferred destination of Gülenists fleeing their native Turkey, where the terrorist group's leader Gülen lives on a posh, sprawling retreat in Saylorsburg, Pennsylvania. The terrorist group runs dozens of charter schools and companies across the U.S.

Ankara has vowed to bring all FETÖ suspects to justice in the aftermath of the coup attempt that laid bare just how desperate the terrorist group was to seize power in the face of a government crackdown in Turkey.

In May, Ankara condemned Berlin's decision to accept the asylum applications of former military personnel linked to the terrorist group. In a statement, the Turkish Foreign Ministry said that Germany has shown disregard for democratic principles by welcoming coup perpetrators, having "regretfully condemned" Berlin's decision to grant the asylum requests of Gülenists fleeing the country.

Saying that the recent development puts bilateral relations with Germany at risk, the statement also indicated that "Germany"s decision [to welcome coup perpetrators] despite all evidence proving their links to FETÖ contradicts the spirit of alliance and damages multidimensional relations." The Ministry urged Germany to review its decision, which contradicts the cooperative bilateral efforts in the fields of defense and security. It also added that the country should support Turkey's struggle against FETÖ and other terrorist groups.