Trial into Cumhuriyet daily over terror charges begins in Istanbul 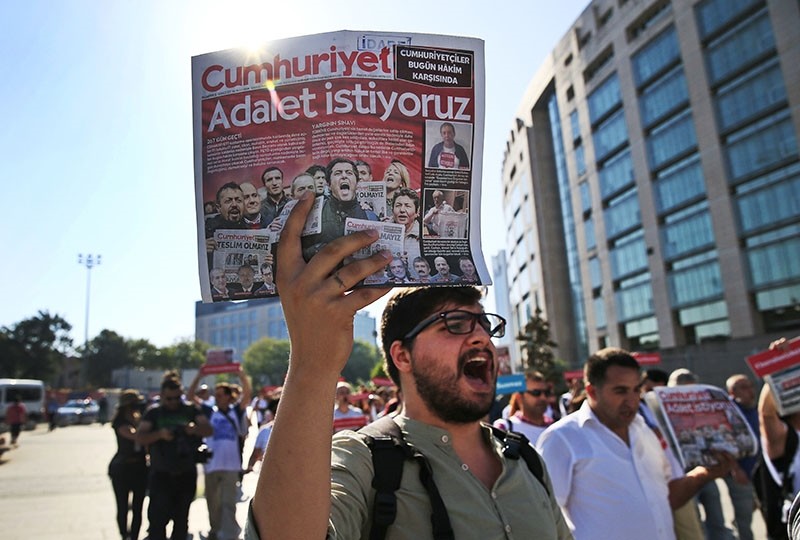 Activists, one holding today's copy of the Cumhuriyet newspaper, march to the court in Istanbul, Monday, July 24, 2017. The newspaper headline reads in Turkish: ,We want justice., (AP Photo)
by Daily Sabah with Agencies Jul 24, 2017 12:00 am

The first hearing in the case of 17 executives and journalists from the Cumhuriyet newspaper accused of aiding a terrorist group opened in an Istanbul court yesterday. The defendants are accused of helping spread propaganda of the Gülenist Terror Group (FETÖ), which the government blames for last year's bloody coup attempt on July 15 and other terrorism-related offenses. Two of the suspects are on the run, 11 of them have been arrested and six others have been released pending trial.

Prosecutors' 324-page indictment claims Cumhuriyet was effectively taken over by the Gülenist Terror Group (FETÖ) led by the U.S.-based Fetullah Gülen and used to "veil the actions of terrorist groups." The newspaper and the suspects have denied the accusations.

The majority of evidence in the indictment comes from social media posts, along with allegations that staff had been in contact with users of Bylock, an encrypted messaging app the government says FETÖ members used.

The former editor-in-chief of the daily, Can Dündar, was named as the prime suspect in the indictment prepared by the Istanbul Chief Public Prosecutor's Office. Dündar, who is also among the suspects of the espionage case related to publishing confidential footage in the controversial 2014 MİT trucks raid, in being tried in absentia as he fled to Germany.

Prosecutors are seeking between 7.5 and 15 years in prison for Dündar, editor-in-chief Murat Sabuncu, IPI Board Member Kadri Gürsel, Aydın Engin, Bülent Yener and Günseli Özaltay for "helping an armed terrorist organization while not being a member."

Kadri Gürsel was the first to present his defense at yesterday's hearing. Gürsel denied any ties with FETÖ members and said he simply contacted fellow journalists Mehmet Altan and Mümtazer Türköne, who are both in prison on terrorism charges in another FETÖ-related lawsuit, to express condolences for the death of Altan's father and to wish "a speedy recovery" to imprisoned Türköne. He acknowledged that he knew the eight people he is accused of contacting in the indictment but denied being aware that those people used the ByLock app. He also denied charges that he tried to change Cumhuriyet's publishing policy in a way that would serve the interests of terrorist groups, saying that he only did a brief stint with the newspaper and it would be impossible to "do that in such a short span of time." Gürsel asked the court to release him.

Sabuncu and other senior staff have been in pre-trial detention since being arrested in November.

CEO of the daily Akın Atalay, Mehmet Orhan Erinç and Önder Çelik are charged with "helping an armed terrorist organization while not being a member" and "abusing trust," with the prosecutor demanding between 11.5 and 43 years in jail for them.

During his defense, Atalay denied the charges directed against the newspaper, noting that the prosecutor who launched the lawsuit of Cumhuriyet's FETÖ ties is himself a suspect in a FETÖ case and faces life imprisonment.

Between 9.5 and 29 years in jail is demanded for Bülent Utku, caricaturist Musa Kart, Hakan Karasinir, Mustafa Kemal Güngör and Hikmet Aslan Çetinkaya on the same charges as those directed at Atalay, Erinç and Çelik.

In addition, the prosecutor sought between 7.5 and 15 years in prison for journalist Ahmet Şık for "helping and being a member of the PKK and the Revolutionary People's Liberation Party-Front (DHKP-C)." Şık is the author of the book İmamın Ordusu (The Imam's Army) that revealed FETÖ structure within the state, which was used as evidence in various coup-plot investigations. He was also arrested as one of the suspects during sham Ergenekon coup plot trials launched by FETÖ-linked prosecutors using illegally gathered evidence.

In a dramatic encounter, the trial coincides with Turkey's Press Day celebrated on July 24, which marks the end of official censorship in the Ottoman Empire in 1908 under Sultan Abdülhamid II.

Founded in 1924, Cumhuriyet (Republic) is the oldest newspaper in Turkey that is still in business, and is considered among the flagships of the Turkish press.

The daily had long followed a secular and left-wing republican editorial policy with a nationalistic tone in various periods. However, in latest years, the paper drew reactions from its usual reader base for adopting a more pro-Kurdish tone, often supporting the pro-PKK Peoples' Democratic Party (HDP).

Cumhuriyet has been among the leading opposition papers since the Justice and Development Party (AK Party) came to power in 2002.