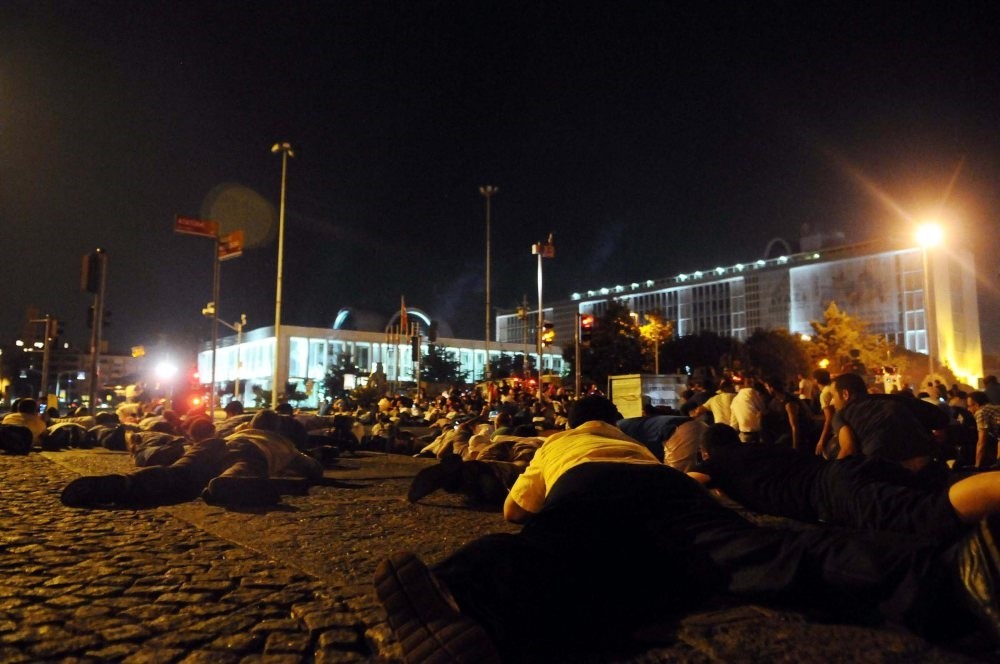 People take cover after soldiers open fire on an anti-coup crowd outside the Istanbul municipality building on July 15, 2016.
by Daily Sabah Jul 25, 2017 12:00 am

The building that houses the Istanbul municipality was one of the deadliest locations for unarmed civilians confronting putschist soldiers during last year's foiled coup attempt on July 15. It was there that 14 people were mowed down by gunfire from soldiers linked to the Gülenist Terror Group (FETÖ). More than a year after the coup attempt, prosecutors wrapped up an indictment for 50 soldiers involved in the violent takeover of the municipality. The prosecutors are asking for three aggravated life sentences for the suspects.

A colonel, three captains and officers with lower ranks as well as conscripts commanded by the officers are among the defendants. The prosecutors say troops fired on a crowd accompanying police officers trying to stop the takeover of the municipality and, in addition to the fatalities, 152 people were injured. The indictment details how the putschists mobilized low-ranking officers attending courses for a promotion to staff ranks in order to carry out the coup attempt that killed 249 people all across the country.

Professor İlhan Varank, the brother of President Recep Tayyip Erdoğan's chief adviser Mustafa Varank, was among the civilians killed by putschists when they flocked to the municipality upon a call by the president that urged the public to confront the troops. Hundreds had gathered near the municipality building in the Saraçhane neighborhood, shouting "soldiers, surrender" before marching to the building where soldiers began firing on the marching crowd.

Prosecutors singled out two captains identified as Ömer Faruk Nazlıcan and Cihan Şahin as well as conscript Emrah Akbulut as the suspects responsible for the most deaths when they indiscriminately fired on the crowd. Police officers in the crowd returned fire, killing three soldiers. The tense confrontation between the soldiers and the public came to an end when police wrestled control of the building from the putschists, who surrendered in the early hours of July 16 when the coup attempt had failed.

More than 50,000 people have been imprisoned in Turkey for suspected links to the failed coup attempt. Hundreds have been arrested and arrest warrants have been issued out for more than 8,000 people.

Fetullah Gülen is the prime suspect in the coup attempt and faces life imprisonment if extradited to Turkey, which Ankara has requested from Washington. Prosecutors say Adil Öksüz, a fugitive FETÖ member who was briefly detained when he was captured at Akıncı Air Base in Ankara, plotted the coup with FETÖ infiltrators in the Turkish Armed Forces (TSK) and executed the putsch after Gülen approved it.

In Istanbul, troops had seized the Bosporus Bridge - now renamed the July 15 Martyrs Bridge in memory of the people who died confronting the putschists - and tried to seize a number of other strategic and symbolic locations, including the governorate and the headquarters of the public broadcaster. When Istanbulites learned of the coup attempt and on calls from the president and prime minister to "reclaim" the streets from the putschists, hundreds poured into the streets. The municipality was one of the flashpoint areas with one of the highest fatalities during the coup while the putschists also killed 34 people on the Bosporus Bridge.

No date has been set yet for the trial of those accused of taking over the municipality. Coup trials started last year and only a few were concluded with the defendants being sentenced to life imprisonment. A number of trials are already underway in Istanbul for incidents related to the coup, such as the takeover of the governorate.