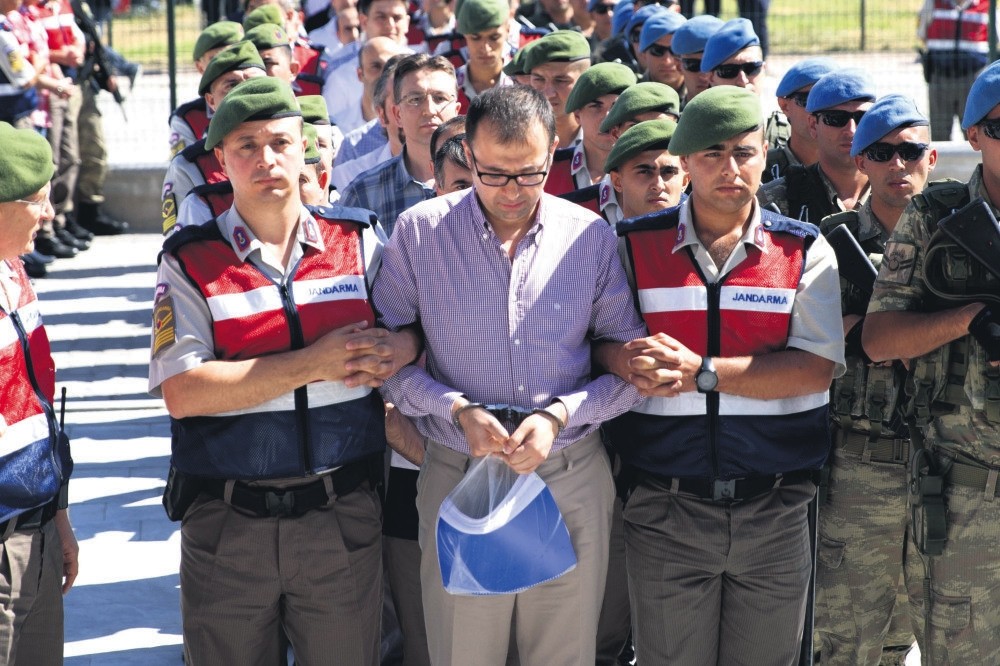 Gendarmeries escort Hakan u00c7iu00e7ek to the courthouse. u00c7iu00e7ek, the owner of a college once controlled by FETu00d6, is accused of coordinating the terrorist group's infiltrators in the military who rose in the ranks to staff officers.
by Daily Sabah Aug 04, 2017 12:00 am

In a key trial of the July 15 coup attempt, defendants accused of commanding coup forces loyal to FETÖ have denied and lied, parroting the defense of putschist ringleader and point man Hakan Çiçek, who blames ‘coincidences' for his alleged role

What are the odds that five men with intricate ties to one terrorist group would be inside the same military base where pro-coup generals coordinated a coup attempt at the same time? This is what an Ankara court seeks to find out. Despite mounting evidence against the coup plotters, the defendants in the case have strictly maintained their innocence. Among the 486 defendants in what is the biggest trial of the July 15, 2016 coup attempt blamed on the Gülenist Terror Group (FETÖ), Hakan Çiçek, apparently failed to provide a straight answer to the said question in an Ankara courtroom.

Like another defendants before him in the trial that began earlier this week, Çiçek, who is accused of commanding staff officers that infiltrated the army for FETÖ, denied his ties to the terrorist group, saying he found himself caught in the middle of the coup attempt due to "coincidences."

As the owner of a private college allegedly controlled by FETÖ which runs an international network of schools under different names worldwide, Çiçek was detained at Akıncı, the military base where pro-coup generals gathered on July 15 and where fighter jets were deployed to launch airstrikes targeting anyone who opposed the putsch attempt.

Çiçek said he had gone to the Akıncı military base upon the invitation of former Colonel Ahmet Özçetin, who has since been jailed for his involvement in the coup attempt. According to Akıncı, he was invited to the military base by Col. Özçetin, whose child was attending the school owned by Çiçek and who had invited him to "a party" on the base, where he said he aimed to promote his school to other officers with children. Özçetin has denied that he invited Çiçek to Akıncı. Meanwhile, Çiçek said he tried to leave the base when he noticed "incidents" occur, in reference to a crowd that had gathered outside the base to confront the putschists. According to Çiçek, upon learning that the coup was underway, he spent hours in hiding on the military base before eventually sneaking off the premises in the early hours of July 16, 2016. He said he stumbled upon a gendarmerie patrol unit outside and was taken to their base for questioning, where he was subsequently detained. When Çiçek was caught, the gendarmerie discovered more than $23,000 on the man. He later told the court that he had "found" the money in a bag in a field where he was walking near the military base.

Çiçek denies accusations that he was a user of the encrypted messaging app exclusively used by FETÖ members known as Bylock, claiming he had no links whatsoever to the terrorist group.

According to the indictment in the case, Çiçek actively recruited army cadets to join the terrorist group which is known for its mass infiltration into branches of the military, law enforcement and the judiciary. He is accused of controlling the infiltrators who rose to the rank of staff officers and from captains to colonels. Although Çiçek denies meeting with anyone at the military base, his brother is among the military officers involved in the coup attempt at Akıncı. Investigators also discovered tangible links between Çiçek and a string of high-profile FETÖ suspects; namely, evidence of meetings and phone contact with Hıdayet Karaca - the head of the FETÖ-owned media group - and İlhan İşbilen, a former lawmaker jailed for his links to FETÖ. Çiçek claims these links were merely for business purposes and argues that he never met FETÖ leader Fetullah Gülen.

Hakan Çiçek also said he "didn't know" why his phone number was in a WhatsApp group used by officers coordinating the coup.

When judges asked him how he had come by the contact information of all the senior figures of the terrorist group, he said the contacts were simply for business matters. Claiming that it was "a coincidence" that the contacts were FETÖ members. He said he "didn't know" that Muaz Güngören, a suspect accused of running FETÖ's affairs in Saudi Arabia, was linked to the terrorist group, despite acknowledging that Güngören wired him $6.7 million "for a business transaction."

Since coup trials began in Turkey last year, hundreds of officers, from lieutenants to generals, have been put on trial for the putsch bid. So far, only a few defendants have acknowledged their links to FETÖ, despite abundant evidence of meetings with the group's members.

The majority of defendants have also avoided naming FETÖ as being behind the coup. The plaintiffs' lawyers say this is a defense strategy to vindicate the terrorist group, hoping that FETÖ will eventually "liberate" them from prison.

Kemal Batmaz, who was the first defendant to testify in the trial on Tuesday, claimed he was not the person seen in security camera footage inside the military base, although the high-definition footage and forensic evidence clearly shows Batmaz casually walking inside the military base. Batmaz, who was captured near the base in the early hours of July 16, even claimed he did not "go to the base" on the night of the coup. He is accused of running the coup plot alongside Adil Öksüz, a fugitive theology lecturer who served as Fetullah Gülen's point man in planning the coup attempt with pro-coup generals.

The suspects in the case are accused of commanding the coup plot from the Akıncı air base where fighter jets and helicopters took off to strike strategic locations, including Parliament and places where anti-coup crowds had gathered. All defendants face life imprisonment for plotting to overthrow the government and for plots to kill the country's leaders.

Along with Gülen, Öksüz, Batmaz and Çiçek, Harun Biniş and Nurettin Oruç are two "civilian" defendants named in the case. Biniş, a former executive of a FETÖ-linked company, was captured near the Akıncı base with Kemal Batmaz while Nurettin Oruç, a filmmaker, was captured alone.

The 461 suspects were arrested in connection with incidents at the Akıncı base when the coup bid was foiled thanks to a strong, unprecedented public resistance that cost the lives of 249 people who confronted the putschists. Seven people, including Gülen and Öksüz, remain at large. Öksüz disappeared after he was released in a controversial ruling by a local court immediately after the coup bid, while Gülen refuses to return to Turkey from Pennsylvania where he has been living for years. The remaining have been released pending trial.

The majority of defendants are soldiers, including former Air Force Commander Gen. Akın Öztürk. Öztürk is accused of heading the Peace At Home Council of pro-coup soldiers and was captured at Akıncı during the coup bid. In a separate trial over the coup attempt, he claimed that he simply visited the base to see his grandchildren. His son-in-law, Hakan Karakuş, is among the military officers who participated in the coup attempt and is accused of commanding a fighter jet that carried out airstrikes targeting anti-coup crowds.

The trial is expected to continue until Aug. 19. It will likely take months before a final verdict is announced.

A large number of people, from President Recep Tayyip Erdoğan to army generals, were targeted by the putschists. Lawmakers and the families of civilians killed in the coup attempt spoke in court Tuesday, issuing formal requests to the court that they be admitted as co-plaintiffs.

An indictment on what happened at the Akıncı air base during the July 15 coup attempt claims Gülen would have settled in a building at the base if the coup had succeeded. The indictment names Öksüz and Batmaz as two point men for Gülen, who executed the coup attempt with the aid of Öztürk, a former general accused of coordinating the coup attempt as the leader of the junta's Peace At Home Council.

Prosecutors say 11 F-16 jets dropped bombs on several locations, while two aircraft tried to scare people by creating sonic booms in Istanbul. Two other fighter jets were used to track down President Erdoğan's plane as he was brought out of harm's way when an elite team of assassins landed near the hotel where he was staying in southwestern Turkey.

The indictment, the most comprehensive of its kind thus far in terms of the coup attempt, offers details into various stages of the coup attempt that revolved around Akıncı air base. These include the bombing of police headquarters, targeting the headquarters of a satellite provider, attacks on an elite military unit opposing the coup, the bombing of Parliament and violence on the streets near the Presidential Palace, as well as the dispatching of fighter jets from other cities to Ankara. The defendants are also accused of attempted kidnapping in the case of generals opposing the coup in Istanbul, who were allegedly brought to the Akıncı air base. Chief of General Staff Gen. Hulusi Akar and other top military brass opposed to the coup were also held at the base, which was closed after the coup attempt.

Gülen has already been implicated in a string of coup-related trials as the prime suspect. However, this retired imam, whose "Hizmet" ("Service") movement evolved into a terrorist cult, had planned to return to Turkey, freed of his self-imposed exile, the indictment claims. Like Iran's Ayatollah Ruhollah Khomeini, Gülen, who posed as a man promoting religious teachings, would return home if the coup succeeded. Amid hopes for his return, coup plotters had even prepared a building inside Akıncı for the fallen imam.