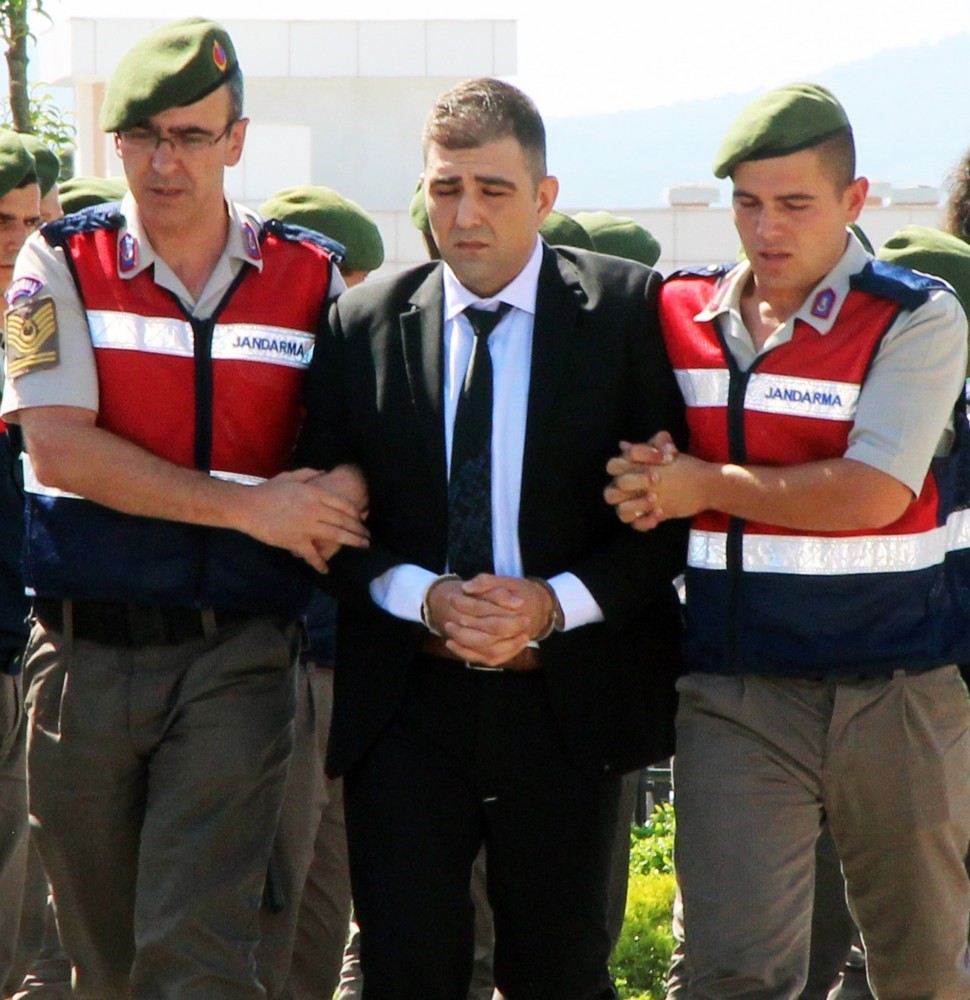 Gendarmerie officers escort Haydar Murat u00d6zden to court. u00d6zden transported would-be assassins of President Erdou011fan to the hotel where he had been staying during the coup attempt.
by Daily Sabah Aug 11, 2017 12:00 am

Two critical trials on last year's coup attempt blamed on FETÖ continued yesterday with defendants who commanded the coup and those sent to kill the president dodging the blame for their actions, with one defendant claiming a putschist officer clearly seen on video was not him

It was another day in court for dozens of defendants in two important trials regarding the July 15, 2016 coup attempt that is blamed on infiltrators from the Gülenist Terror Group (FETÖ) in the army. As usual, defendants tried to shift the blame to others and were in denial about their involvement in the attempt that killed 249 people. One defendant even claimed the man clearly seen in high-definition security camera footage of a military base, where the coup plotters masterminding airstrikes convened, was not him.

In the southwestern city of Muğla where 47 people are tried for plotting to assassinate President Recep Tayyip Erdoğan on the coup night, defendants presented their defenses in the final hearing before the prosecutors' turn to announce their plea.

Most defendants did not offer a final testimony, claiming they were "not prepared" and demanded extra time. Former general Ünsal Coşkun, a pro-coup commander who was serving as head of a gunship unit of the army, was among the few to offer his defense and claimed he did nothing wrong on the coup night. He said he was only tasked with providing helicopters to other military units and did not know "what they would do with them."

Like other defendants, Coşkun faces lifetime imprisonment for his involvement in the coup. Prosecutors accuse him of coordinating the helicopters carrying the would-be assassins of Erdoğan.

"My unit works like a car rental company. We only give vehicles and we don't know what operations are carried out by the people in them," Coşkun told the court.

In previous hearings, Coşkun has said that he complied with "martial law directive" delivered by the office of the Chief of General Staff. Chief of General Staff Hulusi Akar was among the victims of the coup attempt and was held hostage by coup plotters for hours before his release while his aides are accused of delivering coup orders to military bases across the country. Coşkun denied allegations that he was a member of FETÖ.

FETÖ, led by U.S.-based fugitive preacher Fetullah Gülen is accused of orchestrating the coup thanks to officers loyal to Gülen in the army. Gülenists have been infiltrating into the army, law enforcement, judiciary and bureaucracy for decades, prosecutors say, before they moved to seize power in two coup attempts in 2013 by their infiltrators in the judiciary and police and by infiltrators in the army last summer that was foiled thanks to public resistance.

Gülen is the prime suspect in all the coup trials, along with a number of non-military members of his terrorist group who served as point men in organizing the putsch attempt. During the coup bid, President Erdoğan and his family were staying in a hotel in Marmaris, a popular vacation resort in Muğla. When the president found out that a coup was unfolding across the country, he quickly left the hotel and flew to Istanbul where he rallied anti-coup crowds to confront the putschists.

Two teams of pro-coup officers, all from an elite military unit, arrived in the hotel to kill or capture Erdoğan and engaged in a shootout with police guarding the venue. Soldiers managed to escape after the shootout before killing police officers and most were captured days later while hiding out in the Marmaris countryside. A high-ranking officer who was among the would-be assassins is still at large while a general who organized the assassination mission is among the jailed defendants.

First Lieutenant Haydar Murat Özden, a helicopter pilot who transported soldiers sent to kill Erdoğan, also presented his defense yesterday and claimed he was not aware of a coup attempt, or a mission to kill Erdoğan until he saw what happened on TV after he landed at a military base in Bodrum, a town near Marmaris. He said he damaged the helicopter so that putschists would not use it and fled.

In the capital Ankara, hearing of 486 defendants in the biggest trial on the coup attempt continued with the defense of a colonel who was at Akıncı, the military base that served as the command center of the putschists who held anti-coup generals hostage and ordered airstrikes in Ankara.

Murat Koçyiğit, a gendarmerie intelligence officer accused of representing the "pro-coup arm" of his unit in Akıncı, denied allegations and said he was in the base only "to visit a friend." That friend was Ahmet Özçetin, another colonel accused of arranging the coup attempt in Akıncı. Koçyiğit said he went to Akıncı for "a surprise visit" to Özçetin, someone he admitted he barely knew. He denied he was present in the meetings between putschists about a week before Gülenists tried to seize power.

Prosecutors say FETÖ-linked officers were already planning the coup when they learned the government's preparations to weed out Gülenists from the army but rescheduled the attempt; fearing the country's leaders had intelligence on their plans. Koçyiğit also denied he used Bylock, an encrypted messaging app exclusively used by FETÖ members despite evidence to the contrary. He claimed he was "trapped" in the base when putschists prevented anyone in the base from leaving the base.

The court showed photos of Koçyiğit seen in a place swarmed with putschists to the defendants and asked if it was him who was freely walking around the coup plotters in Akıncı. Koçyiğit claimed it was not him in the photos taken from the security camera footage.

An indictment on what happened at Akıncı names Fetullah Gülen as the prime suspect in the coup bid and says the base was intended to be used as Gülen's home if putschists had been successful.

The indictment, accompanied with photos of the Akıncı Air Base and images from security camera footage showing those involved in the coup, says Gülen was "number one" in the coup attempt, while Adil Öksüz and Kemal Batmaz, two "civilian" members of FETÖ, are named as his accomplices. Öksüz was nabbed by security forces at the base after the coup was quelled, while Batmaz is seen in the security camera footage included in the indictment walking freely in the aisles of the military base's command floor and at some point, receiving a military salute from an officer. Batmaz was a businessman running a FETÖ-linked company and he was among the few civilians at the base on the night of the coup attempt.

The indictment, the most comprehensive of its kind so far in relation to the coup attempt, provides details on various events that unfolded during the coup attempt around the Akıncı base. These include the bombing of police headquarters, the seizure of the satellite provider headquarters, an elite military unit opposing the coup, bombing of Parliament and on the streets near the Presidential Palace, as well as the dispatch of fighter jets from other cities to Ankara. Defendants are also accused of attempts to kidnap generals opposing the coup in Istanbul and of bringing them to the Akıncı Air Base. Army Chief Hulusi Akar and other top military brass opposing the coup were held at the base that was closed down after the putsch bid.

Prosecutors say Akın Öztürk, former head of Turkish army's Air Forces was the highest ranking military figure involved in the coup bid. According to the indictment, Öztürk "organized and executed the coup" and "gave orders to coup plotters."