Coup plotter who abducted army chief says he was 'misunderstood' 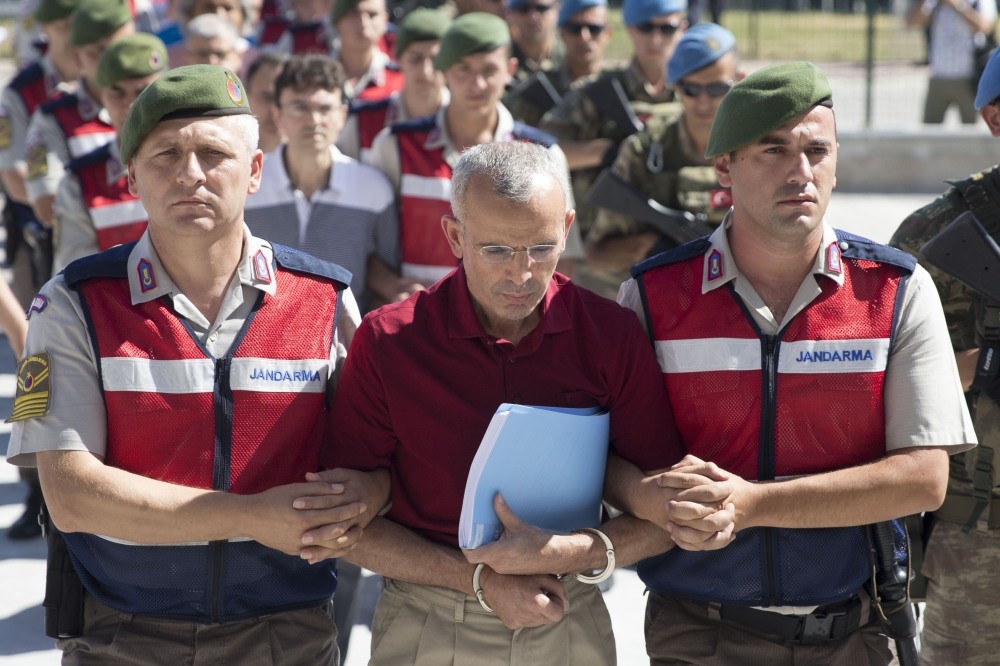 Mehmet Dişli, the pro-coup general who arranged the abduction of the army chief during the July 15 coup attempt blamed on FETÖ, told a court on Friday that the kidnapped chief ‘mistook' him for his kidnappers

The week of hearings in two critical trials surrounding the July 15, 2016 coup attempt blamed on the Gülenist Terror Group (FETÖ) ended with statements from the defendants that amounted to blatant lies. Mehmet Dişli, the pro-coup general who tried to convince Chief of General Staff Hulusi Akar to join the putschists and ordered his abduction when the latter rejected, denied the coup allegations. To the amazement of the plaintiff's lawyers, Dişli claimed he was also a victim of the coup attempt, claiming that Akar might have "mistaken" him for a putschist when they were "taken" together to the putschists' command center by helicopter.

Dişli's denial of his role in the coup despite evidence to the contrary is part of what plaintiffs call a defense strategy based on repeated denial and blatant lies. The general, who was the head of the strategy department of the army headquarters before the coup attempt, is accused of orchestrating the abduction of Hulusi Akar, who was released hours later when the coup bid was quelled. He is also the man who broke the news of the coup to Akar when he entered the army chief's room in the capital Ankara, where fighter jets took off to launch airstrikes on Parliament and the Presidential Palace as well as on anti-coup civilians. "Sir, the operation began. We will round up everyone. Brigades and battalions are mobilized. You will see this soon," he told Akar, according to the army chief's testimony. When an angry Akar refused to join the putschists, Dişli let pro-coup officers, armed to the teeth, into the room. Gen. Akar was forced to board a helicopter bound for the Akıncı military base, the informal headquarters of the putschists in Ankara, in the company of Dişli.

He told a court in Ankara, currently trying 486 defendants in the country's biggest coup trial, that he "shared the fate of the chief of general staff" on the night of the coup. "We have been together with [Akar] throughout these incidents. He might have misunderstood my position up until we left for the Prime Ministry [when Akar was released]. I believe he will review this opinion of mine," he told the judges during questioning.

Prosecutors say that when Akar refused to support the putschists, other senior coup plotters including Akar's aides Ramazan Gözel and Levent Türkkan stormed the room and Türkkan pointed his gun at the army chief before he was tied up and forced out of the room. Gen. Akar was held hostage with other anti-coup generals at Akıncı where putschists tried to persuade him to switch sides. A strong public resistance helped anti-coup soldiers and the police to overpower the coup plotters in the early hours of July 16. Thus seeing their plans derailed, most pro-coup officers at the Akıncı military base surrendered.

Former Staff Colonel Bilal Akyüz, accused of commanding the Land Forces troops at Akıncı, was another defendant to speak out during Friday's hearing. A member of the putschists' Peace at Home Council, Col. Akyüz said in his defense on Thursday that he was a victim of a plot by other officers and denied all evidence linking him to the coup bid - including alleged links to Fetullah Gülen. Gülen's books were found in his car and he was known to be attending meetings about the planned coup prior to July 15. In a cross-examination hearing on Friday, Akyüz said he thought a counterterror operation was underway on July 15 and "locked himself up" in a room on the military base when he learned about the coup. The prosecution countered this claim by showing the court security camera footage which shows Akyüz on the base. He admitted it was "probably" him in the footage. Regarding his links to FETÖ, Akyüz said he was questioned by his commanders while he was a cadet attending military school in the 1980s for his links to Gülenists but was "acquitted."

Akyüz also denied that he fired on an anti-coup crowd gathered outside the Akıncı base on July 15 and said he never held a gun while at the base. "I might have traces of gunpowder on my hands because I was helping other soldiers pick up weapons [left behind by putschists] when the coup ended," he said, angering plaintiffs in the courtroom who claimed they were fired on by Akyüz and others on July 15.

Another critical trial on Friday was held in Muğla, a southwestern province where President Recep Tayyip Erdoğan was vacationing on July 15, 2016. Two teams of assassins, all elite soldiers on the side of the putschists, raided the hotel but Erdoğan, learning of the coup attempt at the last minute, managed to leave. Erdoğan would later fly to Istanbul secretly and would mobilize crowds to counter the coup plotters. The would-be assassins who killed the police officers guarding the hotel were captured a few weeks after they fled the scene. Forty-seven people are being tried for plotting to assassinate Erdoğan.

Former Col. Cenk Bahadır Avcı, who was the commander of an air base in Antalya where helicopters carrying the would-be assassins of Erdoğan landed for refueling, testified at Friday's hearing. He denied the coup charges and claimed he decided to allow the suspects to refuel as he "did not believe" it was a local governor on the phone who told him not to allow the helicopter to refuel. Avcı said the pilot of a helicopter landed at the Dalaman base where he was deployed and told him that he was acting under the orders of the army commander, not the coup plotters. "As he was refueling the helicopter, I was speaking on the phone with Muğla Governor Amir Çiçek. He spoke threateningly and told me I would 'be responsible' for allowing the refueling of the [putschists'] helicopter. I didn't believe it was really the governor but I ordered a halt to the refueling anyway but it was too late," he told the court. He admitted that he hesitated when an anti-coup commander told him to prevent them from boarding the helicopter, which took off after refueling. He said he received orders for refueling from Tezcan Kızılelma, his superior who is accused of being a coup plotter. While Kızılelma's name was in the martial law directive of the putschists sent to military bases, Avcı claimed he "did not notice it" when he read the directive ordering him and other officers to join the coup attempt.

The first coup trials started in December and several defendants were handed life sentences for their role in the coup. The main trials, including trials of those who led the Peace at Home Council, are still underway.

Most of the defendants deny their role and even their presence in places taken over by putschists despite mountains of evidence, ranging from security camera footages and photos to fingerprints which show they were actually there. Lawyers say that the defendants hope they would be "liberated" by FETÖ, a powerful terrorist group which had infiltrated law enforcement, the army and the judiciary over the past few decades. The defendants also hoped that their denial would help their case if they plan to take it to the international courts, according to experts. Some of the defendants even openly mock the courts where they face aggravated life sentences.

Justice Minister Abdülhamit Gül assured the public that the lax attitude of the defendants in the trials did not mean anything and, to the contrary, showed how well organized FETÖ is. "Their lies and actions during the hearings will not help them. Turkish courts conduct fair and independent trials and I urge people to have full confidence in the courts and not to doubt that justice will prevail. We hope the courts will issue fair verdicts as soon as possible," he told reporters on Friday. Gül said the putschists were "instructed" by FETÖ to tell lies and deny their role. "However, there is ample evidence against them. We have a Parliament and a Presidential Palace that were bombed by the putschists. We have 249 martyrs. The courts have evidence of the coup and the [putschists] will be handed down the sentences they deserve," Gül said.

Chief Public Ombudsman Şeref Malkoç was among those watching the trial over the Akıncı military base coup bid and praised the legal process thusfar. "We see that the hearings are being conducted in line with proper regulations and the courts are complying with international legal standards. The defendants have the right to defend themselves and the plaintiffs' lawyers have sufficient time for cross-examination," he said.