Denial as usual as trials of July 15 coup plotters resume 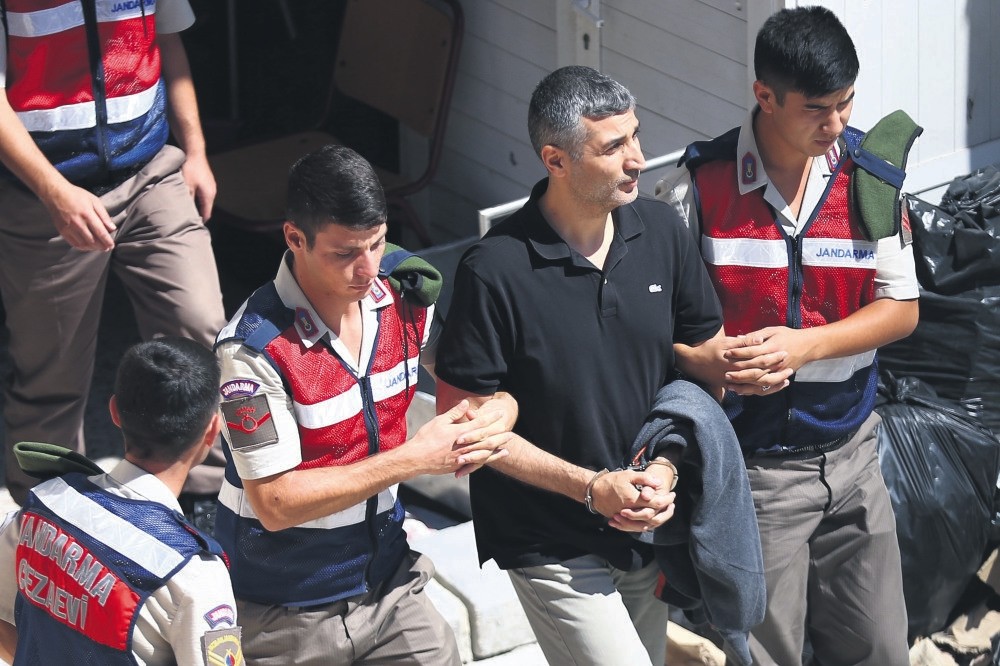 Two major trials on last year's July 15 coup bid blamed on the Gülenist Terror Group (FETÖ) resumed Wednesday after a brief recess. Copying the testimonies of dozens already tried, the defendants claimed they did not have a role in the coup and insisted that they thought what happened on July 15 was "an anti-terror operation" initially. They staunchly denied their links to the putsch bid despite several pieces of evidence, from footage and images to the testimonies of eyewitnesses.

In the capital Ankara, the new hearing of 486 defendants opened inside a high-security prison complex that also houses a large courtroom. All of the defendants are accused of coordinating the coup attempt at Akıncı military base, which was used as the command center of the putschists.

Former major, Ali Karabulut, a military officer deployed at the 143th Fleet on the base, was the first to testify in the hearing. He said fleet commander Mustafa Azimetli ordered him to stay at the base on July 15 after his shift ended, citing "a planned anti-terror operation."

Investigators have found that Karabulut was linked to Sinan Kurt, a civilian who served as a point man for FETÖ who coordinated the group's infiltrators in the army. Karabulut is accused of assigning low-ranking officers to critical duties during the putsch attempt and arranging food supplies for pro-coup troops. The former major was also the officer who told warplane and gunship pilots used by the putschists to use the password "Peace At Home" during the landings at the Akıncı base.

"Peace At Home" was the name of so-called council composed of 38 military officers who masterminded the coup attempt and was allegedly used for coup plotters to recognize those involved in the putsch.

Karabulut told the court that it was Hakan Evrim, the commander of Akıncı base, who ordered him to tell the pilots to use the "Peace At Home" password. Evrim is among the jailed defendants in the Akıncı trial. Karabulut said he "found out" that a coup was underway after midnight and was never involved in it. The defendant claimed he "did not know" that warplanes and gunships were dispatched to Akıncı from other cities and denied phone records showing his contact with other coup plotters. He claimed he never used his cellphone on July 15.

He also denied his initial testimony that he had contact with Sinan Kurt and said he "did not know" him. Baffling prosecutors and the plaintiffs' lawyers, Karabulut said he did not know who the civilians he was seen with were in security camera footage.

Deciphered correspondences between FETÖ members revealed that the group long planned to pursue a strategy of constant denial in the trials of its followers, long before last year's coup attempt. Almost all of the defendants in the coup trials have outright denied their involvement despite overwhelming evidence presented against them.

In the southwestern city of Muğla where President Recep Tayyip Erdoğan was on vacation on July 15, 2016, the trial of the 47 defendants accused of attempting to assassinate him resumed yesterday.

The defendants presented their closing arguments. Selman Çankaya, a noncommissioned officer among the defendants, claimed he did not know that a coup attempt was underway when he and others were ordered to return to their military base in the western city of İzmir for "an anti-terror mission."

He said that former brigadier general Gökhan Şahin Sönmezateş, who coordinated the mission, told them that martial law was declared but he did not question his orders. He insisted that he fired upon the police officers who were guarding the hotel where Erdoğan was staying at. Two police officers were killed by the gunfire of an assassination team who arrived at the hotel premises by helicopter. President Erdoğan and his entourage had left the hotel when they found out a coup was underway. Erdoğan then secretly traveled to Istanbul and mobilized the public to resist the putsch attempt.

The coup trials in Turkey started last year and hundreds of officers, from lieutenants to generals, are being tried for the attempt. So far, only a few defendants have acknowledged their links to FETÖ despite evidence showing their meetings with the group's members.

Most of the defendants have also avoided saying FETÖ was behind the coup attempt. The plaintiffs' lawyers say this is a defense strategy to vindicate them, hoping that FETÖ will liberate them from prison.

FETÖ leader Fetullah Gülen, who currently lives in Pennsylvania, is the prime suspect in the coup cases and faces life imprisonment. However, Gülen has not returned to Turkey to attend the trials and Ankara has been actively seeking his extradition from the U.S.