Trials and more detentions in Turkey's fight against FETÖ 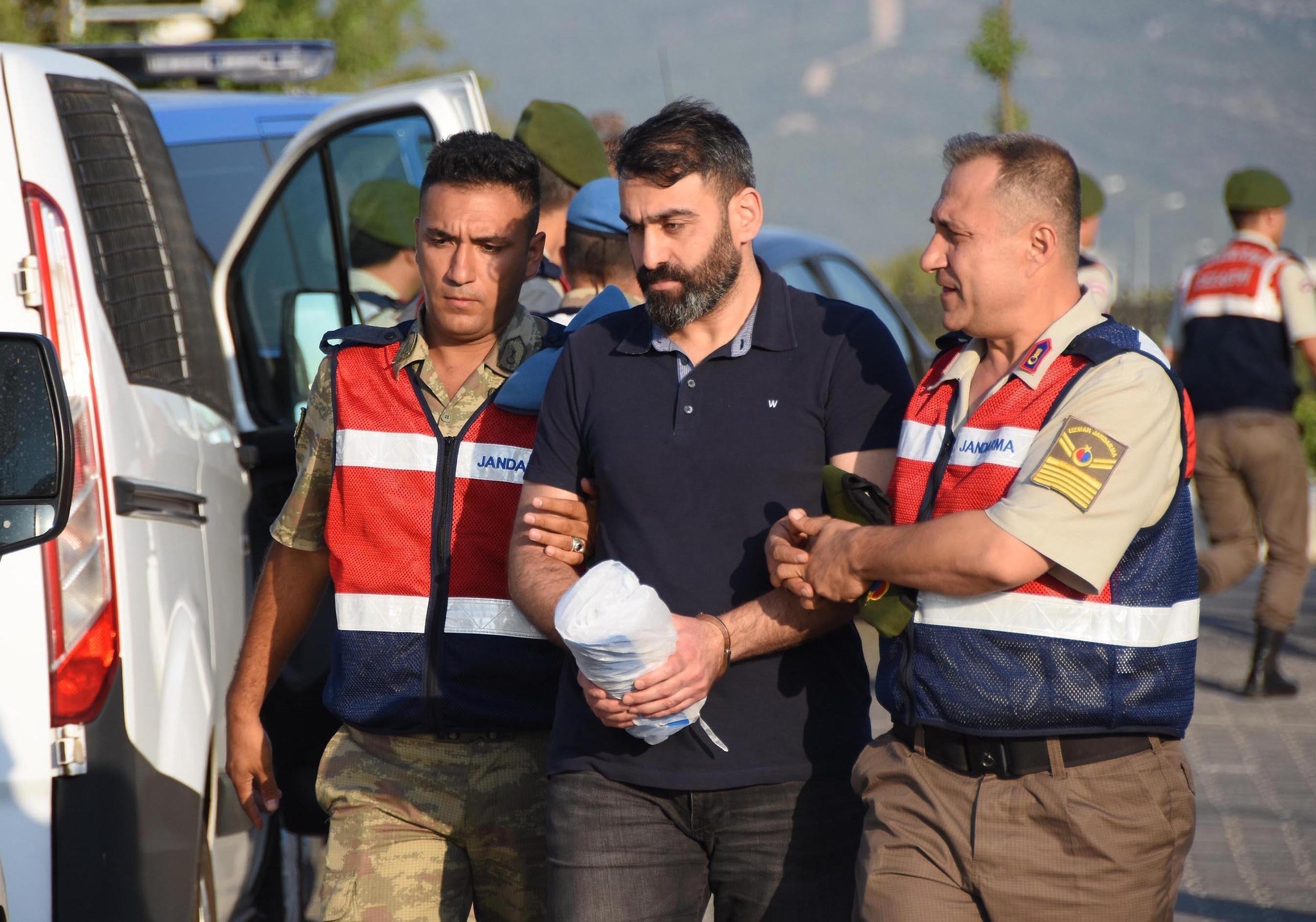 Gendarmerie officers escort u015eu00fckru00fc Seymen to the court. Seymen was the leader of pro-coup troops from the Special Forces sent to assassinate President Recep Tayyip Erdou011fan during the coup attempt.
by Daily Sabah Sep 09, 2017 12:00 am

At least 43 people were detained on Friday in operations against FETÖ, the terrorist group behind last year's coup attempt, while the hearings of coup plotters continued with the common denial strategy being used by the defendants

More than one year after a coup attempt claimed the lives of 249 people, Turkey is continuing its fight against the terrorist group behind it. At least 43 people, from military officers to civilians, were detained on Friday in nationwide operations against the Gülenist Terror Group (FETÖ).

Courts in the country, meanwhile, continued hearings where coup plotters are being tried. Defendants have sought to prolong the trials with their usual defense based on denying everything altogether despite the overwhelming evidence being presented against them.

A court in the central city of Kırşehir sentenced 40 former police officers linked to the terrorist group to prison with terms varying between six and 10 years.

In cities of İzmir, Istanbul, Diyarbakır and Çanakkale, 20 suspects including on-duty military officers, were detained for their links to the terrorist group.

In the southwestern town of Marmaris, where a major naval base is located, police detained five military officers as part of an investigation by the chief prosecutor's office in the northwestern city of Kocaeli.

Meanwhile, in the western city of Eskişehir, a former military cadet accused of helping coup plotters at a military academy on July 15, 2016, was detained by police.

Police also detained 10 people, ranging from students to accountants, in the western city of Uşak and other cities for their connections to the terrorist group while seven others are still wanted in the same case.

In the southwestern city of Muğla, the court heard the defense of a former major, Şükrü Seymen, who commanded pro-coup soldiers from the elite Special Forces dispatched to assassinate President Recep Tayyip Erdoğan during the coup attempt.

President Erdoğan had managed to flee the hotel he was vacationing in Muğla's Marmaris district before the team of would-be assassins arrived. Erdoğan would later travel to Istanbul from Marmaris and mobilize the public against the coup plotters in a live video message.

Seymen was among the few defendants who openly admitted his role in the coup bid.

"I am not a crybaby. I knew it was a coup," he had said in an earlier hearing.

The majority of defendants in coup trials underway across the country have staunchly denied their involvement in the coup bid.

Some claimed that they simply followed orders while others said they were "tricked" by their pro-coup superiors who told them that they were participating in counter-terrorism operations.

Seymen, who is among 43 jailed defendants for attempting to assassinate the president, said in Friday's hearing that neither he nor his team opened fire on police officers who were guarding Erdoğan's hotel even though two police officers were killed.

Like other defendants who testified before him, Seymen said "another team" of assassins arrived at Erdoğan's hotel before them and they were the ones who killed the police officers.

In the capital Ankara, former captain, Ahmet Tosun, a member of coup plotters' Peace At Home Council which sought to seize power, testified on the incidents that took place on July 15, 2016 at the Akıncı military base.

The base was used as a command center of the putsch attempt and airstrikes in Ankara were carried out by warplanes and helicopters that took off from there.

Tosun, who was among the officers who coordinated the airstrikes, denied his role in the coup attempt. His defense in Friday's hearing had all the hallmarks of what FETÖ leader Fetullah Gülen instructed his followers to say in trials.

Tosun said he "condemned FETÖ for the coup," a statement Gülenists urged captured followers to say in court, according to decrypted messages between FETÖ members.

Tosun was in utter denial, another piece of advice given to FETÖ followers standing trial. Tosun claimed it was not his voice in a taped recording, which is being used as evidence against him, when he told pilots the coordinates of where to bomb in Ankara during the coup bid.

Deciphered correspondences between FETÖ members revealed that the group long planned to pursue a strategy of constant denial in the trials of its followers, long before last year's coup attempt.

Almost all of the defendants in the coup trials have outright denied their involvement despite the overwhelming evidence being presented against them.

The coup trials in Turkey started last year and hundreds of officers, from lieutenants to generals, are being tried for the attempt. So far, only a few defendants have acknowledged their links to FETÖ despite evidence showing their meetings with the group's members.

Most of the defendants have also avoided saying FETÖ was behind the coup attempt. The plaintiffs' lawyers say this is a defense strategy to vindicate them, hoping that FETÖ will liberate them from prison.

FETÖ leader Fetullah Gülen, who currently lives in Pennsylvania, is the prime suspect in the coup cases and faces life imprisonment. However, Gülen has not returned to Turkey to attend the trials and Ankara has been actively seeking his extradition from the U.S.