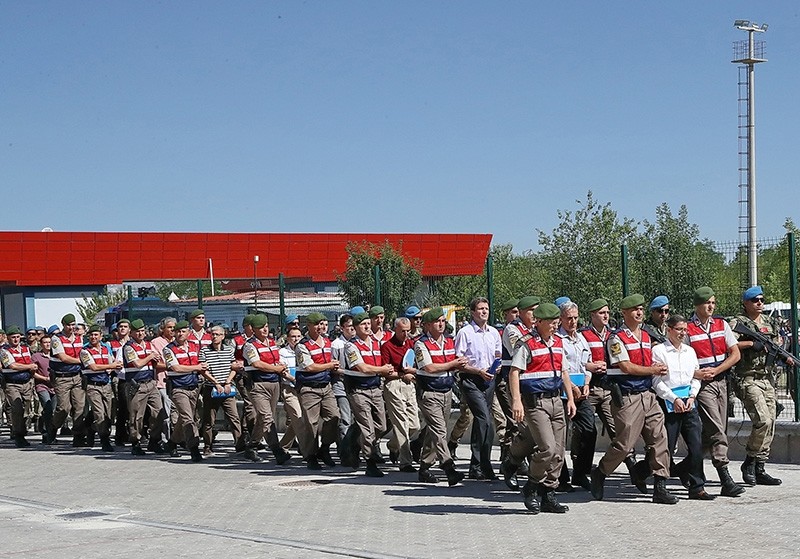 One of the defendants of the biggest trial on Gülenist Terror Group's July 15 coup attempt told the court that he heard former General Akın Öztürk murmur "Israel sold us out" after they were detained by police following the coup's failure.

Former sergeant Ahmet Taşhanlıoğlu, who attended the trial on Akıncı Air Base, which was used as a headquarters by FETÖ during the coup, said that he did not speak with Öztürk after they were detained, but he heard him murmur "Israel sold us out" as they were waiting for procedures.

"I thought foreign powers may be involved in the coup attempt when I heard him say this" Taşhanlıoğlu said.

The former sergeant dismissed any involvement in the coup bid, saying he has evidence proving he was at home at the time of the attempt.

Meanwhile, Öztürk denied the allegation and said that the court should ask Kemal Mutlu about it.

The majority of Akıncı trial defendants are soldiers, including former Air Force Cmdr. Gen. Akın Öztürk. Öztürk is accused of heading the Peace At Home Council of pro-coup soldiers and was captured at Akıncı during the coup bid. In a separate trial on the coup attempt, he claimed he simply visited the base to see his grandchildren. His son-in-law, Hakan Karakuş, is among the military officers who joined the coup attempt and is accused of commanding a fighter jet that carried out airstrikes against the anti-coup crowds.

President Recep Tayyip Erdoğan, ministers and lawmakers are among the plaintiffs in the indictment. Erdoğan escaped an assassination attempt during the coup attempt and fighter jets that took off from Akıncı Air Base bombed Parliament. Prosecutors say 11 F-16 jets dropped bombs on several locations while two aircraft tried to scare people by creating sonic booms in Istanbul. Two other fighter jets were used to track down Erdoğan's plane as he was brought out of trouble's way when an elite team of assassins landed near the hotel where he was staying in southwestern Turkey. Coup pilots also flew 10 F-16 jets that took off from Akıncı.