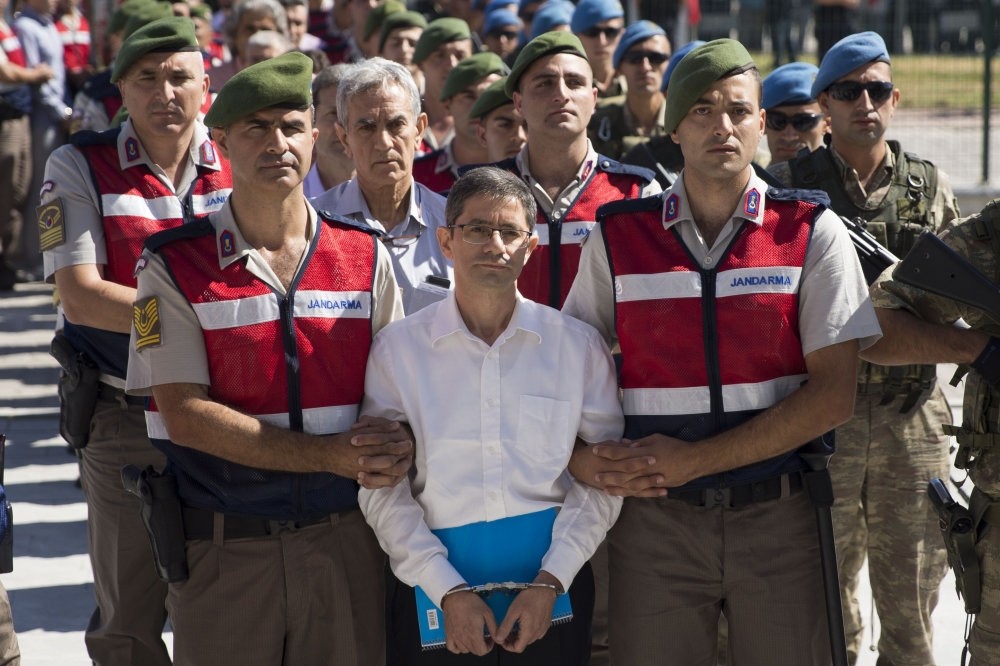 Kemal Batmaz being escorted by two gendarme officers, with former Air Force Commander Aku0131n u00d6ztu00fcrk right behind him.
by Okan Müderrisoğlu Sep 14, 2017 12:00 am

One of the most senior civilian suspects behind last year's coup attempt told U.S. customs officials that he was in their country to pay a visit to Fetullah Gülen, the leader of the Gülenist cult

A civilian captured red handed at the headquarters of plotters during last year's coup attempt told U.S. customs officials a few months before that he was on his way to visit Fetullah Gülen, the fugitive leader of the Gülenist Terror Group (FETÖ). The coup, blamed on FETÖ, last year on July 15 caused the deaths of 250 people and injured thousands. The coup attempt was directed from the Akıncı Air Base near capital Ankara. On July 16, 2016, as authorities pushed back forces supporting the coup and took back control, military forces besieged the Akıncı base, arresting officers and civilians involved in the coup while freeing many senior officers, including Chief of General Staff Gen. Hulusi Akar from captivity.

Among those arrested in or near the base were civilians Adil Öksüz, a theology academic from Sakarya University, and Kemal Batmaz, an executive at a company linked to FETÖ. While Gülen denied any involvement in the coup attempt, he said some of his followers might have been inadvertently involved. Öksüz, was detained near the Akıncı base before being released by a court under suspicious circumstances. He has been missing ever since. Batmaz, when taken aside by suspicious American customs officials in January 2016 as he was entering the U.S., said he was on his way to visit Gülen's house in Pennsylvania, U.S., according to information provided to the Police Department by the U.S. Department of Homeland Security.

The information provides a direct link between the secretive cult leader and last year's coup attempt.

Prosecutors accuse Gülen himself of directing the coup attempt through his FETÖ operatives. His criminal cult infiltrated many state institutions through the decades, controlling recruits through what the cult termed imams, mainly civilians with direct links to Gülen himself. FETÖ recruits within the military, the Police Department, and many judicial bodies under the control of these imams acted for the benefit of the cult and its leader, who has been living in a compound in Pennsylvania in the U.S. for more than a decade.

Both the Obama and Trump administrations have failed to take action for the extradition of Gülen to Turkey where he is being tried in absentia as the number one suspect in the last year's coup attempt.

The Department of Homeland Security was responding to the Interior Ministry's request for details pertaining to the travel records of senior FETÖ operatives Öksüz, Batmaz, Hakan Çiçek, Nurettin Oruç and Harun Biniş in the U.S.

Batmaz, a former executive of Kaynak Kağıt, a paper company that operated one of the largest business conglomerates affiliated with the terrorist group, told the court he was "near" Akıncı to see a plot of land he planned to purchase, in the company of Harun Biniş, another employee of a FETÖ-linked company. Both men were caught on camera in the military base, and Batmaz is accused of being a senior non-military figure in the terrorist group who executed the coup plot.

Footage from within the base shows all suspects mentioned above were present at the Akıncı Air Base on the night of the coup attempt and generals involved in the coup openly saluting Batmaz.

Meanwhile, Nurettin Oruç told a court he was in Kazan, Ankara, the district where the Akıncı base is located, to shoot a documentary on livestock breeding. It would be a coincidence, as Oruç claimed, were it not for the fact that Akıncı was actually the command center of the nationwide coup attempt and the place where fighter jets took off to strike Parliament and the presidential complex.

Oruç was also caught on camera walking inside the base, though he claimed he has never been inside, insisting that he was "out in the open" in a field where gendarmerie forces captured him. Oruç, who has links to the terrorist group like other defendants, had no cellphone on him, also in tune with other key defendants, claiming he forgot to bring it with him that day.

Hakan Çiçek, owner of a private school linked to the terrorist group, was among non-military suspects caught at the base and is accused of being a point man for staff officers loyal to FETÖ.

Çiçek said he was at the base for "a social activity" he described as "happy hour" where he sought "to promote his school to officers seeking to enroll their children there."

Batmaz, who visited the U.S. dozens of times since Feb. 8, 2008, last went to New York on July 12, 2016, returning to Istanbul the next day, only days before the coup attempt. During his visits, Batmaz usually cited addresses in New York, Newark, Baltimore and Washington D.C.

On Jan. 1, 2016, customs authorities became suspicious of him during passport control and took him aside for an interview. He had $7,000 with him, and according to records, he said he would be at the Hotel Riviera at 169 Clinton Ave Newark, NJ during his stay. He also gave the names of two friends he said were welcoming him. He later said one of them, Yavuz U., would be taking him to Gülen's home in Pennsylvania to meet with the cult leader.

According to information provided by the Department of Homeland Security, Çiçek, Oruç and Biniş also visited the U.S. multiple times in the past several years.