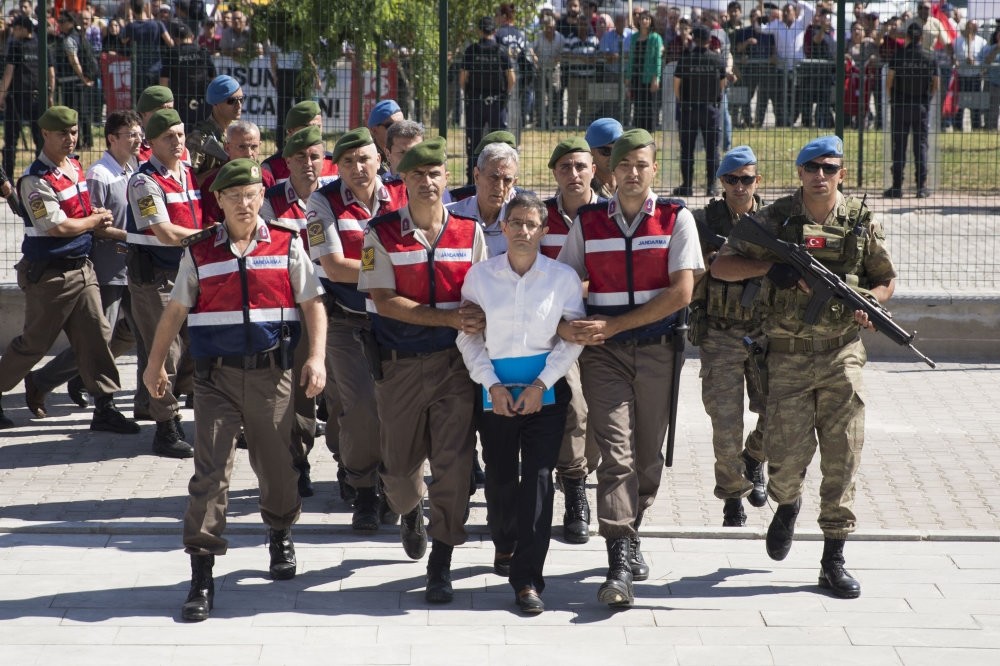 Kemal Batmaz's rise and fall mirrors that of FETu00d6. He went from managing a tea shop to a top executive, before being arrested the day after last year's coup attempt at the Aku0131ncu0131 Air Base.
by Ersan Atar Sep 19, 2017 12:00 am

Millions of dollars and lira were transferred from the Air Force Command to companies linked to FETÖ, according to a report by the Financial Crimes Investigation Board

The Gülenist Terror Group (FETÖ) defrauded the Air Force Command over the years to the amount of more than TL 15 million ($4.3 million), practically financing its deadly coup attempt on July 15, 2016. According to a Financial Crimes Investigation Board (MASAK) report on FETÖ's civilian operatives who control state institutions, or imams, dated Aug. 22, money transfers from the Air Forces Command Intelligence Department started on April 10, 2014 and ended only two days before last year's coup attempt.

Adil Öksüz, FETÖ's Air Forces Command imam, who was arrested at Akıncı Air Base near Ankara, which served as the coup's command center, the day after the coup attempt but was released a short while later under mysterious circumstances. He remains a fugitive. Second only to Öksüz, second most senior civilian putschist Kemal Batmaz plays an important part in the illicit transfers on money. He was also arrested at the Akıncı base and is currently in prison pending the end of his trial.

In the 49-page report, Batmaz's surprising rise through the years is outlined. His first job was at the Çağ Education Facilities, or Fatih College in Istanbul, where he was managing the tea shop.

Then he found a place at Kaynak Foreign Trade, part of Kaynak Holding. An Istanbul court in November 2015 ordered the appointment of trustees to administer the holding, which covered 19 subsidiaries, one foundation and one association.

Batmaz later became a senior executive at Kaynak Paper Ltd. While working there, he purchased 12 percent of Gür-Med Medical Appliances firm, owned by Mehmet Sungur, who is also accused of links to FETÖ and is currently a fugitive. Batmaz also founded another medical appliance firm with Harun Biniş, who was arrested at Akıncı and is currently tried for treason for involvement in the coup attempt.

Two IT companies established by Sungur and cousin Nejdet Sungur, Atesin Programming and Milsoft Programming, received millions of Turkish liras and dollars from the Air Forces Command Intelligence Department over the years. Between April 2015 and June 2016, Atesin received a total of $2,284,397 in six separate installments. The biggest transfer took place a month before the coup attempt, June 15, 2016 and amounted to $700,000. Milsoft received a total of TL 7,062,109 in 10 separate transfers, all of which came after what is termed "FETÖ's judicial coup attempt" in December 2013, which involved the terror group's operatives within the judiciary and the police launching corruption operations against senior government officials based on spurious evidence.

MOLE WITHIN MILITARY TRIEDThe Air Forces Command part of this FETÖ operation was carried out by former Br. Gen. Gökhan Şahin Sönmezateş, who is also charged for setting up and commanding the assassination squad sent against president Recep Tayyip Erdoğan on the night of July 15 2016.

An assassination squad was sent to the hotel in Marmaris, a resort town on the Aegean coast, where the president and his family were staying on the night of July 15, 2016 by the coup plotters. Erdoğan escaped from the assassins just in the nick of time before flying to Istanbul from where he directed the anti-coup measures during the night and the next day.

During his court testimonies, Sönmezateş repeatedly claimed that he was no Gülenist, a term used for those loyal to fugitive cult leader Fetullah Gülen, who currently lives in exile in Pennsylvania, the U.S. "I am a member of no cult. I never bent in front of an imam or a hodja."

MASAK investigations showed that the Sönmezateş, who was the deputy chairman of the Air Forces Intelligence Department at the time of the coup attempt, was in charge of procurement and his signature is under the purchases cited above.

Sönmezateş, who was arrested in Ankara before being sent to Muğla province to face charges of commanding the assassination squad, is also accused of attending a series of meetings held by Öksüz prior to the coup attempt.

Sönmezateş admitted to court that he was part of the coup attempt but refused charges that he participated in the coup on the orders of Gülen.