Coup plotter who terrorized Istanbul resorts to denial in trial 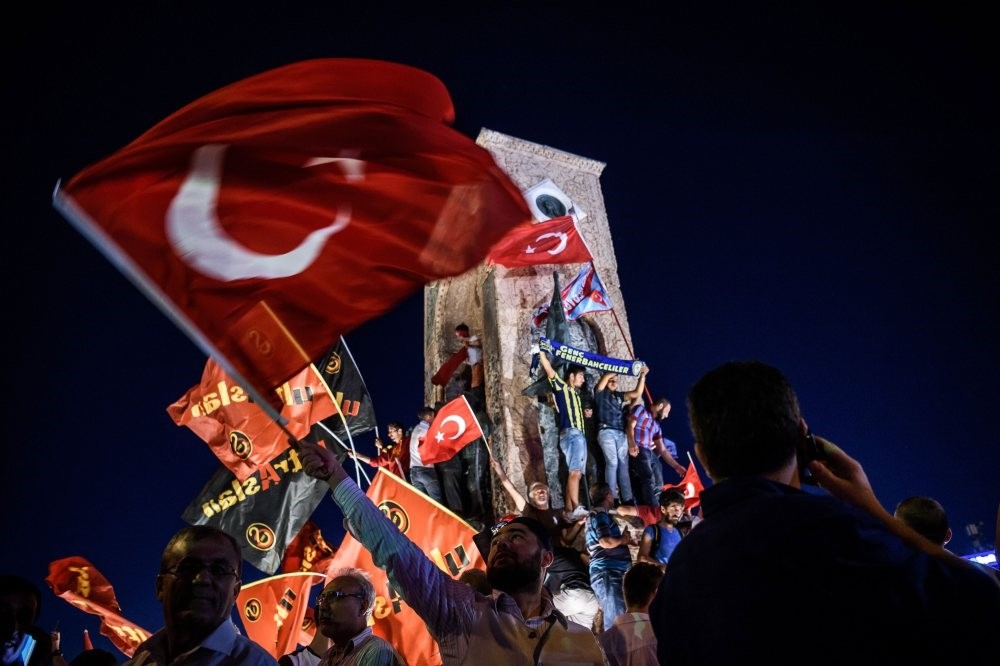 People celebrate the victory against the putschists at Istanbul's Taksim Square on July 23, 2016. On July 15, 2016, pro-coup officer Mu00fcslu00fcm Kaya ordered the attacks on an anti-coup crowd gathered at the same square.
by Daily Sabah Sep 26, 2017 12:00 am

A former colonel, who coordinated the coup plotters' effort to take over Istanbul during last year's bloody coup attempt by FETÖ, bluntly claimed that despite clear evidence, he did not order the shooting of anti-coup civilians and the takeover of TV stations

Müslüm Kaya, a former colonel who was among the key figures coordinating the coup attempt in Istanbul on July 15, 2016, testified in court Monday.

Kaya, whose chilling messages to shoot civilians and police were recorded in a WhatsApp group of the coup plotters linked to the Gülenist Terror Group (FETÖ), resorted to the same defense strategy as other defendants in similar trials. He denied all the concrete evidence showing his involvement in the putsch bid that killed 249 people.

The disgraced ex-colenel, who was captured in a hideout in the central city of Konya with another pro-coup officer days after the coup was foiled, appeared before a court across the street of the prison complex where he and other coup suspects are being held.

He is among 24 defendants, including nine at large, facing life imprisonment for their involvement in the bloody coup attempt.

Kaya told the court he went to the military base he was deployed at when his superiors ordered him to do so "to take precautions against a likely terror attack."

He denied he was among the officers who attended a meeting to plan the coup before July 15 at a military school in Istanbul. He said he did not leave the military base and he did not order troops to leave the base.

According to the prosecutor's indictment, Kaya sent a string of messages in a WhatsApp group named after the "Peace At Home Council" of the coup plotters on July 15 and in the early hours of July 16.

All members of the group are charged with attempting to overthrow constitutional order and are allegedly linked to FETÖ, which is accused of using its infiltrators in the army to seize power.

One message Kaya sent reads, "Soldiers are about to capture AKOM," short for the Disaster Coordination Center of the Istanbul municipality.

A high-ranking official at AKOM is accused of collaborating with the putschists to seize the center where a massive control center for security cameras across the city is located.

The putschists also planned to use AKOM warehouses where stockpiles of food are stored in case of a disaster for food supplies to pro-coup troops, according to investigations.

Another message Kaya sent orders an "airstrike" to help pro-coup troops stave off a police raid at AKOM.

In another message, Kaya tells fellow putschists that the soldiers are about to take over a public broadcaster.

"Fly aircrafts low over Taksim" Kaya says in another message, referring to Taksim Square in the heart of Istanbul.

The sonic booms of fighter jets were widely employed by the putschists on July 15 in an effort to intimidate the public who were mobilized to confront the putschists upon calls by the country's leaders.

Kaya also calls for "firepower support" for soldiers in Taksim as they were besieged by unarmed soldiers.

He claimed in the hearing yesterday that he "recalled" units when he realized a coup was underway. He said he "thought of surrendering" but decided to run away when he saw "reports that the detained soldiers were tortured."

"I would have fled abroad if I was really guilty," Kaya told the court.

According to Nebi Gazneli's brother, Kaya accompanied them while they were both hiding in a flat he rented, and the two were planning to flee to Egypt before they were captured. Police have also found that the colonels contacted human smugglers before their capture.

Kaya said he did not send the messages or make the calls with his cellphone on July 15 and asked the court "to investigate who sent the messages."

Other suspects in the case said that Kaya ordered them to "cut the tongue of the imam" who recited a call to prayer from a mosque near the military base where Kaya was deployed.

The call to prayer, accompanied by an anti-coup message, was the symbol of the public's mobilization after finding out that a coup attempt was underway across the country.

The prosecutors ask for six instances of life imprisonment for Kaya for crimes related to the coup and membership of a terrorist group. Kaya and others are accused of the deaths of 89 people in Istanbul during the putsch bid.

The defendants are also accused of attempting to kidnap Gen. Ümit Dündar, former head of the First Army Command in Istanbul.