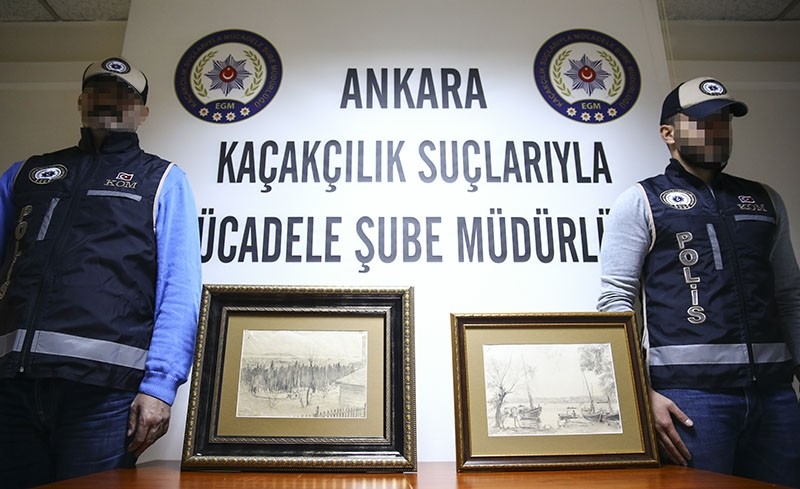 Two paintings of artist Hoca Ali Rıza, who was dubbed as the "National Painter of the Turks" in the late Ottoman era, were seized Thursday by Turkish security forces five years after they were stolen from an Ankara museum.

The two paintings were listed among 180 works stolen from the Ankara State Museum of Paintings and Sculpture in 2012.

Between 2012 and 2015, a special task force of the Ankara Police Directorate's customs enforcement and anti-smuggling department discovered 62 of the 180 works, taking 18 people into custody and charging three.

Authorities discovered the two paintings in an art gallery in Istanbul as they were being put to auction. One person taken into custody was brought to Ankara for questioning.

Born in 1858, Hoca Ali Rıza was an impressionist artist and teacher known for his landscapes and architectural paintings. As a student, he helped founding a painting classroom at the former Kuleli Military High School and Sultan Abdülhamit II awarded him with the Medjidie Order to honor his work.

During the Greco-Turkish War of 1897, Rıza worked as a battle painter. On commission, he helped establish the Turkish Museum of Antiquities. He was also the chairman of the Ottoman Painters' Association.

In 1914, Rıza began teaching landscape painting at the School of Fine Arts, now Mimar Sinan Fine Arts University, later teaching at several high schools in Üsküdar. In his final years until he died in 1930, he lived on a very limited budget, but never sold his paintings, only gifted some to his loved ones.

His paintings number close to 5,000, 11 of which are on display in a special exhibit of the Ankara State Museum of Paintings and Sculptures.
Last Update: Oct 05, 2017 7:22 pm
RELATED TOPICS