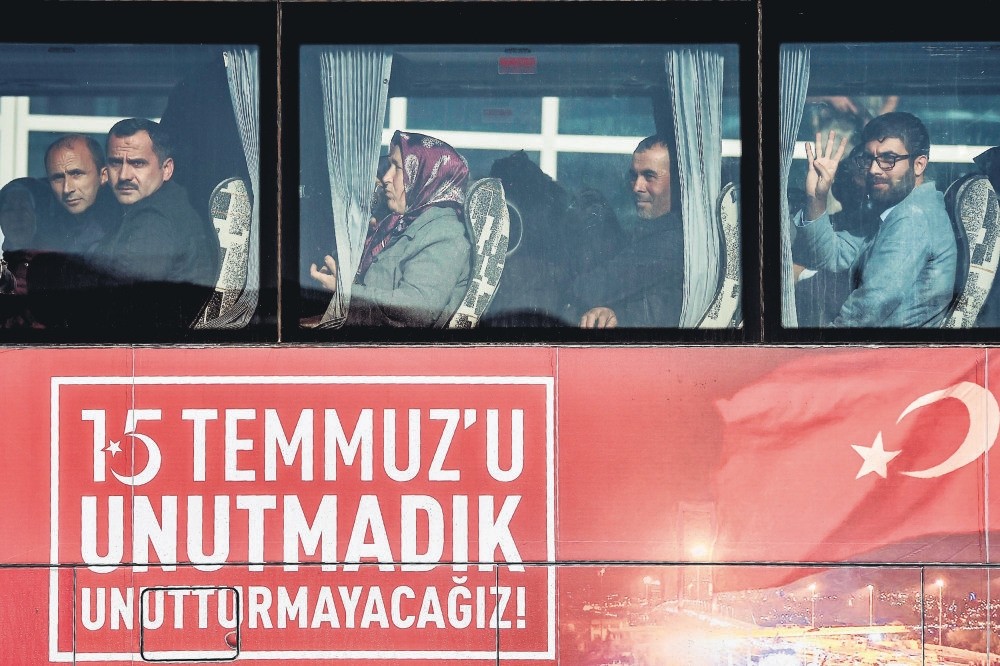 Relatives of victims who were killed on the Bosporus Bridge gesture as they arrive by bus with a sign reading: u201cWe did not forget July 15, we will not let it be forgottenu201d
by Daily Sabah Oct 11, 2017 12:00 am

Two trials in Istanbul and Ankara over last year's coup attempt were the scenes of emotional moments and revelations.

Victims of the lethal bid, which is blamed on military infiltrators of the Gülenist Terror Group (FETÖ), confronted defendants in the Istanbul trial while a defendant in the Ankara trial confessed to being a civilian FETÖ member in the coup attempt.

In Istanbul, conscripts, who claimed they were ordered to occupy the city's Bosporus Bridge by their commanders on July 15, 2016, testified in the second hearing of their trial that started on Monday.

They were among 143 defendants charged with the killings of 34 civilians who were on the bridge simply to convince the pro-coup troops to lay down their arms. 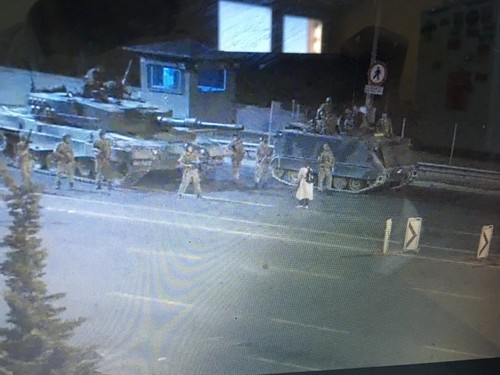 Safiye Bayat, a woman who survived gunfire by putschist soldiers, was among those watching the trial. Bayat, who was injured in the putsch bid when she walked towards them and tried to talk them out of the coup attempt, is among dozens of heroes praised for their stand against putschists.

Abdullah Kıztanır, a conscript at a military school in Istanbul, told the court that his commanders ordered them to go to the bridge. Kıztanır claimed he was not aware the coup attempt when one of his commanders stopped a police vehicle and disarmed the policemen inside. He said he was ordered by his superiors to tell people gathered on the bridge to "go home."

"I saw Ahmet Taştan firing into the air and heard him shouting 'no mercy,' " Kıztanır said. Taştan is an officer among the defendants.

Ahmet Turan Çiftçi, another defendant, said they were ordered out of their barracks for a drill and commanders later told them that they were taking measures against a possible terror attack.

"Ahmet Taştan fired into the air when a woman [Bayat] approached us. Then, people started walking towards us. Taştan ordered us to fire upon them and I obeyed the orders," Çiftçi said.

He said he was too tired and later went to sleep in a military truck. He and the others surrendered on the morning of July 16, 2016.

Bayat criticized the defendant in her testimony.

"I told them that what they were doing wrong. A soldier put the barrel of his rifle on my cheek. Someone among soldiers asked his commander if they should shoot me or arrest me," Bayat said.

She also dismissed claims that the other defendants said they did not witness the killings on the bridge.

"A tank was firing on the crowd while I was walking toward the soldiers. The bridge was shaking. How you cannot see all this?" an angry Bayat asked the defendants at the trial.

Meanwhile in the capital Ankara, a non-commissioned officer who is among 486 defendants accused of commanding the coup from Akıncı Air Base, confirmed the presence of Kemal Batmaz, a senior FETÖ figure, at the base.

Batmaz, on trial for being one of the masterminds of the putsch bid, was among a handful of non-military people in the base on July 15.

Adil Öksüz, who is accused of planning the coup with Batmaz, remains at large. Although he was captured on security camera footage of the base, Batmaz has denied he was in the base and claimed he was captured near the base while looking for a plot of land to buy.

Recent evidence provided by U.S. officials shows that Batmaz, who denied his links to FETÖ, stayed in Fetullah Gülen's house during a visit to Pennsylvania. Batmaz, at one point before the coup, was the executive of a company associated with the terrorist group.

Non-commissioned officer Erkan Çoban said he saw Batmaz in the aisles of the military base with people he did not know and Batmaz was holding a tablet computer. He said Batmaz entered a cafe inside the base and soon after, Hakan Evrim and Kubilay Selçuk, two generals implicated for the coup attempt, followed him into the cafe. He said he was then "forced at gunpoint" to leave that part of the base by a colonel he could not identify.

He also defended giving weapons to coup plotters from the armory of the base and claimed he thought those soldiers were taking the weapons to defend the base.