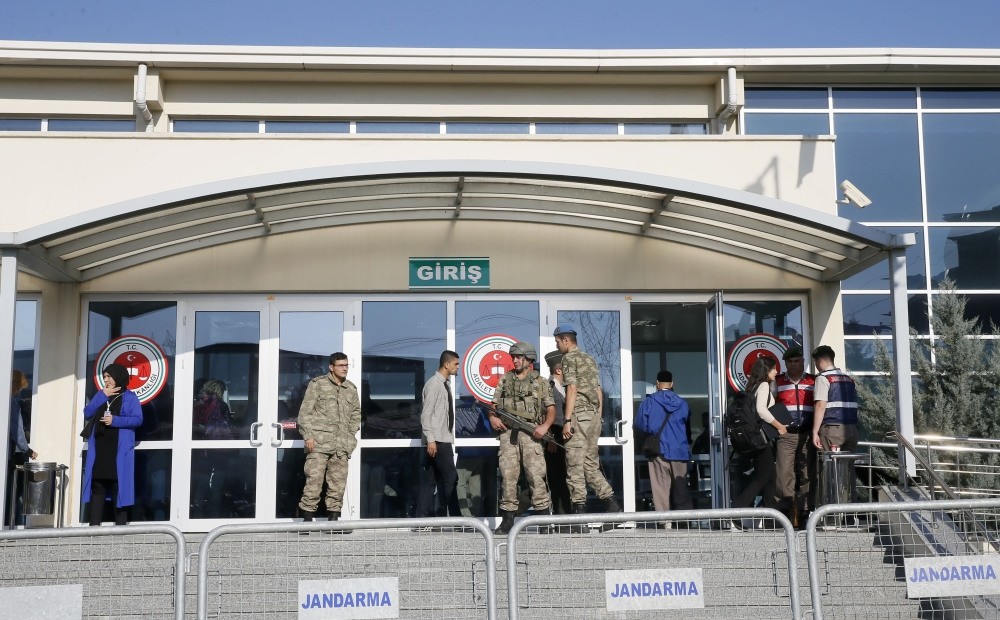 Soldiers stand guard outside a courthouse in Istanbul's Silivri district where pro-coup soldiers accused of killing 34 people are being tried.
by Daily Sabah with AA Oct 12, 2017 12:00 am

A flurry of trials over last year's coup attempt, perpetrated by FETÖ members in the military, continues. An Istanbul court sentenced seven plaintiffs to life in prison, as soldiers implicated in the massacre on the city's Bosporus Bridge provide horrific details from that night

Trials over the July 15, 2016 coup attempt that left 249 people dead resumed Wednesday in Istanbul and Ankara. While hearings continue to be held in smaller cities across the country over the brutal insurrection, one hearing regarding the massacre of 34 people on Istanbul's Bosporus Bridge, as well as the takeover of a major air base in Ankara by coup plotters, is in the spotlight.

Late Tuesday, seven former officers were sentenced to aggravated life imprisonment in Istanbul's 23rd Heavy Penal Court for their role in the takeover of an Istanbul municipality building as well as a mosque on July 15, 2016. The officers were convicted of attempting to overthrow the constitutional order through violence as part of the Gülenist Terror Group's (FETÖ) coup attempt. Led by U.S.-based former imam Fetullah Gülen, FETÖ is accused of masterminding the coup attempt and executing the plot with its followers in the Turkish Armed Forces (TSK).

Former Maj. Özgür Araz, former Cpts. Yavuz Selim Dayi, Muhammed Hayrettin Şahin and Levent Güngör, former Lt. Ayhan Bağdat and former Sgts. Mehmet Türkmen Seyhan and Fatih Alkan had occupied a logistics center of the Greater Istanbul Municipality building along with a mosque. All of the former officers were sentenced to an additional 200 years in prison for depriving people of their liberty through violence.

The convicted perpetrators had been sent to capture the center with the purpose of supplying food to thousands of soldiers who would capture Istanbul. They also tried to kill the imam of a nearby mosque but failed to capture him. All mosques across the country played the call the prayer along with an anti-coup message during the insurrection.

In another trial in Istanbul yesterday, conscripts who were ordered to occupy Istanbul's Bosporus Bridge gave a chilling account of the moments when pro-coup troops indiscriminately fired on a crowd of civilians who had gathered in protest, killing 34 people.

Aykut Şafak Kaya, one of the 143 defendants, was deployed at Kuleli military school whose soldiers were dispatched to the bridge. Kaya, a short-term conscript, said they had no option but to obey the orders of their superiors during the coup attempt. He said they were convinced that they were being sent to the bridge to implement security measures "against a terrorist attack." He said his superiors ordered them to tell motorists who were stopped en route to the bridge a "declaration of martial law." He also described how two traffic policemen were beaten by soldiers after their car was stopped. He blamed Maj. Ahmet Taştan and non-commissioned officer İbrahim Gül for ordering the troops to fire on civilians. Gül was killed in a shootout with police while Taştan is among the jailed defendants. "We were ordered to fire upon anyone approaching them. I saw two men carrying Turkish flags but we were ordered to fire anyway," he said. Kaya added that Gül threatened to shoot them if they did not fire upon the civilian crowd. "He told us that those people were terrorists. After the tanks arrived, soldiers started firing on the crowd. I saw a woman falling down. A man on a motorcycle was heading towards a tank. Someone shouted 'suicide bomber' and Ahmet Taştan ordered us to fire. Some soldiers fired and the man fell from his motorcycle. I don't know what happened to him later," he told the court. He said he fled the scene and hid under a military truck with other conscripts. "I heard a tank fire four times. I saw a first lieutenant firing on civilians from the tank," he said.

Kaya described Ahmet Taştan as "a cold-blooded killer," saying: "He was scary, we couldn't get close to him. He was so emotionless."

In Ankara, a new hearing over the coup attempt at the Akıncı Air Base, the command center of the nationwide coup attempt, was underway with the statement of a non-commissioned officer, Melih Yılmaz, who is among 486 defendants on trial, who claimed that he was not involved in the attempt but witnessed the actions of coup plotters. He said a civilian he did not come across at the base told others around him to "disperse people in Kızılay," a central square in Ankara where anti-coup crowds were rallying. He also said that he recognized Kemal Batmaz among the defendants as one of the civilians who were present at the base on July 15. Like another defendant who testified on Tuesday, he said that he saw Kemal Batmaz using his tablet for a phone call. Batmaz, who is the former executive of a company associated with FETÖ, was captured near the base hours after the coup attempt was quelled. He has denied links to the coup but is accused of masterminding the attempt with a fugitive FETÖ figure. Despite security camera footage clearly showing him, Batmaz has denied his presence at the base in previous hearings.

Meanwhile, a total of 133 people nationwide were arrested yesterday over alleged links to FETÖ. Prosecutors in the southern province of Osmaniye ordered the arrest of 75 soldiers and former soldiers - 56 active-duty personnel and 19 former soldiers - as part of an investigation of FETÖ infiltration of the military. In a synchronized operation in 33 provinces to arrest the 75 suspects, 40 have been arrested so far. There were also 36 arrests in seven provinces as part of a Konya-based investigation into FETÖ's military infiltration, but the sources did not specify if the suspects were on active duty or former soldiers. Thirty soldiers on active duty were arrested on Tuesday as part of the same investigation in the central Anatolian province. In another FETÖ probe, prosecutors in the north-central Tokat province ordered the arrest of 19 people, including 14 active-duty soldiers and five civilians. Twelve people have been arrested so far, with operations to find the remaining seven ongoing. A deputy police chief in the Aegean province of İzmir, who reportedly worked in critical positions, was arrested over his alleged links to high-level FETÖ members, according to police sources.

Seventeen former public servants in the capital Ankara and 10 dismissed teachers and civil servants in the Merzifon district of central Amasya province were also arrested over their alleged use of the encrypted ByLock messaging app.

ByLock was used by FETÖ members and has been cracked by Turkish security agencies, allowing them to identify tens of thousands of apparent FETÖ supporters.