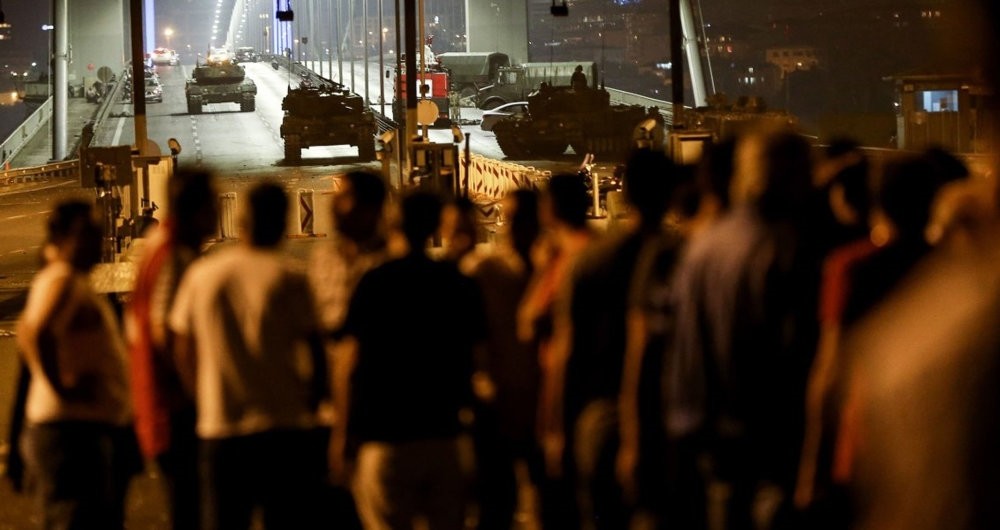 It is now either dead officers or someone else to blame for the murder of dozens and the takeovers that occured during the July 15, 2016 coup attempt. More than one year after the coup was quelled at the cost of 249 lives, trials over the brutal attempt blamed on the Gülenist Terror Group (FETÖ) continue, amid constant denial of involvement from the defendants.

İbrahim Sezer is among 143 defendants charged with the killings of 34 people on Istanbul's Bosporus Bridge during the coup attempt. The former conscript testified at a hearing in Istanbul yesterday, pleading not guilty to charges that carry a sentence of aggravated life imprisonment. He said he was stationed at the Kuleli military school during the coup attempt and was ordered to go to the bridge by his superiors. Sezer said that Major Ahmet Taştan, one of co-defendants, ordered them to tell the civilians who had converged on the bridge that martial law was declared. He said they were also ordered to kill two police officers they had detained on the bridge if they moved."

Sezer claimed they helped the police officers escape while their superiors were not looking. He admitted firing gunshots on the bridge but claimed that he fired into the air. "Major Taştan ordered us to fire on a building where people were shooting at us and on a police vehicle," he said. Sezer said he was forced to join the coup attempt by his superiors and he was following orders. He claimed that casualties would be higher if he and other conscripts joined the coup attempt. İsmail Yurdakul, another conscript, said his commander, Turgay Ödemiş, ordered him to keep a civilian they apprehended on the ground. "I stepped on his back while he was lying face down. He begged me not to do that and I helped him stand up," Yurdakul said. He admitted that the man they had apprehended was carrying a Turkish flag and "didn't look like a terrorist," contrary to what his superiors told them. Many defendants claimed they were tricked by "others" to join the coup attempt under the pretext of taking measures against "possible terror attacks."

The victims, mostly unarmed civilians, and a few police officers, were trying to convince the pro-coup troops to lay down their weapons when the troops opened fire. Victims included Erol Olçok, who was a close friend of President Recep Tayyip Erdoğan, and his 16-year-old son Abdullah Tayyip. Suspects are also accused of a string of crimes, including an attempt to overthrow constitutional order, being members of a terrorist group and murder. Each defendant faces multiple aggravated life terms. The accused suspects fired multiple weapons including rifles and pistols. The putschists also used a tank, which fired four times on a crowd gathered on the bridge, according to prosecutors.

The crowd had gathered on the bridge upon learning that a coup attempt was underway and were trying to convince the soldiers to lay down their arms. According to the indictment, the defendants were dispatched from a military school and a tank division stationed in the city, in line with the plan of coup plotters who had gathered at the military school days before the coup attempt to plan the takeover of the city. Images of armed soldiers on the bridge became some of the first mass-publicized images of the coup attempt. As the public questioned the motives of soldiers seen in videos circulating on television and the internet, the country's leaders addressed the nation and told them that FETÖ was trying to seize power. Soon, crowds poured into streets to confront the putschists and the soldiers on the bridge surrendered eight hours later.

In another trial in the capital Ankara, defendants who had been dispatched to army headquarters to assist coup plotters, gave their testimony. They were among hundreds of military officers who were stationed at a military unit tasked with guarding the president. Former Maj. Halil Çınar, one of defendants, blamed Col. Muhsin Kutsi Barış, a co-defendant, for ordering them to go to the building that housed Chief of General Staff Gen. Hulusi Akar under the guise of protection from a terrorist attack. He said a fellow major told him that they were in the middle of a coup attempt and urged them to leave army headquarters, and he said a colonel ordered them to stay. Furthermore, he denied that it was he who fired on the crowd of civilians outside army headquarters, saying witnesses who testified to corroborate that might have mistaken him for another officer.

In a similar development, at least 10 people were arrested in western Turkey over alleged links to FETÖ. Meanwhile, prosecutors in the southeastern province of Mardin issued arrest warrants for 25 army officers over their links to FETÖ.

Police launched simultaneous operations, coordinated from Mardin and made in 13 Turkish provinces including Istanbul, Ankara, Malatya, Adana and Konya, as well as in Turkish Cyprus . The operation is still ongoing.

FETÖ and its U.S.-based leader, Fetullah Gülen, are accused of orchestrating the coup attempt. The cult is also accused of being behind a long-running campaign to overthrow the Turkish state through the infiltration of Turkish institutions, particularly the military, police and judiciary.

Turkey has launched a nationwide crackdown on the terrorist group in the wake of the coup attempt, detaining and arresting thousands. Enver Başaran, the former mayor of the eastern Turkish town of Aşkale, was among those arrested. A court yesterday sentenced him to six years in prison for being a member of a terrorist group.