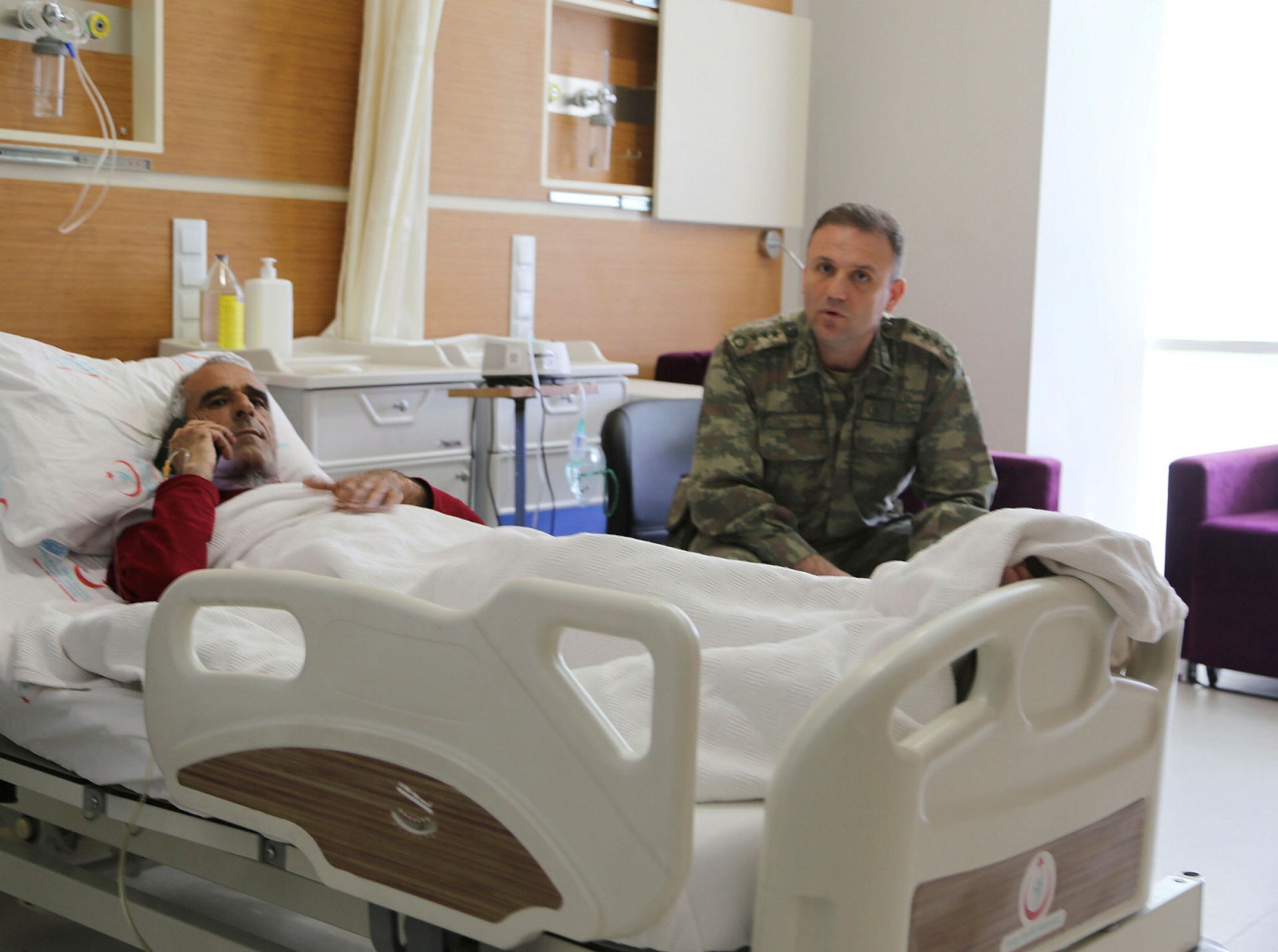 Syrian pilot Sufhan (L) having a phone call with his family as he is under treatment at Hatay State Hospital with a Turkish commander sitting beside him (AA Photo)
by Daily Sabah with DHA Oct 13, 2017 12:00 am

Syrian pilot Col. Muhammed Sufhan, who bailed out of his warplane as it crashed in Turkish territory in March, was released by a court on conditions of trial in the southern Hatay province late Thursday.

Arrested on the charges of "border violation" and "spying activities," he has been in prison ever since the crash.

The 56-year-old pilot bailed out of his Mig-23 warplane on March 4 as it crashed in a rural part the Yaylacık district of Hatay.

After a nine-hour search by a Turkish rescue team, he was found around 500 meters (1,650 feet) away from where his parachute had been spotted and some 40 kilometers (25 miles) away from the wreckage of his jet.

Sufhan was not in critical condition but had suffered some spinal fractures and was taken to Hatay State Hospital for surgery.

In his initial testimony, he said his aircraft was shot down on its way to strike rural areas near Idlib in northern Syria after taking off from the Latakia base.

After he was discharged from the hospital, Sufhan was arrested in relation to the case filed by the Hatay Public Prosecutor's Office on said charges.

Media outlets reported that Sufhan will be placed in a repatriation center for refugees.

Syria has been locked in a devastating civil war since 2011 instigated by the Bashar Assad regime when it cracked down with unexpected ferocity and disproportionate force on pro-democracy protests that began as part of the Arab Spring uprisings. More than 600,000 people have been killed and some 7 million people displaced as a result of the conflict.

Turkey, which shares a lengthy border with Syria in the south, is a staunch opponent of Assad and is a main actor in the efforts to stave off threats from the Daesh terrorist group in Syria. It has been advocating the establishment of safe zones for displaced civilians in Syria and strictly opposes a truce deal while Assad is in power. In 2016 and last week, Turkey started two major operations to back Syrian forces fighting the terrorist groups benefiting from the power vacuum in Syria's north. The operations were in response to the spillover of violence from Syria in areas near the volatile border. Turkish border towns have frequently been targeted by rocket attacks from the Syrian side. Likewise, Daesh militants have infiltrated the porous border and carried out deadly attacks in Turkish cities. In 2012, Syria triggered a major crisis with Turkey when Assad forces shot down a Turkish fighter jet, claiming it had violated Syrian airspace.