13 sentenced to life in trial over Türksat takeover 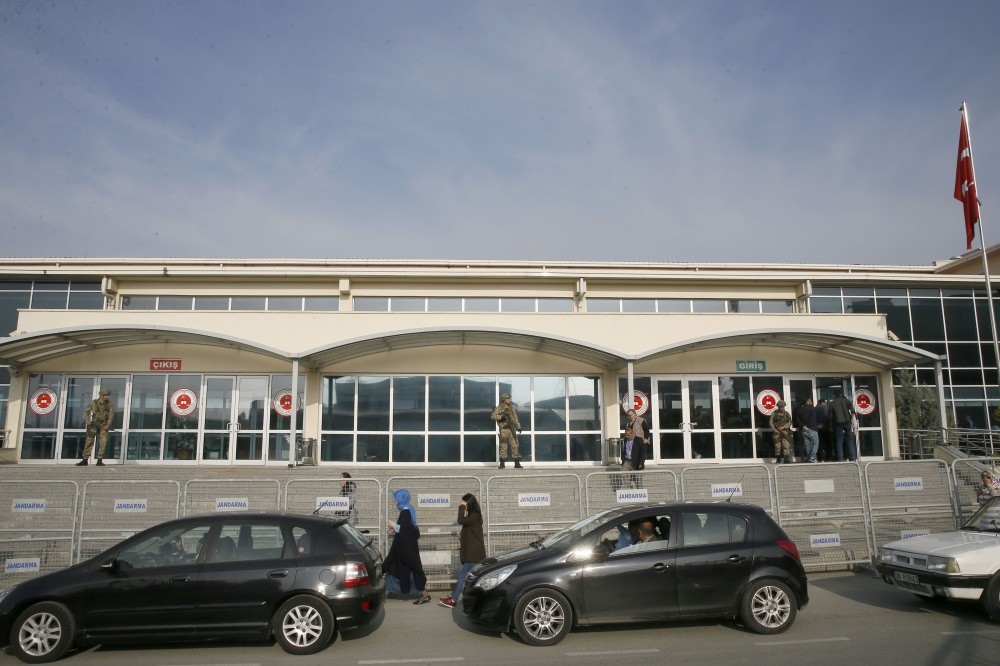 Soldiers stand guard at the entrance of the courthouse in Silivri, Istanbul, where FETu00d6-linked businesspeople are on trial.
by Daily Sabah Oct 24, 2017 12:00 am

Thirteen defendants were sentenced to life in prison yesterday for their role in the deadly takeover of Türksat, the country's main satellite provider, during the July 15, 2016 coup attempt blamed on FETÖ

A court in capital Ankara handed down aggravated life sentences yesterday to 13 out of 17 defendants in the latest trial on last year's deadly coup attempt that is blamed on Gülenist Terror Group (FETÖ) infiltrators in the military.

The defendants were military officers who tried to take over Türksat, the country's main satellite provider, in a bid to cut off national broadcasts during the coup bid that left 249 people dead.

Two Türksat employees, who attempted to resist the takeover, were killed by the invading putschists. The court also ruled for a separate trial for four other defendants, all fugitives, in the case.

Pro-coup troops ultimately failed to take the channels off the air thanks to the complicated process of terminating the satellite broadcast alongside the public's strong resistance.

The sentenced defendants included "civilians." It was discovered that pro-coup troops were aided by non-military suspects linked to FETÖ. In the Türksat case, former employees of FETÖ-linked companies were brought in to shut down the servers of the satellite provider. Similarly, FETÖ-linked engineers were captured while helping putschists take the public broadcaster TRT off the air.

Meanwhile in Istanbul, a trial against 86 defendants, all linked to the business world with alleged ties to FETÖ, opened yesterday.

If convicted, the defendants face up to 22 years in prison for membership to the terrorist group accused of carrying out the July 15, 2016 coup attempt that left 249 people dead.

Known as the TUSKON case, the trial involves members of the TUSKON business association that was shut down for its alleged financial support for FETÖ.

Of the 86 suspects, 31 are in custody, while three remain fugitives, including Fetullah Gülen, FETÖ's leader who has resided in Pennsylvania, United States since 1999.

Also being tried in absentia are Rızanur Meral, the ex-chairman of TUSKON, and the association's former secretary general, Mustafa Muhammet Günay.

Meral made headlines a few years ago when he openly threatened the government after a series of operations against Gülenists.

Among those in custody are Faruk Kavurmacı, chairman of the Aydınlı Group, and son-in-law of former Istanbul Mayor Kadir Topbaş.

Other prominent defendants are Faruk and Nejat Güllü, brothers and co-owners of the well-known Faruk Güllüoğlu baklava chain. Both companies were placed under the control of trustees after their owners were arrested in September last year.

The hearing in the 23rd Criminal Court at Istanbul's Silivri prison was attended by the lawyers of the 78 suspects.

The Chief Public Prosecutor's Office in Istanbul is seeking three aggravated life sentences for Gülen, Meral and Günay for attempting to overturn the constitutional order, Parliament and the government.

The trio also faces between five and 22.5 years for establishing and organizing a terror group, namely FETÖ, and forging documents as part of a terrorist offense.

Other suspects in the case face prison terms ranging from seven to 15 years for membership to a terrorist group.

The former soldiers are said to have been involved in the raid on the main Ankara offices of national broadcaster TRT on the night of the coup bid and are charged with having ties to FETÖ.

Arif Aydınoğlu, one of the jailed defendants, claimed he did not participate in the coup plot and blamed his superiors. Aydınoğlu said Muhsin Kutsi Barış, the commander of the regiment, asked him to make 8,000 rounds of ammunition available for "a military drill" on July 15.

He claimed he did not know a coup was underway when he was summoned by another officer to the base on July 15, 2016. He said he saw "martial law directive" documents sent by the Peace At Home Council, the group that oversaw the insurrection bid, and suspected that Barış might be involved.

"You have to be an idiot for not thinking it was actually a coup rather than a martial law declaration. It was obvious when I read the directive," he said.

Aydınoğlu claimed he did not obey pro-coup commanders' orders after seeing the directive and ordered soldiers under his command to lock up the armory.

Also ongoing is the case against 486 FETÖ suspects allegedly involved in organizing the attempted coup from Akıncı Air Base located just north of the capital, Ankara.

In Istanbul, 143 former police officers, including former police intelligence chiefs, are also on trial on espionage and illegal wiretapping charges.