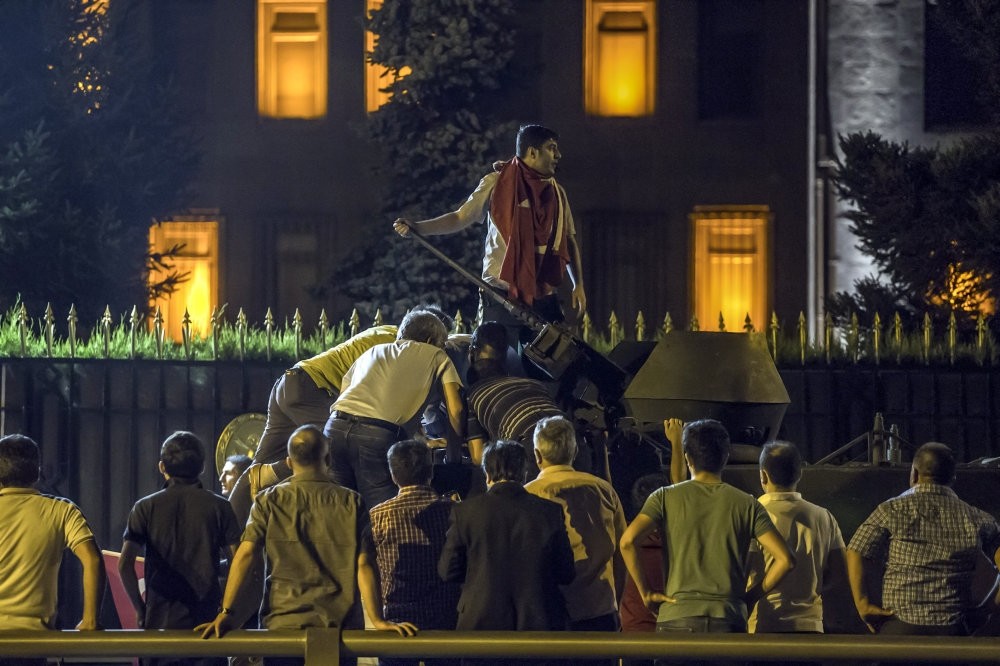 Citizens opposing the coup stop a tank driven by coup plotters outside the Office of the Chief of General Staff in Ankara on July 15, 2016.
by Compiled from Wire Services
Oct 31, 2017 12:00 am

A new week of trials on the July 15, 2016 coup attempt blamed on the Gülenist Terror Group (FETÖ) kicked off Monday with two significant hearings. In Istanbul, 67 defendants, including a former police chief linked to the terrorist group, appeared before a court in Silivri, where a large prison complex that houses hundreds of FETÖ suspects is located. An image showing Mithat Aynacı emerging from a tank while wearing a military uniform is among the most concrete evidence pointing to the group's involvement in the coup attempt that killed 249 people. Aynacı, a former police chief, had joined putschist troops when they went to take over police headquarters in Istanbul's Vatan Avenue on July 15, 2016.

The soldiers he accompanied are accused of killing four civilians resisting the putschists while Aynacı is accused of coordinating the takeover of his former workplace. In the capital Ankara, a new hearing was being held in the trial of 221 defendants, including the ringleaders of the coup attempt. The coup attempt was carried out by a group of military officers who called themselves the Peace At Home Council. Prosecutors say they are or are linked to FETÖ members.

FETÖ, which long disguised itself as a religious charity, is known for widespread infiltration in law enforcement, the military, judiciary and bureaucracy. Holding key positions in state institutions, the group moved to seize power first in two secret coup attempts in 2013. When this failed and after it was designated as a terrorist group, FETÖ tried to seize power again in the summer of 2016. Nevertheless, unprecedented public resistance called for by the country's elected leaders helped to quell the insurrection.

Fetullah Gülen, the U.S.-based leader of the terrorist group, repeatedly denied allegations of his involvement in the coup attempt. However, multiple pieces of evidence show the group's members were active in most stages of the coup attempt. Gülen is accused of approving the coup plot masterminded by Adil Öksüz, a senior member of the group who ran a secret network of FETÖ members in the military. Öksüz, who was captured at Akıncı Air Base at the heart of the coup attempt, remains at large after a court controversially ordered his release. Other civilian figures like Öksüz - who was a theology lecturer by profession - were captured at or near the same base and all were found to be linked to FETÖ.

In yesterday's hearing in Istanbul, one of the defendants detailed the role of Aynacı during the coup attempt. Aynacı was stationed at police headquarters in Istanbul before he was dismissed about one year after FETÖ's first coup attempts in 2013. He later petitioned to return to his position but was rejected. When an anti-coup crowd of police and civilians pulled him out of an armored personnel carrier full of putschist troops, Aynacı was wearing a military uniform. Ahmet Gök, a military school student who was in the same vehicle with Aynacı, claimed the former police chief instructed them how to act against the civilians gathered around them during the attempted occupation of police headquarters. Gök said he and other troops were unaware of the coup attempt and were sent to the police headquarters by their superiors, who claimed they were sent to prevent a terrorist attack.

"We were supposed to help the police against the terrorist attack. When we arrived at the police headquarters, Aynacı got into the carrier. He was wearing a police uniform. I thought he was responsible for coordination with police," Gök told the court. Aynacı was "always on the phone," Gök said, adding that Osman Akkaya, a lieutenant colonel, fired on the civilians gathered around them. Four people were killed when putschist troops fired on the crowd. "When Akkaya disappeared, Aynacı told us he was killed by the mob and told us to fire. We refused. Then, we heard the news that a coup was underway. Aynacı told us not to believe the news.

"He told us that soldiers took over all police buildings across Turkey and President Recep Tayyip Erdoğan left Turkey. We did not believe him and called the commander of the military school. The commander told us to surrender and we surrendered," Gök told the court. The defendant also said Aynacı tried to get rid of the military uniform he was wearing, but people pulled him out.

The indictment against Aynacı and others recommends three aggravated life sentences and up to 15 years in prison for all of the suspects, who stand accused of attempting to abolish the constitutional order, overturn Parliament and oust the government, as well as terrorist group membership. Some are also facing additional sentences of up to 990 years for murder, intentional injury and property damage, among other offenses.

In Ankara, defendants continued their testimonies as the trial of 221 defendants, including former generals, resumed yesterday. In the trial, which started in May, defendants are accused of commanding the coup attempt and taking over the Office of the Chief of General Staff, which serves as the headquarters of the Turkish Armed Forces (TSK). The suspects face life sentences if convicted of charges including using violence to trying to overthrow the government and Parliament and killings of civilians and soldiers.

The hearing was being held in a large courtroom specifically built for coup trials in Ankara's Sincan district. Along with low-ranking military officers, Akın Öztürk, the alleged head of the military wing of the coup plot, is among the defendants. This former air force commander was captured at Akıncı Air Base in the early hours of July 16, 2016. Chief of General Staff Gen. Hulusi Akar and other top military brass were abducted from the headquarters and were brought to Akıncı by coup plotters during the coup attempt.

At the start of the hearing, the judge told lawyers that nearly 70 terabytes of images from security cameras at the headquarters during the coup attempt would be given to lawyers. Security camera footage, at least those salvaged from destruction by coup plotters, had revealed the role of the defendants in the coup attempt even though some defendants went to great lengths to claim it was not them in the footage. One such footage published by media outlets a few months ago had shown a top military commander being handcuffed by putschists while his aide was shot dead.

A former major, Ali Gültekin, was the first defendant to testify in yesterday's hearing in Ankara. Gültekin denied accusations that he fired on civilians who entered the headquarters to confront putschists. He said he was right-handed and it was "clearly seen that [the person in the footage] was holding the gun in his left hand" in a security camera footage prosecutors presented to the court. Gültekin claimed he thought that a terrorist attack was underway against the headquarters while he was there on July 15, 2016. He said he took shelter in an operations center inside the headquarters.

Anıl Koç, a non-commissioned officer who was among putschist troops who raided the headquarters, also denied the accusations. Koç was accompanying Fırat Alakuş, an officer from the elite Special Forces who stormed into the Akar's room and took him hostage. Koç said he was dispatched to the headquarters for a drill to protect Akar. He claimed he did not know he was involved in a coup when he saw tanks entering the headquarters and said he "fell victim to a plot."

A court in Istanbul heard separate testimony from two prominent businessmen on trial over FETÖ's business arm. Textiles tycoon Ömer Faruk Kavurmacı and baklava shop chain owner Faruk Güllü are among the high-profile figures charged with membership in the terrorist group. Both men were detained following the coup attempt amid operations against thousands of members of the group in Turkey. Eighty-six defendants, all linked to the business world, face up to 22 years in prison for membership in the terrorist group. The trial is known as the TUSKON case, after the now-defunct business association.

Of the 86 suspects, 31 are in custody while three remain fugitives, including Gülen, Rızanur Meral and Mustafa Muhammet Günay. Meral is the former chairman of TUSKON and Günay is a former secretary-general of the association. Meral made headlines a few years ago when he openly threatened the government after a series of operations against Gülenists.

Testifying at yesterday's hearing, Kavurmacı denied any links to FETÖ and claimed he was "not among those who applauded Meral's speech," referring to the TUSKON conference where Meral made his threatening remarks about the government. Kavurmacı said he also protested Meral's speech and distanced himself from TUSKON after that incident. Güllü said at the hearing that he left TUSKON in 2010, and did not aid Bank Asya, a now-defunct lender that was associated with FETÖ. Güllü claimed he also took part in civilian resistance against putschists on July 15, 2016.