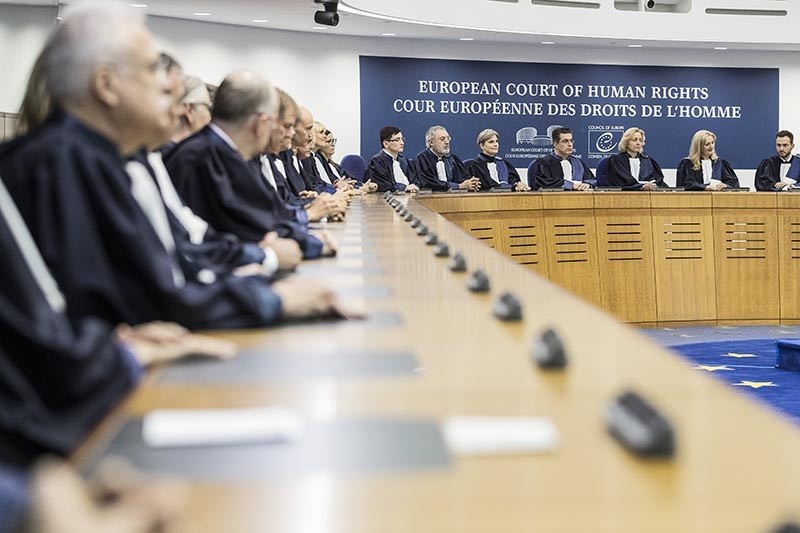 The European Court of Human Rights rejected to hear some 25,000 cases related to FETÖ suspects in the aftermath of last year’s coup, citing that the applicants had failed to exhaust judicial procedures in Turkey

The European Court of Human Rights (ECtHR) declined to hear roughly 25,000 cases related to those arrested or dismissed from duty after the July 15, 2016 coup attempt in Turkey that left 249 people dead.

The Gülenist Terror Group (FETÖ) is accused of orchestrating the coup with its infiltrators in the military and thousands of people have been arrested or dismissed from their jobs over suspected links to FETÖ since the coup bid.

The court rejected the cases on the grounds that the applicants had failed to exhaust judicial procedures in Turkey, a Justice Ministry official said on condition of anonymity due to restrictions on talking to the media.

Under Turkey's state of emergency laws, which have been in place since shortly after the attempted coup, those dismissed from their jobs are entitled to have their cases reviewed by a commission. The court referred to this procedure in its rejection of cases, the official added.

After mass arrests and detentions following the coup attempt, Turkey, which declared a state of emergency a few days after the insurrection bid, set up a committee to investigate legal proceedings against the suspects.

The State of Emergency Procedures Investigation Commission, so far, has received more than 100,000 complaints from people who have either been suspended or dismissed from their duties under cabinet decrees.

The commission received 101,304 complaints regarding dismissals, suspensions and various other decisions made under the presidential decree since the beginning of the state of emergency.

Apart from seven members of the investigation commission, it is believed that more than 200 people are working around the clock to finalize decisions regarding the complaints.

Three members of the commission have been appointed by Prime Minister Binali Yıldırım, one by the Justice Ministry, one by the Interior Ministry and two by the Board of Judges and Prosecutors (HSK).

The commission is authorized to request any information and documents from public institutions and judicial authorities except for documents, which are subject to confidentiality as part of an ongoing investigation or otherwise-classified state secrets.

Public institutions and judicial authorities are obliged to immediately provide the requested information to the commission and facilitate any inquiries.

Hundreds of people, arrested after the putsch bid, are currently on trial on coup and terror charges for links to FETÖ. Few civilian FETÖ members have appeared before the courts, as many managed to flee abroad before and after the coup attempt.

In Tuesday's coup trials, officers who took over the army headquarters in Ankara and other key military bases testified before the courts. The defendants claimed that they were "unaware" of a coup attempt and "tricked" or forced to obey the orders of their putschist superiors.