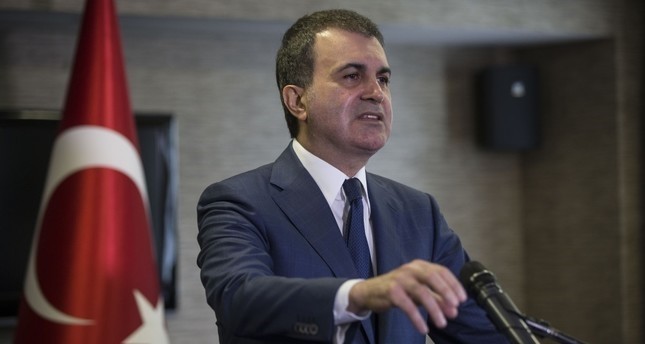 EU Affairs Minister Ömer Çelik on Sunday called for investigating the chain of command involved in the NATO drill in Norway during which the reputation of Turkish president and founder were tarnished.

Turkey withdrew from the Trident Javelin exercise in Norway on Friday upon depictions of President Recep Tayyip Erdoğan and founding leader Mustafa Kemal Atatürk as "enemies".

Speaking at the 9th annual Halifax International Security Forum in Canada, Çelik said the commander under whom the Norwegian civilian worked must also be investigated.

"Isn't there a chain of command? Doesn't he have a commander?" Çelik asked, underlining that this command chain should be investigated and necessary steps should be taken.

Turkey would continue to monitor the investigation of the incident and would like to ensure that such incidents did not happen ever again, he said.

He also added that the incident was similar to the method used by the Gülenist terror group (FETÖ) which orchestrated a deadly defeated coup in Turkey last year as part of a long-running attempt to overthrow the Turkish government.

"They [FETÖ] are using all their assets to harm Turkey, to create negative developments in Turkey. This is very similar to the method they use."

About the EU decision to cut €150 billion ($177 billion) pre-accession fund for Turkey, he said: "It is of no financial importance for Turkey".

"You envisage to provide this fund to Turkey on the one hand and then exhibit a serious lack of vision by cutting the fund on the other hand," the EU affairs minister said.

"While the EU expresses solidarity with Turkey on migrant and counter-terrorism issues, we don't see a similar solidarity for strengthening democracy and rule of law in Turkey," he said.

He added the bloc withdrew some defense systems from Turkey and did not show solidarity with the country following the July 15 defeated coup last year.

The EU and Turkey started membership negotiations in 2005, but the talks entered into a stalemate due to the Cyprus issue and the opposition of several EU governments to Ankara's full membership.

Ankara's relations with several EU member states, including Germany suffered further setbacks in recent months, as Turkish leaders slammed their counterparts for not showing solidarity with Ankara over the defeated coup attempt in 2016, and providing support to groups hostile to Turkey.