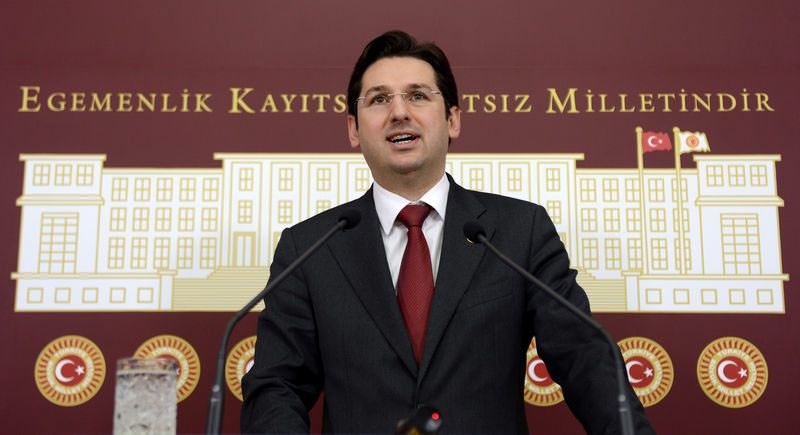 The arrest warrants were issued Monday after an ongoing investigation by the Istanbul chief public prosecutor's office. Both men are being charged with "stealing, deceit to take, misuse or destroy documents related to the security of the state."

Both names are mentioned in the prosecution's witness list in the lawsuit being handled in New York Southern District Court.

Canıtez was a former auditor for Turkey's Banking Regulation and Supervision Agency (BDDK). In January 2014, Canıtez had prepared a report on the role of the public-owned Halkbank's transactions that allegedly breached U.S. sanctions on Iran. This took place shortly after the Dec. 17 and Dec. 25 operations that were launched by prosecutors and judges linked to the Gülenist Terror Group (FETÖ).

The report was described as "so-called/fake report" in the Monday's document sent to the court by prosecution asking an arrest warrant issued for Canıtez.

In the aftermath of July 15, 2016 coup attempt, Canıtez could not be found in his address during an operation targeting FETÖ-linked bank auditors regarding irregularities in Bank Asya. Canıtez remains on the run, whereas he is also a suspect for using the Bylock app, which was used by FETÖ members and Gülen's sympathizers as a communication tool until it was deciphered by Turkey's National Intelligence Organization (MİT) in 2015.

Reports suggest that Metin Topuz, an employee at the U.S. consulate in Istanbul who was arrested in early October for his links to FETÖ and a brief visa crisis with Turkey, served as an intermediary in taking the confidential report from Canıtez and transmitting it to U.S. authorities.

Meanwhile, Erdemir, who served as CHP Bursa deputy between 2011 and 2015, is currently in the U.S. and works as a senior analyst for the Foundation for Defense of Democracies (FDD), which is known for its neoconservative, pro-Israel and recently anti-Turkey rhetoric.

FDD CEO Mark Dubowitz and Senior Vice President Jonathan Schanzer were appointed on Friday as experts on Iran sanctions by Judge Richard Berman, despite objections from the defense's lawyers. The judge also ruled not to allow the FDD's donations outside of public financial sources and that donors be questioned.

The investigation in the U.S. became apparent when Turkish-Iranian gold trader Reza Zarrab was arrested in Miami in March last year on charges of engaging in hundreds of millions of dollars of transactions on behalf of the government of Iran and other Iranian entities, which were barred by U.S. sanctions, while allegedly laundering the proceeds and defrauding several financial institutions through concealment of the true nature of the illegal transactions.

U.S. prosecutors also charged former Economy Minister Zafer Çağlayan, the former general manager of state-owned Halkbank Süleyman Aslan, and two others for conspiring to evade the U.S. sanctions on Iran. Zarrab and Halkbank Deputy General Manager Mehmet Hakan Atilla, who was arrested while in the U.S. in March 2017, were scheduled to stand trial on Nov. 27. Atilla has pled not guilty to the charges that accused him of conspiring with Zarrab.

Turkey has argued that the case has been turned into a political case against Ankara. Earlier this month, Deputy Prime Minister Bekir Bozdağ raised questions about the methods U.S. authorities used to obtain the evidence, saying that the case in the U.S. is a replication of the Dec. 17 and Dec. 25 probes.

"Is there a copy or originals of the evidence? How did FBI agents confirm this? Is there correct data?" Bozdağ asked.

He also stated that the defendants are being pressured to provide slanderous testimony that would help a court ruling against Turkey.

In addition to Bozdağ's criticism of the impartiality of the case, there have also been questions raised about the latest indictment against Zarrab and Çağlayan prepared by U.S. Attorney Joon H. Kim. The information and evidence provided in the U.S. indictment was presented against Zarrab during the Dec. 17 and Dec. 25 judicial coup attempt by FETÖ, which Ankara says was put together illegally, by methods including wiretapping and fabricated and bogus evidence.

In several places, the U.S. indictment refers to conversations between Zarrab and others, which was also included in the Dec. 17 and Dec. 25 indictment. However, it does not indicate how the information was obtained or where the conversations took place, raising the question of whether FETÖ is feeding New York prosecutors in an attempt to harm Turkey and Turkish interests and ultimately U.S.-Turkish relations.

U.S. New York Southern District Judge Richard Berman in Manhattan told prospective jurors in the case on Monday that Atilla is the only defendant on trial and Zarrab will not appear in court. Bozdağ said Monday that the U.S. applied pressure on Zarrab to force him to sign off on fabricated accusations as the 34-year-old businessman dropped out of sight in the two months leading up to his scheduled trial.

Also, Istanbul prosecutors previously launched an investigation against Preet Bharara, the former prosecutor for the case, and Kim, saying that the sources of the documents and wiretaps used as evidence in the U.S. case against Zarrab were unknown and violated international and domestic laws. The prosecutor's office cited a deposition from Atilla's lawyer, Cathy Fleming, which was given to the District Court for the Southern District of New York on Oct. 30.

"The files and evidence presented to the trial were plagiarized, tainted and unaccredited," the deposition said, and also cited "illegal methods" used to obtain the evidence.